Meghan Markle On The Effect Tabloid Bullying Had On Her As A New Mom: I’m ‘Not Really Okay’ 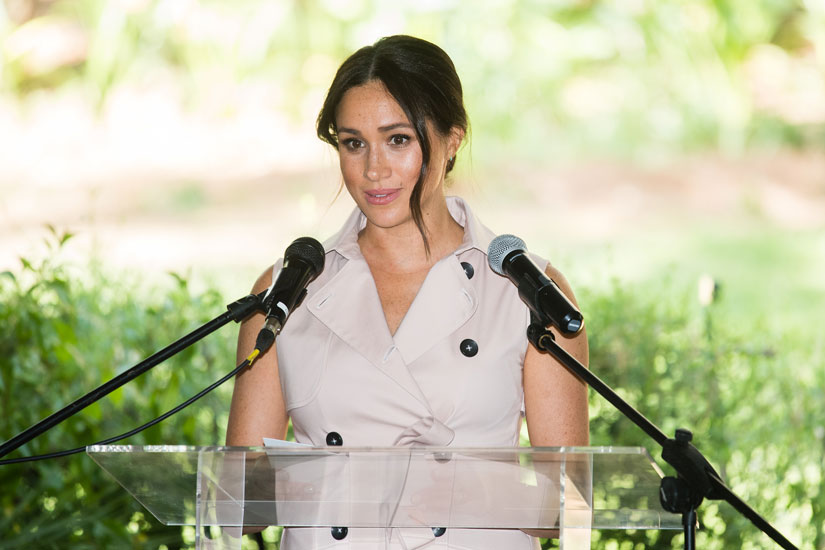 Meghan Markle, for the first time since joining the royal family, has spoken directly about how she has felt amid the UK tabloids’ constant negative stories about her as she adjusted to marriage, motherhood, and being a member of the royal family.

The Duchess of Sussex was asked about whether she was okay given the treatment she has received during ITV’s documentary Harry & Meghan: An African Journey. ITV released a clip today, ahead of the documentary’s premiere Sunday, of the Duchess’s response. Meghan was measured but emotional speaking to ITV’s Tom Bradby.

She said, “Look, any woman, especially when they’re pregnant, you’re really vulnerable, and so that was made really challenging. And then when you have a newborn, you know. And especially as a woman, it’s really, it’s a lot. So you add this on top of just trying to be a new mom or trying to be a newlywed. It’s um…yeah. I guess, also thank you for asking because not many people have asked if I’m okay, but it’s a very real thing to be going through behind the scenes.”

Bradby then asked if it “would be fair [to say you’re] not really okay, as in it’s really been a struggle?”

ITV’s @tombradby spoke to Meghan as he gained exclusive access to the royal couple as they toured Africa for 10 days with their son Archie.

During their tour of southern Africa, Meghan and Harry announced they would be suing The Daily Mail (for publishing a personal letter between Meghan and her father). Harry released a statement condemning the way British tabloids have constantly attacked his wife.

“I have been a silent witness to her private suffering for too long,” Harry wrote. “To stand back and do nothing would be contrary to everything we believe in. This particular legal action hinges on one incident in a long and disturbing pattern of behavior by British tabloid media. The contents of a private letter were published unlawfully in an intentionally destructive manner to manipulate you, the reader, and further the divisive agenda of the media group in question. In addition to their unlawful publication of this private document, they purposely misled you by strategically omitting select paragraphs, specific sentences, and even singular words to mask the lies they had perpetuated for over a year.”