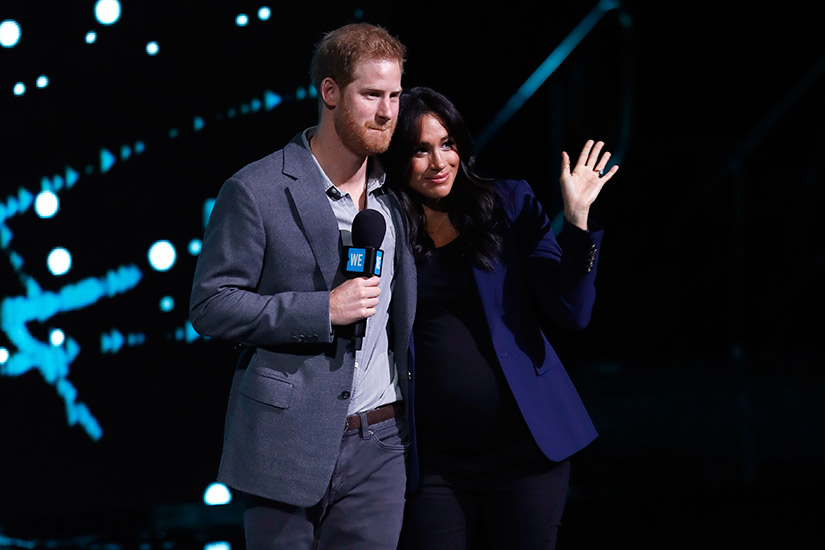 Here’s a fun surprise: Meghan Markle joined Prince Harry on stage this morning at the We Day UK event at Wembley Stadium. According to royal reporter Omid Scobie, Harry was making a speech at the event when he cited a quote from Martin Luther King Jr. that “Darkness cannot drive out darkness; only light can do that. Hate cannot drive out hate; only love can do that.” He told the crowd that Meghan often reminded him of the quote, and then she came out on stage to join him in an unannounced appearance.

Meghan dressed business casual in black pants, a black top and a blue blazer. Her hair was down, and she was very affectionate with Harry on stage. She put her hand on his back, held his arm, and was generally cuddly.

Meghan and Harry were last out yesterday at the Buckingham Palace reception that the Queen threw for Prince Charles’s investiture’s 50th anniversary. There, Harry and Meghan also showed a little PDA. Meghan wore a silver and gold brocade dress, by the way, with her Amanda Wakeley white coat and Paul Andrew high heels.

Meghan has one more event this week that’s announced: She will be out again on Friday for International Women’s Day. She’ll be part of a panel discussion at King’s College London with other activists to talk about the issues facing women today. Panelists include Annie Lennox (The Circle NGO’s founder), Adwoa Aboah (Gurls Talk founder), Julia Gillard (Global Institute for Women’s Leadership chair), Chrisann Jarrett (Let Us Learn founder), and Angeline Murimirwa (executive director of Camfed).