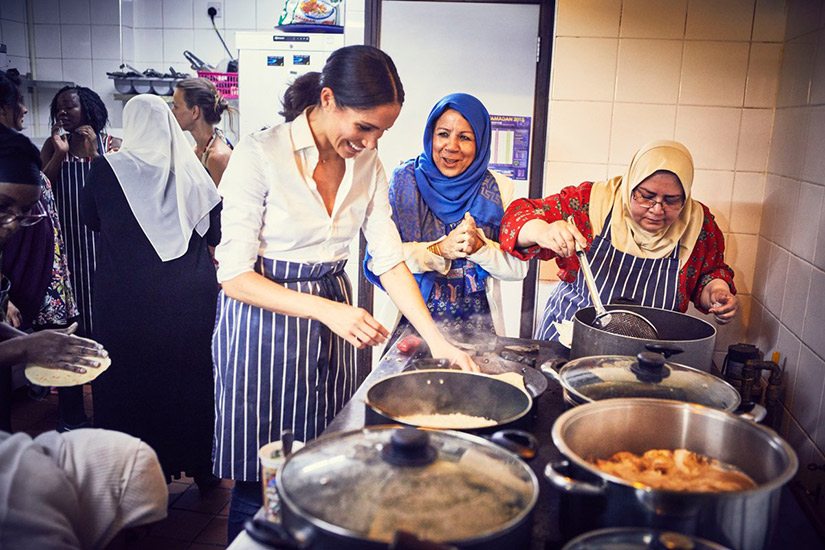 It’s no secret that Meghan Markle loves cooking. (I mean, Harry proposed over roast chicken, after all.) Now she’s using that passion on her first solo charity endeavour as a member of the royal family.

Kensington Palace revealed today that the Duchess of Sussex has collaborated with a group of women whose community was affected by the Grenfell Tower tragedy last year to create a community cookbook.

After the fire last year, these women had gathered in a local communal kitchen in west London so they could prepare food for their friends and family, eventually forming the Hubb Community Kitchen. According to the palace, Meghan first visited the kitchen in January and was immediately inspired by how the project empowered the women. When the duchess found out they were only able to keep the kitchen open two days a week, she suggested a cookbook to help raise money to keep it running all week.

The result is Together: Our Community Cookbook, which Meghan has written the forward to. She also filmed a short video in support of the group and project.

The Duchess of Sussex is supporting a new charity cookbook, ‘Together: Our Community Cookbook’, which celebrates the power of cooking to bring communities together. #CookTogether pic.twitter.com/XEclxgQjR4

“I immediately felt connected to this kitchen; it is a place for women to laugh, grieve, cry and cook together.” Meghan shares. “Melding cultural identities under a shared roof, it creates a sense of normalcy—in its simplest form, the universal need to connect, nurture and commune through food, through crisis, or joy—something we can all relate to.”

Profits from the sale of Together will go towards keeping the Hubb Community Kitchen open seven days a week and to help widen its reach. It’s available for pre-order in the U.K. now, and will be published on Thursday—but no word yet on if we’ll be able to buy it here in Canada.

Meghan writes very evocatively about the #CookTogether project and her own love of food and cooking in the foreword to Together, Our Community Cookbook (Ebury Press, £9.99) It’s published on Thursday, but go ahead and order yours today! pic.twitter.com/xR5tNAQ6FK