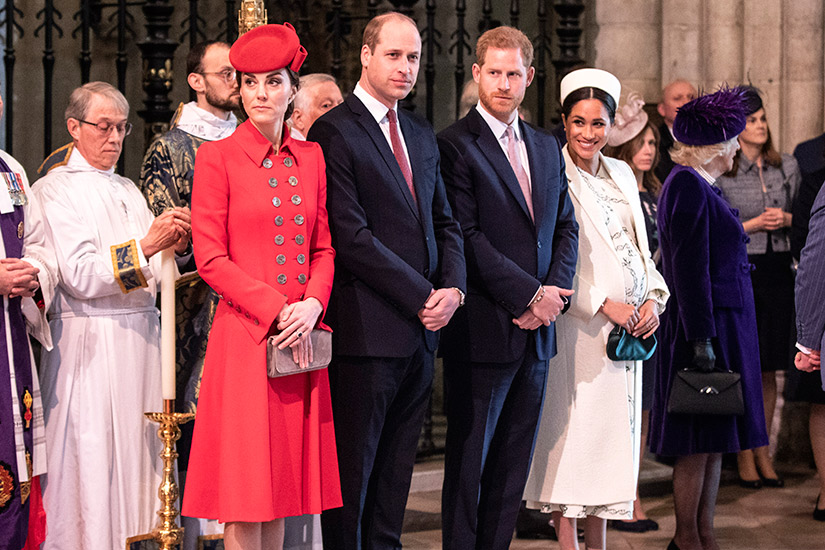 The Palace has just announced that Meghan Markle and Prince Harry will be getting their own royal household and individual team, separate from Kate Middleton and Prince William. Currently, Meghan and Harry’s office is based in Kensington Palace, where they share some staff with Kate and William.

As royal reporter Emily Nash tweeted out from the Palace, the Queen approved Harry and Meghan getting their own household “following their marriage in May last year.” The move has been planned for months and “will ensure that permanent support arrangements for the Duke and Duchess’s work are in place as they start their family and move to their official residence at Frogmore Cottage.”

Meghan and Harry will “base their Household Office at Buckingham Palace,” the Palace continued. Royal reporter Omid Scobie additionally revealed that there have been some staff change-ups. Staff-wise, William and Kate will keep Jason Knauf, now senior adviser, and Christian Jones, now communications secretary, on their team. (Jones and Meghan had been photographed getting lunch together in January.)

Meghan and Harry, meanwhile, will have their communications headed by Sara Latham, who was a senior advisor on Hillary Clinton’s 2016 presidential campaign. Latham will report “directly to The Queen’s Communication Secretary.”

Some may be quick to suggest that it was a feud between Kate, Meghan, and their husbands that prompted the move, since there have been (largely false) royal rift tabloid headlines. But the reality is, as a royal source previously told ELLE.com, Kate and Meghan were already slowly embarking on very different paths, along with their husbands. This is largely because of their husbands’ different roles in the monarchy.

Harry is sixth in line for the throne, behind all of William and Kate’s children. William, meanwhile, is second in line, and will become the new Prince of Wales when his father Charles becomes king. William and Kate will then begin to take a more high-profile role within the British monarchy, and having their own separate household to support that work is a natural change given that.