Meet the French Canadian actress set for the global bigtime 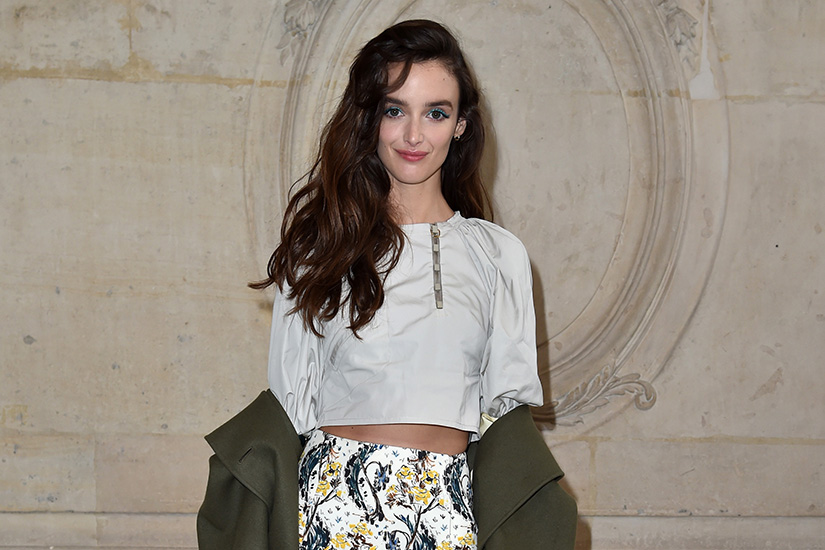 Just before she started filming The Promise, Charlotte Le Bon sent an email to her two co-stars. “I wrote to Oscar [Isaac] and Christian [Bale],” recalls Le Bon, miming out the action of typing as she sits in a Toronto hotel lobby. “I just said that I was super-intimidated by them both but I couldn’t wait to start. I promised that when I met them, I’d pretend everything was all right and it was fine, but I just wanted them to know that that feeling was there.” (BTW, Isaac wrote back right away saying he felt the same; Bale never replied.)

We’re catching up with the French-Canadian actress the day after that film’s premiere at the Toronto International Film Festival, and her relief at the romantic epic’s positive reception is obvious. “We had a standing ovation. There were a lot of Armenians in the room, and it was really moving to have them come up to us afterwards with tears in their eyes, thanking us for our work. That’s exactly why I want to do my job.”

In the film, to be released early this year, Le Bon plays Ana, a cosmopolitan Armenian woman who returns home to what is now modern-day Turkey (then the Ottoman Empire) on the eve of the outbreak of the First World War—and the start of the genocide of much of that country’s Armenian population by the Ottoman authorities. (It’s worth noting that Turkey still officially denies this ever occurred.) Ana also finds herself in the middle of a love triangle, torn between an American journalist (Bale) and an Armenian medical student (Isaac).

“I think she really doesn’t know [who to choose],” says Le Bon. “Love is a weird and complex feeling: Sometimes you choose passion; sometimes you choose comfort. I think it’s a modern approach to a love story because although it’s not completely politically correct to say she’s in love with two men, it happens in real life.”

That complicated romantic situation isn’t the only true-to-life parallel the 30-year-old noticed while filming the Terry George-directed epic, which centres much of its action on a group of Armenians (and Ana) trying to escape through the mountains. Two summers ago, Le Bon and her boyfriend were on the Greek island of Lesbos, which, along with being an idyllic vacation spot, is also the site of a large refugee camp filled with migrants from Syria, Iraq and Afghanistan fleeing conflict.

“I just remember seeing hundreds and hundreds of people walking in the street in the heat,” recalls Le Bon. “You really don’t know what to do. We bought water bottles and we were trying to give what we could. You’re trying to choose—maybe give to this one because she’s older, this one has a baby. You feel completely helpless.” Fast-forward to shooting The Promise in Spain about a year later: “Seeing those hundreds and hundreds of extras going down the mountain, I was like, ‘Fuck—this is exactly what I saw [in Greece].’ It’s awful to see that 100 years later, nothing’s really changed. Humans are worse than rats! We don’t learn.”

At another point in our conversation, Le Bon complains about her eyes (“They’re too big, especially on a movie screen”), but seeing her use them to persuade, to impart passionate caring, you get a sense of why this Montreal-born performer is already a big deal in her adopt-ed home of France—and why Hollywood has come calling. Le Bon is basically the definition of French-girl cool, down to an endearing overlapping front tooth that seems impossibly chic. (She’s probably pictured beside the word “gamine” in the dictionary.) She started as a model, served briefly as a weather girl on French TV and then got her big acting break in the 2014 biopic Yves Saint Laurent, which was quickly followed by a role in the Golden Globe-nominated The Hundred-Foot Journey and a star turn opposite Joseph Gordon-Levitt in 2015’s The Walk.

And while Le Bon loves acting, she says she feels most like herself when she’s drawing. (And it’s no hobby; she opened her first solo show in Paris this summer.) “The thing with acting is that it goes through so many filters that in the end you can’t control anything, but with art the delivery is so pure because it’s you, it’s just you.”

She says being an actress is work—not so much “what happens between ‘Action’ and ‘Cut’” but what she calls “all this stuff,” gesturing to the elaborately embroidered dress she’s wearing for a day of television interviews, her heavily-made-up face and her carefully coiffed hair. “This is not my favourite thing, you know?” she says. “I wear no makeup in real life, and I wear jeans and sneakers.” Even when it’s for a role, Le Bon finds the beauty routine tiresome. “Sometimes I’m like, ‘Ugh! I just want to do everything without makeup. Can I do that?’ I mean, Christian and Oscar arrived in jeans without makeup. It’s freaking unfair!”

But Le Bon insists she’s not letting down the Canadian side by throwing any tantrums or being difficult. (Although she does half-jokingly threaten to “start a revolution” when it comes to these gender-based double standards.) “The thing people say is that I’m unusually nice,” she says of being unashamedly Canadian. “I’ve been living in France for seven years now, and it’s actually true that we are so nice. Even when I come back now, I’m surprised by how easy and relaxed and cool it is socially. I’m used to the Parisian attitude now, so it’s almost weird!”

Oh, and if you’re wondering how Le Bon eventually fared on-set with those “intimidating” co-stars—well, she and Isaac ended up hanging out all the time (when he wasn’t jetting off to promote Star Wars: The Force Awakens, that is), and she basically became a one-woman fan club for Bale. “I think I laughed at every single one of his jokes for four months,” says Le Bon of her on-set “best pal.” She does note, however, that Bale was very much about doing his own thing. “He’s very present, very professional—but when it’s over, he just disappears like Houdini. Poof!”

Bale even pulled a disappearing act on the last day of filming. When the final shot had wrapped, Le Bon went to find him so she could give him a drawing she’d done for him…and he’d already bailed. (Bale-d?) “I asked everyone where Christian was, and they were like, ‘He’s already on a plane! He’s gone!’ and I was like, ‘Shit!’ But, really, it was fine.”

And then it’s Le Bon’s turn to go, gracefully picking up her skirts as she rises from the table, straight from our chat to a flight bound for Paris.