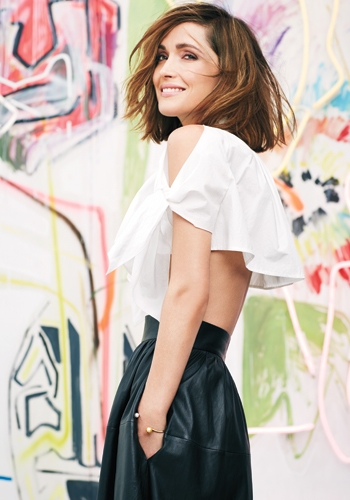 Though she doesn’t look it, Rose Byrne is tired. She has just spent 24 hours trapped on one circling, snow-delayed flight after another, trying to get back to New York from Max Mara’s show at Milan Fashion Week.

She’s standing in the midst of a chic
New York gallery, flanked by fine art, the eerily cheery glow of neon radiating against her skin. A freezing breeze sweeps in from outside, ruffling the scant Paule Ka top she’s wearing. A couple just tottered in off the street, hoping to check out the art show, inadvertently walking into our fashion shoot. I brace myself for Byrne to bristle—either at the cold or because she’s exhausted, or because two strangers are strolling around the set, stepping blithely over cords. Instead, she just smiles.

“New York is fantastic,” she says with a laugh. “People don’t care who you are when you’re walking around the streets.”

That kind of unflappable cool is what her character is searching for in her latest film,
Neighbors. Byrne and Seth Rogen
play a couple desperately trying to convince themselves that getting married, having a baby and moving to the suburbs hasn’t killed any youthful edge they’re clinging to. (“This is happening!” yells Rogen when they have sex.) When a noisy fraternity—helmed by Zac Efron, whose abs ripple like a Ruffles chip—moves in next door, it seems like a chance for the couple to redeem their lost youth, before the situation rapidly descends into all-out war, suburbia-style.

There was a time when Byrne was “far more interested in being taken seriously.” Born in Sydney, Australia, she moved to New York and made her name in 2007 as Ellen Parsons in the hit suspense series
Damages alongside Glenn Close. That was before she slipped Valiums to Kristen Wiig when she played the uptight Helen in
Bridesmaids and before she brain-shamed Owen Wilson in
The Internship. “Once I got the opportunity to do something funny, I realized that it’s actually so much harder,” she explains when we talk again a week after the shoot. “Well, hard for me,” she adds, letting out a soft, kind-of-self-deprecating laugh that punctuates many of her statements.

In
Neighbors, she’s happily freed from playing the tight-lipped foil to other people’s antics.
Variety proclaims that Byrne is “the most foul-mouthed matriarch this side of
August: Osage County.” There are few better compliments than being able to out-curse Meryl Streep. “My style of improv is a little ephemeral,” she says. “Sometimes I can really tap in and other times I’m just absolutely terrible, so it is daunting. Seth is so effortless— he made me feel brave.”

Courage is required to ad lib in a film that leans on risqué pranks. (Roll camera: Your baby finds a used condom! Convince two girls to make out in order to manipulate their boyfriends!) “My character is a reformed
party girl who is trying to keep it together and is a little bit ditzy—you know, those airheads,” she says with a smirk. In fact, Byrne describes herself as “dreadfully disciplined.” “I don’t go out and party—I just don’t have the stamina. My nickname is Nana Byrne.”

Maybe that’s why her ideal Saturday night involves staying home and perfecting her still-shaky recipes for spinach pie and roast chicken. “I’m not a good cook, but seeing someone enjoy what you’ve made is so satisfying,” she says. Byrne has been dating smouldering actor Bobby Cannavale since 2012—quietly at first, and then she arrived as his date at the Emmys and the Boardwalk Empire actor thanked “the love of my life, Rose” during his acceptance speech for best supporting actor.

Byrne’s voice is as soft as velvet when she talks about him. I mention that the vibrant art in our cover shoot was inspired by the great romantic poets. “To be honest, I’m not naturally that much of a romantic person—Australians don’t like making a fuss,” she says with a sigh. “I have trouble with things that feel very manufactured, like Valentine’s Day. I’m trying to get better at romance.”

Nevertheless, Byrne and Cannavale are sharing the screen in the hugely anticipated Jay-Z-produced recasting of Annie. Byrne takes on the singing-and-dancing role of Grace, while Cannavale plays the scheming anti-hero. “I was initially nervous,” she says of the decision to work together. “Clearly, it could have not been a good idea, but it was very fun to have a really great friend on set. It was nice to share our day.”

Being cast in the dynamic remake, starring Jamie Foxx and Cameron Diaz and set to hit theatres in December, was actually a
dream realized. Byrne grew up watching the 1982 production of
Annie. “I loved that film!” she says. “But when I was little, it was all about who got to play Annie, you know? I didn’t have red hair, but I had curly hair, so that was always my plea!”

It’s the first time Byrne is revealing her soprano and side shuffle. It could seem a dicey move—few pull off the triple threat with aplomb. But Byrne’s not worried. “In old Hollywood, every actor could sing and dance and act,” she says. “Still, people are uncomfortable with that. I think that’s really judgmental and dull. Life is too short to narrow yourself down to one thing.”

It’s a confidence that has come with age. The 34-year-old has been acting since she was eight and is “flying steady now.” Actually, one of the few things that seem to faze Byrne is the persistent masculine slant in the entertainment industry. “I am always drawn to a female protagonist and delighted when I find something to watch like Girls, which is so great.” But despite Byrne’s success, she’s constantly being told that “they’re waiting to cast a guy” before she can be considered for a part. It’s a frustrating thing to hear. “But, you know, the world is round!” she shouts with a laugh, quoting fellow Aussie Cate Blanchett’s recent Oscar speech, which called for the industry to recognize the power of female leads.

“It’s not just people complaining; it’s literally true,” says Byrne, explaining that she was on the committee for the Screen Actors Guild Awards a few years ago and had to consider every eligible performance. “There were, like, four to five pages for the lead actors and only half a page for the lead actresses. It was a stark reality right in front of me on paper. That was a really big reality check for me—it was quite depressing, to be honest.”

So Byrne may not be a romantic, but she’s an appealing pragmatist. Even her dispiriting realizations are followed with a soft laugh and a shrug. She’s excited about the future, challenges and all—much like the way she found joy in startled passersby stumbling onto our set. “I think we all have to embrace risks,” she says. And, whether she likes it or not, there’s something kind of romantic about that idea.

Read more:
Why Shailene Woodley doesn’t want to be the next Jennifer Lawrence
Controversial pop star Rihanna on home and career
Why Emily VanCamp is not the girl next door
Superstar Katy Perry on life and love