From sailor to smash hitmaker, she’s the next big thing in pop. 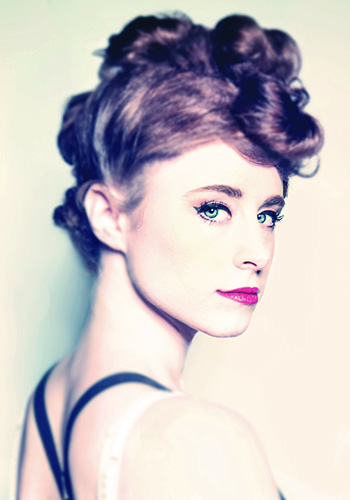 In Canada, we are pretty good at producing superstars with unlikely origin stories (ahem, Drake). But Kiesza, the singer-songwriter poised to have the dance hit of the year, takes things to a whole other level: She is a former Miss Canada hopeful who almost became our first female sniper before deciding to write music for Rihanna.

Kiesza (real name Kiesa Rae Ellestad) is the 25-year-old Calgarian behind “Hideaway”—the ridiculously danceable house beat that debuted at number one in the U.K. in April and was the third-fastest-selling single of the year across the pond. “I had absolutely no expectations!” says Kiesza over the phone from the back of a car in London, her base for the summer. After all, she wrote the song in less than an hour.

The self-described “Prairie girl” grew up figure skating and playing hockey on the outskirts of Calgary. She was “very, very artsy” and dreamed of becoming a prima ballerina until a knee injury at 15 put an end to her dance career.

Luckily, Kiesza had other interests, like music (the “first ever” song she wrote, a folksy tune about her parents’ divorce, was played on local radio when she was 18) and sailing, a passion that led her to join the Royal Canadian Navy. While there, she proved to be an exceptionally good shot and was actually offered a spot in the sniper-training program. “I never would have done it,” she says. “I could never actually pull the trigger on a human being.”

Your weekend playlist: What the ELLE team is listening to now

And anyway, by this point she had begun to find the rigidity of the Navy stifling—and the thrill of performing in front of her shipmates addictive.

After studying music at Selkirk College in British Columbia, she transferred to the prestigious Berklee College of Music in Boston. By the time she graduated, Kiesza had begun to make a name for herself by writing for other artists, including Icona Pop and Kylie Minogue. “I had a strength for being able to jump genres,” she says. “If I listened to something for even a little bit, I could absorb the vibe and pick it up quickly.”

Now, fresh off a plane from a recording session in Germany, she has nearly finished her debut album and promises listeners a little bit of everything, including R&B, soulful ballads and plenty of dance music. “When you put out a song and it goes to number one, everyone wants you to write ‘Hideaway Part II.’ I refuse to do that.”

That said, she owes that one song an awful lot. Written with her producer, Afuni, “Hideaway” came at a time when the musician was struggling to find her artistic identity. (A disco-pop phase was preceded by a rock band, a brief death-metal episode, wedding singing and beginnings in two-chord folk.) “I just said to myself, ‘Let go, and it will come.’ And within a month I had written ‘Hideaway,’ and I knew that it was the song for me.”

The song was posted online, where it caught the eye of tastemaking DJ Annie Mac, who played it on her radio show. Within a week, the track had 200,000 SoundCloud plays. And then came the video, a critically acclaimed (with comparisons to Michael Jackson!) four minutes of Kiesza, in her now-signature crop top, high-waisted jeans and “1940s punk” hair, dancing (with a broken rib, BTW) in the streets of Williamsburg, Brooklyn.

“We didn’t have a permit or anything,” says Kiesza. “There was no budget! We rounded up our friends and just danced in the street. You can see there are joggers going by.”

Now, between touring and starring in a summer video for Fendi, she is writing a screenplay “that’s still very new,” planning an exhibition of her “surrealist” paintings (she designed her album cover) and working on guerrilla art. “I stole a ceiling tile from a building the other day, and I’m going to paint it and then put it back,” she explains, before laughing. “Yeah, there’s a lot of different sides of Kiesza, I guess.” We’ll just have to wait and see which one she reveals next.