Me, Myself and I: Carly Rae Jepsen

After a frenzied rise to pop stardom in 2012 thanks to the megahit “Call Me Maybe,” today Carly Rae Jepsen is learning what life looks like left of centre. 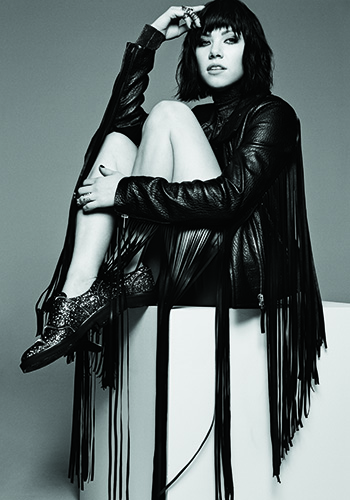 Carly Rae Jepsen emerges from the dressing room wearing a crystal-beaded flared mini, black Chelsea boots and a customized lamb-leather and neoprene motor­cycle jacket by Rudsak thrown over her shoulders. It’s one of the final looks of the day for her cover shoot, and the whole room can hardly contain their excitement. But after a couple of shots, Jepsen wonders aloud if the outfit is working and quietly asks if she can try another look.

She disappears for a moment with the stylist, and a switch is made. She reappears in a black miniskirt and semi-sheer black turtleneck crop top by Mugler with the same leather jacket thrown over her shoulders—and this time around, the look has the 29-year-old pop star twirling. This may seem like a relatively small change, but for Jepsen it’s a noted triumph as she navigates her way back into the public eye after spending almost two and a half years away from the music industry.

“I think I’ve learned a lot about myself,” the Canadian star says just minutes into our conversation after the shoot. “Even learning that I could say ‘no’ or that I didn’t have to be the ‘yes girl’ all the time was a really important lesson.”

A hard-won lesson, no doubt, especially after her 2012 worldwide hit “Call Me Maybe” catapulted her—practically overnight—into the centre of pop-star fandom, a scenario that the artist calls both a “fairy tale” and a “double-edged sword.” (It’s hard to say no when you feel lucky just to be in the room.) “When I first moved [to L.A.], I still felt like a little girl, even though I was 26. I was just very grateful for everything and scared to say anything,” recalls Jepsen. “There were so many things that I wouldn’t be vocal about. This time, I’m a little bit less afraid and more in control.”
Rewind back a few years, and Jepsen, who’d moved from Mission, B.C., to Vancouver, had worked her way up from being a part-time barista and sleeping on a friend’s couch to finishing third on Canadian Idol in 2007. The following year, she released her first solo album, Tug of War. Things were quiet on the career front until 2011, when she released the single “Call Me Maybe” while working on her sophomore album. After her song reached number 11 on Canadian iTunes, Jepsen was ecstatic: “I kept thinking ‘Dad, look! I’m making money from music!’”

It was then that Jepsen hit the social-media jackpot: Justin Bieber and Selena Gomez tweeted about the song after hearing it on Canadian radio. It suddenly skyrocketed to number one in 15 countries, selling more than 12 million copies, and became the bestselling single worldwide in 2012. It was also the first song by a Canadian artist to reach the top of the Nielsen SoundScan Digital Songs chart since Bieber’s “Baby” in January 2010. It’s the kind of success that many dream about but few obtain (a good old-fashioned fairy tale indeed).

While Jepsen attributes most of her success to luck (“It was just the right song at the right place at the right time”), many critics have noted that she is able to do what few pop stars can do today: create a hit song that everybody—from your 16-year-old sister to your 70-year-old grandmother—truly loves. Just Google “Call Me Maybe Parody” and 357,000 entries come up; even the likes of Taylor Swift and Rihanna have never been able to achieve that.

But Jepsen, who rushed to create her third album, Kiss, in under two months to capitalize on the success of “Call Me Maybe,” quickly began to feel like it wasn’t really about her anymore. “I’d show up to a [writing] session and people would be like ‘You’re just here for decoration; we’ll write the song and give you credit,’” she says. And after being repeatedly asked how she was going to top “Call Me Maybe” by management and writers, Jepsen decided that she’d had enough and called it quits.

Want to know what happens after the fairy tale ends? For Jepsen, it involved a two-year break, quietly living her life between New York, L.A. and Sweden and slowly but surely taking back control. “I’d rather be able to morph and change naturally,” says the artist. “I got to this place where I remember being like ‘I don’t want to make “Call Me Maybe”’ again!” she says, laughing, and then quickly adds, “That was an amazing time in my life, but to have to recycle the same sort of song forever is just not inspiring to me.”

READ MORE: All the celebrity break ups of 2015 so far

For most of 2014, Jepsen played Cinderella on Broadway (alongside Fran Drescher), and while many critics speculated that this was the beginning of the end for Jepsen’s music career, the artist notes that it was precisely because of her role on Broadway that she felt compelled to make another pop album. “I think doing Cinderella really placed me outside of what I thought was the whole world,” she says. “Being around people who not only didn’t care if you were in the pop world but actually preferred if you weren’t took my head out of that game in a really healthy way. Suddenly, it wasn’t about sitting down and writing a song but having an idea while walking through New York City and thinking ‘Where’s my phone?’”

After recording what would later become her title track, “Emotion,” while still on Broadway (“The night I recorded it, I had to do a show, and afterwards the director asked me why Cinderella sounded like Janis Joplin!”), Jepsen knew it was time to get back into the studio.
Two years—and 200 songs—later, Jepsen is finally releasing her fourth album, Emotion (out August 21). Instead of rushing and trying to make split-second decisions about her sound and direction, the star took her time, working on songs for weeks, in multiple cities and with multiple writers, including Dev Hynes from Blood Orange, Rostam Batmanglij from Vampire Weekend and pop superstar Sia—a process that she says “suits [her] personality more.”

“I wanted to experience something different with Emotion. I was reaching out to people myself; [the collabs] may seem a bit un­expected, but it was important for me to try and work with them. I gave myself time to experiment and make some left turns,” she says. “I think it’s hard for artists when they’re known for one type of music—you go through this rebellion stage and think ‘But I’m so much more!’ And I definitely felt that. So I wrote about 200 songs just for me and my own heart.”

READ MORE: Ellie Kemper is ready to be a leading lady

The resulting album is a 17-track synth-heavy ode to 1980s pop that looks to strip away the artist’s sugary-sweet vocals of the past in order to reveal a richer, sultrier sound. Listening to a lot of Madonna, Prince and Cyndi Lauper during the recording process, Jepsen knew that it had to be a 1980s album from the get-go. (“That’s when pop was at its finest!”)

Her first single, “I Really Like You,” already has 64 million views on YouTube. (The video features yet another collab, this time with Tom Hanks.) However, it was a song she was hesitant to release. “It was a big debate, actually,” says Jepsen. “You’ll find that the sound sort of stands alone.” It’s true: Out of all the songs on the album, this one is most rem­iniscent of Jepsen’s “Call Me Maybe” days. But, in the end, the artist agreed that it was a good transition for fans, and she’s hoping they’ll want to discover more. “I want to push past what traditional pop can be; it can be hooky, but I was trying to be really honest about how I feel and bare my soul a little.”

Perhaps Jepsen’s interest in being “really honest,” with her fans and herself, can be attributed to the fact that she’s turning 30 this year. “So far every year that I’ve gotten older, I feel more confident in knowing who I am,” she says. “And there are a lot of people in my life who keep telling me that my 30s will be the best decade ever!”

Jepsen has also transformed her look to match her current mood. Shedding her girlie boho dresses and long, flowing hair for menswear-inspired pieces and a very fitting 1980s Ally Sheedy haircut, the artist is trying a more androgynous look on for size. “I think it started in Sweden,” she says. “I want to wear things now that make me feel strong and empowered rather than sexy and cute.” She also dyed her hair jet black while on a 25-city European tour to promote “I Really Like You.” “It was sort of this bouncing-around effect, where you’re not really sure which country you’re in, and I found myself getting to a point where I was like ‘I need to dye my hair black!’” she says, laughing. “I just need a bit of ‘emoness’ at the moment.”
And could she also be feeling a bit nervous about releasing an album that is so close to her heart? “I don’t have that feeling, and I don’t know if I should,” says Jepsen. “My emotions are all off. But mostly there’s just a real hunger to get this music out there and for people to hear the other songs.”

READ MORE: Who is Ruby Rose?

If she’s nervous about anything, it’s coping with the celebrity side of the business. “I feel like that was a weird adjustment for me,” she says, remembering her first go-around with fame. “I was intro­duced to so many socialites who would invite me to red-carpet events. But I was like ‘Meh! I’d rather just go to a whisky bar and not have to go out!’” (She still doesn’t, unless she’s touring.) Jepsen is mostly feeling “proud” and “excited,” and she still counts herself lucky—but this time for an entirely different reason: “There have been many fairy godmothers along the way that just keep offering me opportunities,” she says. “But this time, I have people who, instead of forcing me to do something I don’t want to do, get what I’m trying to create and are helping me make it even better.”

READ MORE:
Ellie Kemper is ready to be a leading lady
Bella Thorne on keeping it real in Hollywood
Taylor Schilling on living authentically