From How I Met Your Mother to her latest big-screen role, Cobie Smulders is getting ready to steal the show. 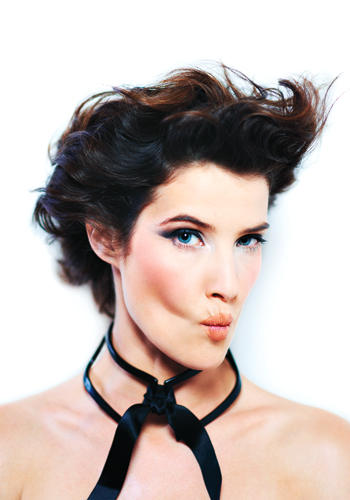 Cobie Smulders is looking for a plastic bag. Any bag will do, really. She’s opening all the drawers in the hotel room. Looking under the sink. She finds a FedEx envelope, but that won’t work. She really wants Paul, the prop guy, to take some leftover bagels home with him—after all, they shouldn’t just go to waste, and Paul loves bagels.

I’m standing there, after our eight-hour cover shoot in L.A.’s Redbury Hotel, watching her rush around in a simple white tank and floor-skimming cerulean Rachel Zoe skirt, and the only thing I can think is “Seriously?”

I shouldn’t be surprised, though. It’s actually the second time I’ve seen her demonstrate such telling thoughtfulness. That very morning, when the shoot producer scalded her own stomach with boiling water, Smulders took off down the hallway in her robe to get some ice, darting away like a willowy terry-cloth ghost.

When I tell Neil Patrick Harris, her costar on the hit sitcom How I Met Your Mother (HIMYM), about her random acts of kindness, he isn’t surprised. “She can read people well and quickly pick out when I’m having a bad day. I appreciate that since I’m all over the place—I drink Red Bull,” he says, laughing. “I always find that Canadians have a great sense of humour and are almost uniformly grounded and cool to hang out with—but she’s also the super-hot chick on the show, and usually the super-hot chick is not what I just described. Cobie defies all that.”

I see what he means. The striking Vancouver-born actress is explaining that HIMYM’s creators made her character, Robin, a news anchor living in New York, Canadian because they think our country is “kind of exotic.” Then she suddenly stands up and launches into a dramatic monologue about being an “exotic” babe from the Great North. “Do you like tundra weather?” she coos. “Because that’s where I’m from….” We dissolve into giggles.

Her willingness to look ridiculous is pretty intoxicating. She uses silly voices and makes ugly faces to underscore a joke. But despite the theatrics, I’m left with the impression that her readiness to plunge into the comedic deep end stems more from a desire to put others at ease than to steal the spotlight for herself.

However, she’ll be stepping into focus this month for the big-screen role of tough-as-nails agent Maria Hill in
The Avengers—a remake of the classic Marvel comic series that is projected to be one of the biggest film franchises ever, despite the fairly spectacular flops of previous
Avengers remakes.

“It’s intimidating,” says Smulders of the up-to-nine film deal that casts her alongside Robert Downey Jr., Scarlett Johansson and Samuel L. Jackson. But her fiancé,
Saturday Night Live’s Taran Killam (yes, he’s the guy in the amazing Linsanity skits), didn’t let her get timid during auditions. “I appreciate the art behind comic books, but my fiancé is a big comic-book guy—like really big. He was really excited about this movie from the beginning and was like, ‘You’ve got to get this! Don’t screw it up, man!’” she says, white-knuckling her hands together in a mock plea.

But she had no reason to panic. For auditions, director Joss Whedon prepared a test scene in which hopefuls basically had to wave a gun in Jackson’s face. “We had five actresses read with Sam, all of them very accomplished,” explains Whedon. “But when Cobie pointed her gun at him, I thought: ‘Oh, God! She’s gonna shoot!’ She stood toe to toe with him—without ever having to push for it.”

Frankly, though, Smulders is used to rising to the occasion. She quickly juggled priorities after having her daughter, Shaelyn, three. Her pregnancy was a surprise; she and Killam had wanted to settle down a bit first, but “it was the upstairs plan,” she says sincerely, pointing toward the heavens, before adding “Downstairs plan too, I guess!” and cracking up. While balancing studio meetings, “weekend warrior” trips from L.A. to NYC to see
SNL, a packed shooting schedule and, you know, a toddler is dreadfully hectic, Smulders isn’t one to moan. Instead, she happily chats about taking Shaelyn to Albuquerque, N.M., for a month to film
The Avengers. “She was such a trooper, but it turns out that my child is not a desert child. She was practically picked up by the wind. It was so cool introducing her to such a beautiful place, though.”

Cobie Smulders talks travel, modelling, and her upcoming wedding on the next page…

Watching her kid get buffeted in the face with desert sand doesn’t sound particularly romantic, but Smulders seems completely taken by the place. Actually, she has loved any sort of travel ever since she Ping-Ponged around the world as a teenage model. After getting into the biz at 12 years old, Smulders soon started working in New York, France, Japan and Germany during summers. “At first it was just a way to save up for college, and then I realized that you don’t really make any money as a model,” she says, laughing. “So I figured I’d just travel around the world for free. I just bounced around; it was a blast.” But then she found herself living in Milan at 19, dating a slimy Italian club promoter. “That’s when I was like, ‘This is not what I want to do with my life.’” So she hightailed it back to Vancouver to pursue acting.

Suddenly, our conversation is interrupted when the dapper Italian hairstylist saunters over to us, his brow furrowed. “Have we worked together before, darling?” he asks. “Maybe back in the day?” offers Smulders, referring to the countless hours she used to spend parked in hair and makeup in Milan. “Back in the day? You are 12 years old!” he shouts.

“I’m not. I’m 11,” she counters, crossing her arms like a stubborn kid before cackling “Whatever, ya’ll. I’m turning dirty 30 this year!” She hoots. “I’m debating going on a yoga retreat to Costa Rica. I don’t want to have a big party and get wasted. I’ve felt 30 for the past five years, but I’m excited because we have so much going on this year. I’m getting married!”

Considering her long engagement to Killam (over three years, plus a handful spent dating), I wonder if she’s feeling any jitters. But there are no bulging crazy eyes or excited squeals at the mention of the sprawling Northern California venue they have booked for their September date. “Man, we’re locked in,” she says with a laugh. “No changing our minds now! Every time you go to a wedding, you see the bride and groom for a second and then you feel like you have to be like, ‘OMG, you look beautiful!’ I’m not great at that kind of energy, so I just want to hang out and eat good food.”

And there’s the problem, from my perspective. On paper, Smulders sounds almost annoyingly laid-back— somehow flat. Maybe it’s because her brand of comedy doesn’t stem from an arid wit or snappy one-liners. Her humour is rooted in a crackling energy and openness that doesn’t really translate on paper. In fact, it seems almost impossible to convey an accurate impression of Smulders when her crooked smile—which brightens the room as unexpectedly as a flash of lightning—is stripped away, when her machine-gun laughter is notably absent and when the bold gestures are missing from her silly breed of pantomime humour.

Watching someone so seemingly elegant bounce around like a puppy that hasn’t grown into its paws knocks me off balance a bit—it’s as surprising as it would be to witness the Mona Lisa crack a filthy joke. So, I’m left banging my head against a wall, trying to perfectly describe the cocktail of charisma and goofiness that makes it, as Harris says, “impossible not to watch her,” when I suddenly realize: I don’t actually have to capture a metaphor for the awkwardly appealing mix. As Smulders’ star rises, you’ll have lots of opportunity to watch her yourself. Phew.