Maps To the Stars actress Sarah Gadon talks ghosts, Julianne Moore, and what scares her

This Canadian actress on why she actually enjoys being terrified—every now and then. 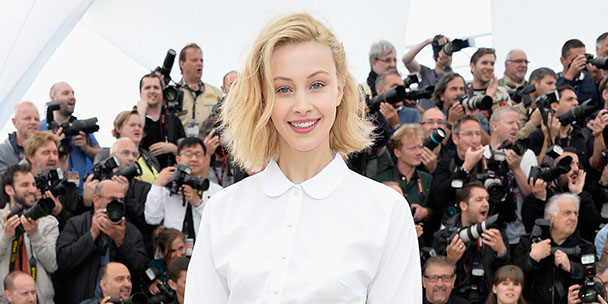 Canadian actress Sarah Gadon plays the ghost of a movie star tormenting her daughter (Julianne Moore) in David Cronenberg’s new film Maps to the Stars, out this Friday, October 31. In the film, which is a sharp look at the Hollywood mythos, also starring Robert Pattinson and Mia Wasikowska, Gadon spends most her screen time “being terrible” to Moore’s character. ELLE Canada sat down with the 27 year-old to talk about everything from the supernatural to the self-empowering, and are happy to report she is delightful and bubbly in real life…and not the least bit scary.

Do you believe in ghosts?

I do believe in ghosts! But I don’t think my character is a ghost. I think that my character comes from Julianne Moore’s subconscious. It’s a part of her psychosis.

Have you personally had any ghostly encounters?

This is going to make me sound so crazy! I like to say that I feel the presence of them. I get feelings – like when you walk into a space and just get a feeling. I think that there have been times where I’ve felt very close to people who have passed, in the present. I just did a film called Girls Night Out (out May 2015) where I played Princess Elizabeth and on V.E. night they’re out celebrating. My grandmother was in the Women’s Auxiliary Air Force and she was a huge film fan, and she was in Trafalgar Square on V.E. night. She’s since passed, but while making that film I felt her closeness to me.

You’ve said of your Maps to the Stars character that you kind of see her as a critique of women in Hollywood. Could you expand on that a bit?

I think she represents the idea of the female actress as an icon. If if you look at the great Hollywood icons of that era—Marilyn Monroe or Jean Seberg—they were these really beautiful women whose images live on and are referenced constantly in film and fashion culture. But they were very different from the image they presented to the world: They were very troubled women going through really difficult things. When you look at my character and how dark and vile she is underneath the exterior of her beauty you realize that an image is a very cultivated idea of perception and it doesn’t even really associate with the person whose image that you’ve cultivated.

Have you yourself found sometimes in your career, the way people perceive you is really different from who you really are?

Yeah, definitely. I think that especially when you do shoots for magazines and stuff like that, stylists and a team of people come in and project you into an idea of you, and it doesn’t actually always equate to you as a person. That’s something I’ve really had to try and understand and navigate and become more vocal about. You realize that it doesn’t matter what they think because ultimately what will be the end goal or product is a picture of you and your words beside that picture and if there’s a discrepancy in between those two things then you’ll always feel kind of frustrated by that.

What are some thing you’ve said to yourself “I’ll never do that”?

I think actually it’s been the opposite. When I was younger I would say, “oh I don’t want to try this or I don’t want to do that”. I’m realizing as I continue to work more, as I continue to meet more people and work with different kinds of people that the best people I’ve ever worked with are the most open, and people that are willing to take suggestions and are willing to collaborate. It’s become my motto now to stay open.

What opportunity would it terrify you the most to be “open” to?

One of the things I was really terrified about was playing Elizabeth in Girls Night Out. I thought “Why am I going to take on this icon? This is going to be really scary because everyone is going to be very judgmental, and doing a biopic is always controversial.” But I was so in love with the story, and the film, the era, and everything about it that I just decided to take that leap. I don’t know if it’s going to work out but I hope it does!