Man Up: Charlie Hunnam is ready for his next chapter

The Sons of Anarchy actor on what it means to be a man today. 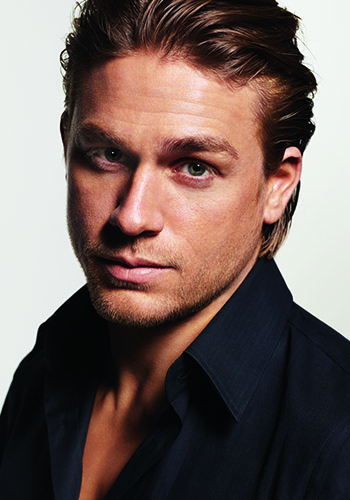 Though he’s more than 6,000 kilometres away, when Charlie Hunnam calls from his hotel room in Milan after Calvin Klein’s fall/winter 2015 men’s show, it feels like we’re slinging beers at a bar around the corner. Already boasting an impressive resumé and praise-worthy performances on the big and small screens (Sons of Anarchy, Pacific Rim and Queer as Folk), the Newcastle, U.K., native chats with ELLE Man about throwing scissors, character deaths and getting in fighting shape.

What’s it like to go from playing Sons of Anarchy’s Jax Teller to your latest role as King Arthur? That’s a pretty intense character transformation.
“It was important for me to have a little bit of time to try to find some sort of centre before I jumped into a different character. It was actually really painful to say goodbye to Jax. I immediately stopped riding my motorbike. I know I’ll start riding again at some point, but I needed to get away from it all, just so I could find myself again.”

So you had to create some space between you and Jax in order to grieve?
“Having to say goodbye to that character was really heartbreaking for me. I have lost friends and family members before, and that feeling of bereavement—although this wasn’t as intense—it was that same feeling. I held it in my heart for about a month after filming ended. I said a lot of silent goodbyes to Jax, but ultimately there was no room left for him in my life, so I had to let him go.”

Masculinity is a significant theme in Sons of Anarchy. What do you think it means to be a man today?
“It means standing on your own two feet, living by your code of honour and being a rock for the people around you. But in the modern context, it also means being in touch with your feminine side. Men have to be strong enough not to repress their emotions; real strength allows for vulnerability.”

What’s the most rebellious thing you have ever done in your life? (Or at least what you’ll admit to publicly.)
“When I was 15, I was banned from going to Florence on an art-history trip by a teacher who generally thought I was a ‘menace to society.’ While he was away, I broke into his stash of acrylic paints and painted this giant crushed-up Coke can. It was maybe the best painting I’d ever done, but he ripped it up in front of the whole class. I was so angry and humiliated and sad that this thing that I loved and that I’d created was destroyed. I felt myself starting to cry, which was totally un­acceptable to me at that time. We used to twist old art scissors into throwing stars, and I could hit a fucking bull’s eye, no problem. So I threw some of these scissors at him, and they landed in the doorframe parallel to his head. And that was it—they expelled me from school.”

Some people might say that doing onscreen nudity takes a certain rebellious attitude. And judging from your CV, you’ve certainly become comfortable with showing some skin onscreen—your current shirtless CK Reveal campaign included.
“The level of nudity that I do now, which is taking my shirt off, doesn’t bother me at all. But I have done full frontal before. I did full frontal when I was 18 on the TV show Queer as Folk. But because I was playing a 15-year-old character, the censorship people wouldn’t allow us to put it on TV.”

Would you be willing to do that now, almost 20 years later?
“I think when I was young, I was a little bit more fearless with that stuff. I don’t know…I’m sure I would; I have nothing to hide.”

Do you switch up your training routine when you’re getting physically ready for a role?
“I tend to do whatever I think is appropriate for the character. You’re playing the character, so go do what that character does—it’s going to bring you closer to him. For Arthur, he’s a great fighter, so I’m going to be fighting in the gym. And when I’m between jobs, I need to work out a lot for my sanity. If I weren’t an actor, I’d be the fittest motherfucker on the block.”

READ MORE:
Chris Pine doesn’t think he’s a hipster (He totally is).
What every man needs in his grooming kit
The sexiest fragrances for guys and girls