Anything can happen in Toronto during TIFF. 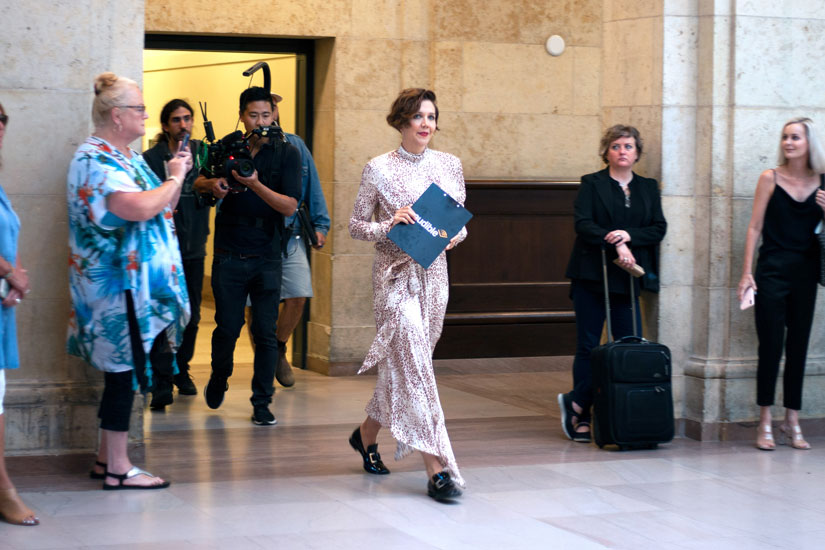 Commuters at Toronto’s Union Station were surprised to see Maggie Gyllenhaal on Wednesday as she read excerpts from Tolstoy’s Anna Karenina. The unannounced performances were planned by Amazon’s audiobook arm Audible, where recordings of Gyllenhaal reading Mayhem by Sigrid Rausing and The Bell Jar by Sylvia Plath, in addition to Anna Karenina, are currently available.

“It reminded me how much I love this book,” Gyllenhaal told us of doing the performances. “As an actress, I loved reading it. It’s like doing a scene where you play both Anna and Kitty, both Kitty and Levin – and Tolstoy is amazing because he gives every character respect. To be able to play both characters in a scene, I mean, you never get to do that as an actress.”

The Deuce actress is a fan of the audio format for its ability to immerse the listener in the world of the book. “About a year ago I listened to Juliet Stevenson read A Room of One’s Own. I had read the book in college and it made a big impression on me. But hearing it in my ears, it started to be in everything I was thinking about.”

“The thing about audiobooks is if you have a good reader, it’s like taking a class,” she adds. “They’re going to put some analysis into it in the way that they read.”

It’s a busy week for The Deuce actress. “The Toronto Film Festival always happens right when school starts,” says Gyllenhaal, who does not have any films at TIFF this year, but attended the party for her husband Peter Sarsgaard’s film Human Capital.

The final season of The Deuce, HBO’s acclaimed show about the sex-trade industry in New York City in the ’70s, also airs this week. “It is by far the best season, I’m thrilled with it,” she says. “It’s my strongest work so far in my life. I loved playing Candy and I miss her already, she’s such an incredible woman.”