Mad Men actress Jessica Paré opens up about her family, Montreal roots, and the joys of playing Mrs. Draper. 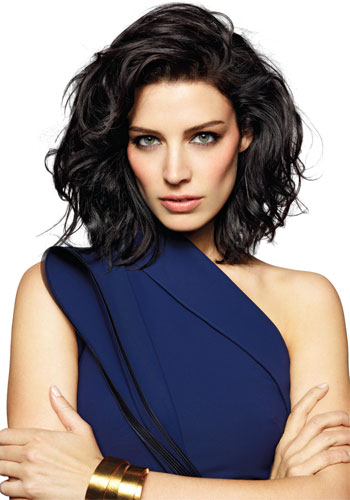 She is leaning against a loveseat in the Four Seasons Hotel Toronto, her body curved like a question mark. We’re waiting as the photographer tinkers with equipment for the
cover shoot.

A group of women, wrapped in
sensible winter coats and scarves, bustle out of the restaurant like penguins. As they pass by, one of them murmurs, "Oh, they’re trying to make that pretty girl look like
Mad Men."

Paré doesn’t hear them. She’s too busy cracking another joke, her laughter as tunefully surprising as acid jazz. You can’t blame the lady penguins for assuming that Paré couldn’t be, well, Paré. The Montreal native seems too warm, too natural, too human to be a boldface-named Hollywood actress.

But after playing Megan Draper – the Québécois babe who tamed legendary Don Draper on AMC’s Mad Men – that’s exactly what she is. Paré moved to Hollywood eight years ago after scoring film-festival raves with Canadian indies like Stardom and Lost and Delirious.

She got some good roles (she’s the sudsy topless girl in Hot Tub Time Machine) but basically was "a girl used to not having work" – until Matthew Weiner cast her on Mad Men as the charming gap-toothed secretary with sizzling charisma.

When she sang "Zou Bisou Bisou" to Jon Hamm last season, a glittering and intense television moment, her stardom crystallized like honey. Now, after pulling on a woollen sweater and black skinnies, she’s sipping a glass of Pinot Grigio and talking about learning to play the ukulele. And with the sixth season of the show premiering this month, we’re learning that Paré is as magnetic as her character.

There’s nothing more unpredictable than being Don Draper’s love interest.
"I didn’t know what I was auditioning for, but the character description was ‘brunette female.’ I was like, ‘Check and check!’ I had no idea what the part would turn into.

The first time Megan and Don kissed, the costumer turned to me and was like, ‘Well, it was great working with you, buddy.’ And then it turned into being Mrs. Draper, which I still can’t fucking believe. I’m so grateful."

A lot of people hate Megan’s character. They didn’t want Don to marry.
"How can you not love Megan? I do. People will react to me as an actor, though. Everybody has their opinions – I’m the worst about, like, ‘Oh, I don’t like that actress’ for no reason. So I understand that, but I think the character is fantastic. She’s so spontaneous and genuine."

Can you relate to that?
"I think I have a bit of a darker edge than she does, although it may not be the first thing people think about me because I am outgoing and I like to joke. That used to be how I judged the quality of my auditions."

If you could make them laugh?
"Yeah, I’d think ‘Well, my performance was terrible, but I made them laugh three times.’"

[Laughs] "But I’m more sardonic than Megan. As
an artist in general, you’re better for having access to a darker side. When I’m working, I feel like I can actually be a bit of a maniac – laughing one second and crying the next. It helps to be that mercurial as an actor."

Is that exhausting?
"Definitely. It’s wonderful, and it’s a good kind of exhaustion, but it can be like an open wound all day."

So you just moved into a place in L.A. last week and bought a place in Palm Springs. Are you settled in Cali now?
"I love Los Angeles. I know it gets a bad rap, but it’s so multicultural. Sometimes we get caught up in the idea that it’s only about film or TV, but there’s amazing food and great music. I mean, any night of the week there’s some incredible band playing at some little bar."

Based on how you were curating the playlist during today’s shoot, I can tell you’re into music.
"I am. I gravitate toward rock. Most of my personal collection is sort of ’70s pre-punk – New York Dolls and Iggy Pop and Lou Reed. And I did a couple of dates with the Jesus and Mary Chain in the summer, which was so incredible."

What was it like performing with a Scottish altrock band?
"I’d be really anxious offstage, and then once I’d step on, I was just like, ‘You’re here, so don’t disappoint all these people. They got a babysitter, they went out for dinner, they took a cab, they bought tickets, this is their favourite band, so don’t fuck up the song.’" [Laughs]

No pressure! We need to talk about your performance of "Zou Bisou Bisou." Fans lost their minds. It was a huge hit on iTunes and was recorded on vinyl.
"I know! I knew the song was catchy when I started working on that episode and everybody in the production office was singing it incessantly, and then I was singing it for about six weeks and then everybody in the cast was singing it for the next two. Hats off to Matt Weiner for choosing something that would capture people’s imaginations in such a great way."

Hats off to you for performing it. It’s going to be one of those TV moments that people really remember.
"If I’m lucky!"

I know you’re into literature. What are you reading now?
"The Sisters Brothers by Patrick deWitt. He’s a Canadian author. It’s a western! The other book I’ve started, but didn’t bring with me on this trip because it’s too thick, is Freedom by Jonathan Franzen. I loved The Corrections. It was gruelling, but it was worth it. I just love his writing. I love how everything between the lines is so tense."

It’s the same with Mad Men. There’s that never-ending tension.

"So much of the important stuff is unsaid. And it’s really very difficult to do. It’s also respectful to your audience to assume that they get it rather than spelling it out for them."

Do you talk through everything to make sure it gets resolved or do you feel comfortable between the lines?
"I’m discovering as I get older that that doesn’t always need to happen, and it’s okay. Sometimes you move forward just by moving forward."

You’ve said a few times today that your peace of mind came with age.
"Most of my good girlfriends are older, so I had only high hopes about turning 30 – and so far I haven’t been disappointed.

I feel like I have more fun; I’m able to let go of the things that don’t matter so much. I’m not saying ‘Congratulations! At 31, I’m a fully formed human being!’ Hopefully I’ll keep improving." [Laughs]

Have you learned a lot from your parents?
"I’ve always been really close with all of them: my dad, mother and stepmother.

I love my mom’s spontaneity and her joie de vivre, my dad’s analytical wit, and my stepmother is really reflective.

Between my stepmother and my mom, I’ve learned from two very different personalities. In terms of my organization now, I can either go full hoarder or full purger."

Have you started hoarding in your new house?
"No! Even my therapist is like, ‘Keep that!’ with, say, a production hat from Jack & Bobby, which I did in 2004. I don’t think I need it, but he says those are things I may want at some point. So I just have a box marked ‘history’ and it all goes in there."

What happens when the box is full?
"I don’t know! [Laughs] Don’t stress me out about it!"

Are you happy to be settled?
"I’m very lucky to be able to travel a lot, but sometimes I start to get a little squirrelly when I’m not in my home. I was just shooting an independent film, Standby, in Dublin – or downtown Ireland, as I like to call it. We were outside at night with people barfing on our shoes between takes. [Laughs] That thing that you hear about the Irish drinking…."

It’s so true. Did you go out in Dublin?
"Unfortunately, I did get a few chances, so I didn’t really see the city during the day." [Laughs]

Learn about Jessica’s other artistic talents on the next page…

Do you miss Montreal?

"I do, but not in the winter. I remember when my brother was little, he heard that Quebec wanted to separate and thought it was a great idea because then we could float down next to Florida."

That’s genius.
"But, really, I have some of the greatest friends there. I like that it’s a very tight-knit community of artists. A lot of my good girlfriends there are actors or clowns."

That’s amazing.
"We are talking about Quebec."

Were you ever tempted to be a clown?
"No, but I got some really good miming lessons from my dad. He studied at the National Theatre School. One day, we were sitting in the kitchen reading the paper and he was like, ‘Oh, my mime teacher is retiring.’ My younger brother Oliver and I wondered what it looked like.

[At this point, Paré jumps up and launches into a lengthy demonstration of mime fishing, golfing, canoeing, pulling an invisible rope and – the classic – getting trapped in an invisible box. She’s a bit breathless, but she’s clearly a pro.] Just me and my brother having a mime-off, thanks to a guy who’s now retired."

You can’t be a mime teacher forever, I guess.
"You just get to the end of that rope." [Laughs]

I hear you’re crafty.
"I taught myself to crochet on a Saturday night like a wild woman. I had, like, a bag of candy and a bottle of wine."

By yourself, party animal?
[Laughs] "No, my cat was there…and there was figure skating on TV."

That is the girliest night of all time.
"I just like making stuff. I worked really hard to get into the fine-arts program at Dawson College in Montreal and then quit after a couple of weeks because I’d had it with school. Obviously, given the position I’m in now, I feel like it was the right decision. But there were a lot of times, when I was couch-surfing at my friends place back into my parents’ basement in Montreal, that I thought maybe fine arts was a better career."

What do you paint?
"Portraits, mostly. I’m hoping my place in Palm Springs might lend itself to that."

What a romantic idea: "Come sit for me in Palm Springs and I’ll paint you."
"I’ll feed you grapes and white wine. [Laughs] But, really, one time, I was between jobs and decided to make my family Christmas gifts. I made my father and my brother these felt slippers, but I couldn’t measure their feet so I had to sort of imagine.

They were enormous. The two of them opened the boxes and dissolved into giggles. They were total flippers. And even when they talk about it now, my dad is, like, snorting, crying and giggling."

You seem comfortable with your mistakes. Are you that confident?
"That’s an interesting question. I definitely feel like I’m becoming more confident. I feel great about where I am. And I like who I am.