The Canadian chameleon has a new direction this time round. 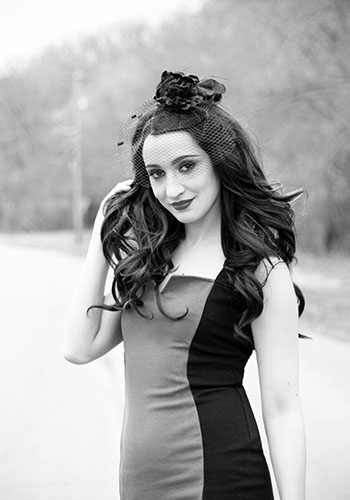 How does the child of Irish and Mexican immigrants from Pickering, Ont., end up as one of the alternative scene’s darlings? Blame it on her mother.
“My mom had a record collection with everything from Leonard Cohen to Willie Nelson,” says Lindi Ortega, while on a flying visit to Toronto (via Nashville) before heading out to play at a biker festival in California. “That’s when the seed was planted. And then when I started singing, I found that my voice was suited to those sort of plaintive Hank Williams-type songs.”
So why, after two critically acclaimed rockabilly(ish) records, is the 35-year-old releasing a soul album? Well, that’s Dirty Dancing’s fault. “I first discovered [blues legend] Solomon Burke when I heard ‘Cry to Me’ on the soundtrack. I was like ‘Who is this voice?’” says Ortega, laughing. That led to a deep-dive into all things Otis Redding, Etta James, Ray Charles and then eventually to Faded Gloryville (out August 7).

“Soul lyrics are a lot more literal and not as esoteric or metaphorical as country songs can be. I used to put that pressure on myself to be really poetic and profound. It’s nice to just say it straight up; there’s a freedom in that.”

This isn’t the first time the artist has done a bit of genre pivot: In her 20s, Ortega did time on the Toronto indie scene, self-releasing two singer-songerwriter-type albums before taking her sound in a more country/roots direction after a move to Nashville a few years ago. Ortega is open about the struggles she faces as a not-huge-but-not-a-busker mid-level musician and actually named the album after a metaphorical place she had to visit in her career:

“You get a bit older, you’re working your butt off, and you start questioning can I still do this? And that’s the faded glory in realizing your life might not actually look like your romaticized idea. A lot of people go there. I came to think of it as a place that people visit.”

Ortega’s own stay in Faded Gloryville was prompted after seeing the movie Crazy Heart, specifically the scene where a one-time country star (played by Jeff Bridges) is vomiting out the back door of the bowling alley he’s reduced to play.

“I looked at that and thought ‘Is that going to be me?’ It was a legitimate question to ask myself. It’s not a nice question, but it’s an honest question.”

Luckily (for her, for us, for good music in general), Ortega managed to move on from that place of honest reassessment, spurred by her love of the music that got her there in the first place:

“I played in Denver, and this girl came up to me after the show,” says Ortega. “She gave me this huge hug and said she’d been struggling with addiction, and listening to my music inspired her to pick up a guitar and get clean.” She adds that realizing the impact her hard work has on others is what keeps her going. “I like to think you have to go through Faded Gloryville to get to Paradise.”