Fashion's favourite chameleon is enjoying her comeback, but motherhood is what defines her now. 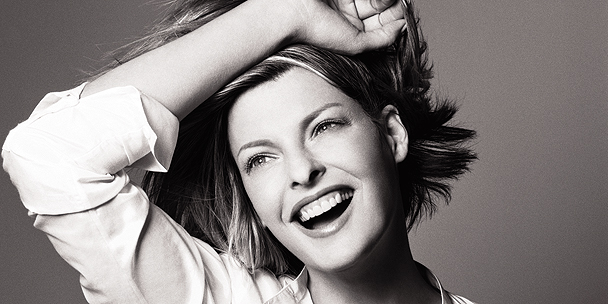 Linda Evangelista quietly enters the photo studio at New York’s famous Pier 59. Dressed simply, with her hair casually pulled back, she doesn’t immediately look like the mythical creature that ruled the modelling world during the late ’80s and ’90s. As she makes her way over to the makeup chair, the sounds of Arcade Fire playing in the background suddenly catch her attention. "Oh, they’re Canadian like me," she says. "I love them!" Evangelista settles into the chair, and makeup artist James Kaliardos and hairstylist Serge Normant begin to transform her from supermom — she has brought along her baby boy, Augustin — to supermodel.

Her comeback
It’s been almost 20 years since Evangelista, Naomi Campbell and Christy Turlington were billed as "The Trinity" of top models, yet even today, this 42-year-old continues to land lucrative endorsements — including her recent appointment as the new international spokesperson for L’Oréal Paris.

At today’s shoot, Normant — like Meisel — struggles to find words to de scribe Evangelista’s measured smiles and catlike movements on-set. "She’s just… wow!" he says. "She is conscious of everything," adds Kaliardos. "She grasps everything." While other women — whether it’s Gisele Bündchen, Kate Moss or Natalia Vodianova — have become equally famous and powerful, Evangelista remains the iconic fashion model. Even as a young girl, she knew this was her destiny. When she was a teenager, she insisted that her mother enroll her in modelling school. At 16, she entered the Miss Teen Niagara pageant but lost. Although a talent scout from Elite Model Management noticed her at the pageant, her strict parents forbade her from getting in touch with the agent until she graduated from school. "Looking back, I think it was a wise decision," she explains. "The whole debate around anorexic models is based on the fact that girls are often quite young when they start."

The beginning of her career

Evangelista moved to New York when she was 19, but her success wasn’t immediate. It wasn’t until three years later that she landed her first big shoot with French
Vogue in 1987. Then came the famous haircut that launched her career into overdrive. At photographer Peter Lindbergh’s suggestion, Evangelista agreed to let hairstylist Julien D’Ys give her a chic, androgynous bob. "I thought I was finished when they cut my hair," she told a British newspaper. "Eighteen out of 20 clients dropped my bookings. I rang Steven Meisel in tears. Within two months, I made the grand slam: covers of American
Vogue, Italian
Vogue, British
Vogue and French
Vogue."

Almost a decade later, Evangelista disappeared from the jet-set scene after a particularly unflattering appearance on the runways in Portugal. She set off for Saint-Tropez, where she lived in seclusion, reportedly packing on some pounds and letting her famous good looks slide. Her personal life was also in turmoil: she split from her fiancé, actor Kyle MacLachlan, and embarked on what was described as a "rocky romance" with French World Cup soccer star Fabien Barthez. Then, in 2001, she relaunched her career with a 28-page spread in Vogue. When asked to explain her absence, she told the interviewer that the miscarriage she suffered six months into her pregnancy (with Barthez) was devastating. "It was the hardest thing I ever had to go through," she says. "I’m not over it, and I never will be."

What keeps her looking gorgeous

Since her return to modelling, Evangelista has been signing numerous modelling contracts — including her new deal with L’Oréal Paris — and working the international runways. "It’s so fabulous to be working for such an important brand — especially because it’s one that is accessible to all women," she explains.

Described as a natural beauty, Evangelista admits that she works hard at staying healthy and keeping in shape. "I know it sounds a bit clichéd, but I stick to drinking two litres of water each day and I don’t drink alcohol or smoke," she says. "I also wear sunscreen every day — even in winter. I do yoga and work out a little on a Power Plate machine that I have at home. I also walk wherever — and whenever — I can."

The other reason she’s glowing is evident when she breaks into a smile at the mention of her young son, who was born last October. "I finally feel complete," she says when asked how he has changed her life. "I’ve never been away from him for more than three hours — I can’t bear it! I know that being so attached is probably not the best thing, but that’s just the way it is. My priorities have changed: he comes first. The first person he sees when he wakes up is me. From now on, my life is Augustin. I feel blessed. Today, I have everything I could have ever dreamed of!"