...plus nine more things you need to know about the Rules Don't Apply star. 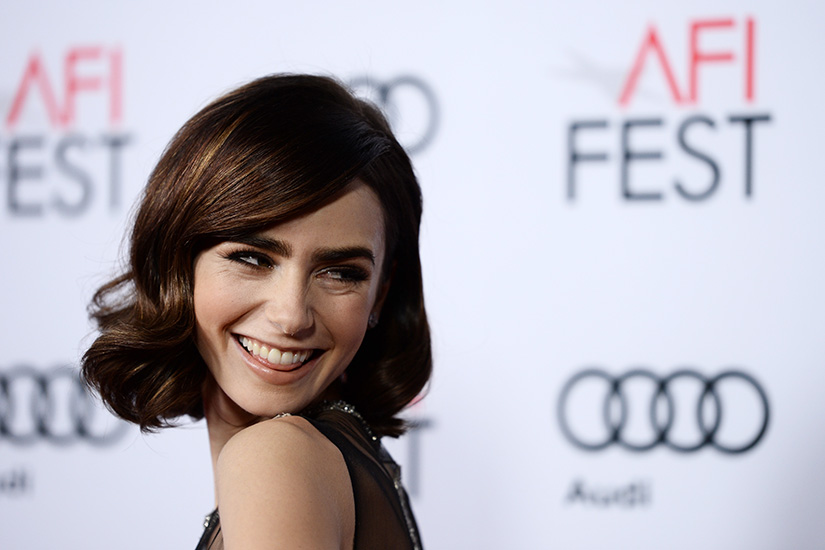 What did we learn about Lily Collins when she visited Toronto recently, in town to promote her new Warren Beatty-directed flick? Other than that we should probably get a camel coat ASAP because she looked ridiculously chic in hers? Well….

1. Her eyebrows are distractingly good

Let’s just get this out of the way: Spend 30 seconds in the presence of arches like those and you’ll never go near your Tweezers again.

2. She loves the deep questions

“I’ve got to say – the amount of really intellectual and really thoughtful questions that I’ve been asked [about her new movie, Rules Don’t Apply] is really enjoyable, because this movie [about a forbidden love in Howard Hughes era Hollywood] is really of that caliber. It is something that makes you think.”

3. She does her best work when she’s half-delirious with exhaustion

“”We were doing like, 25, takes of one scene, and in the moment it’s like, ‘Why am I doing this, I’m really tired, I think we’ve got it like 10 ago’. And then you go home and you go to bed and you wake up and you think, ‘Wow we actually got to a place I never would’ve thought last night because it wasn’t written that way and because we hadn’t reached delirium yet’.”

4. She totally relates to her character in this film, a wannabe starlet named Marla

“I was very much like Marla, wide-eyed, innocent coming into the industry feeling like I knew in my heart this is what I wanted to do and being passionate and strong willed about it. At that age you think know what you’re doing, but you really don’t.” [Ed’s note: Collins is now 27]

5. Her character taught her a lot about dealing with rejection

“You’ve got to be open to being told ‘no’. You’ve got to be open to feeling the insecurities that you feel and letting yourself feel them. A lot of the time nowadays, we cover it up and say everything’s fine and put a mask on. If you don’t deal with those problems, you’re not opening yourself up to some of the emotions that you then need to use in other scenes or movies or in character building. And so for me, seeing my character go through that and really embracing the insecurity she felt, it was like wow, that’s such a really important thing as an actor and as a human being.”

6. In fact, she’s actually written a book about that

“It just got announced! It’s about embracing your insecurities and how difficult it is and how we all go through the same thing growing up as young women. We don’t know it until we talk about it. The second you talk about it and realize you’re not alone, you’re like, ‘Omg. I’m not crazy, you too? Wow’. But I mean, it takes ages and we’re all still working on it. But I think as long as you have an intention set to do that, even subconsciously, you start to kind of be able to do that. It’s not overnight.”

7. The book was actually inspired by her over 4 million Instagram followers

“All these young girls that I was interacting with were telling me all these amazing stories about their insecurities and experiences and their pictures were next to their words. They were being so brave and open with me. I thought, ‘My God, if they’re being brave and they don’t think I can related to them, I can be brave and I can prove to them that I can relate to them and I can join in on that conversation’. They’ve been so supportive and encouraging and inspiring to me that I feel like this community’s been created that I never knew was out there for me at least. Because of them I wrote this book. So I’m very lucky and fortunate to have that support.”

8. In unrelated news, she’s also all about breaking dating rules

“There are a lot of dating rules that I don’t understand. Like, ‘he texted you so you’ve got to wait an hour because it looks like you’re too needy’, or ‘don’t tell him you had a good time because make him guess and wonder. Don’t say you like his shoes’. There are so many like self-imposed dating rules that I just…if you like the person, tell him. If you had a good time, tell them. If you want to text them back, text them. If you like his shoes, tell him! And it’s funny because the second you do that, I’ve had situations where I’ve talked about it with the guy, and the guy is like, ‘I think the same thing! I think it’s stupid’  I think we’re kind of getting there, but it’s so hard now with all this technology. ‘He texted me this in capitals!’. Omg, just pick up a phone and tell him you like his shoes!”