Poised and ambitious, Lily Collins is the new reigning queen of Hollywood. 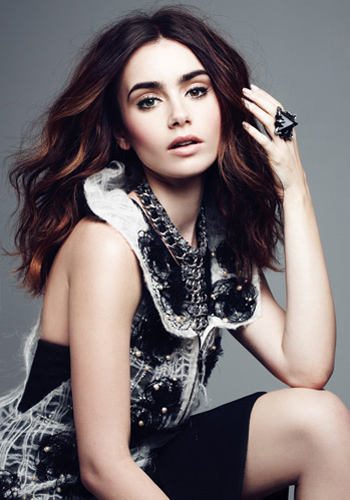 I’m wondering if Lily Collins is as smart as she seems. At 24 years old, the actress, model and daughter of legendary rocker Phil Collins has written for the Los Angeles Times, covering a presidential election. She’s sitting now on a velvet couch in a New York studio, talking, with perfect poise and staccato diction, about her role as the cunning heroine in the summer blockbuster The Mortal Instruments: City of Bones. Giving into a base impulse, I ask her if she’s game to try solving a few riddles (brainteasers that, granted, were told to me by an eight-year-old but I’d not managed to solve on the first go). Collins looks at me like she’s being Punk’d, but she rolls her head from side to side like a sprinter at the beginning of a race and then nods as if to say “Bring it on.” I launch into a riddle about a hallway with three doors, and she stops me with a serious look to summarize the important points. Then she gets the answer straight away. “Oh, my God, that’s great!” she says, clapping her hands over her face. I ask another simple one: “What gets wetter the more it dries?” She’s into this now. “A towel,” she fires back right away. “Is that right? I’ve never heard that one!” We go on like this: me lobbing out silly riddles and her smashing them back until she’s practically wiggling with glee. “You don’t understand—I never get these right,” she says with a laugh. “I don’t know why my critical thinking is on a high right now!”

It’s probably because Collins is a little on edge during interviews—even now, as she shares a laugh and sips on the last of her latte. “I’m just alert—I’m aware,” she explains. “I witnessed a lot through the process of growing up in the industry. I grew up knowing the fine line between keeping things public and private. And that’s a cool thing—to be able to avoid mess-ups early on.”

Born in England to Phil Collins and his second wife, Jill Tavelman, Collins spent her first birthday being serenaded onstage at one of her father’s concerts. “I don’t remember that much, but I don’t think I ever fully understood the gravity of it. But now, it’s quite funny to watch videos,” she explains, tucking her slender limbs up under her. “My parents really instilled this respect for the arts in me. I’ve always wanted to be grateful and not get jaded, because it can be so easy. I want to keep being surprised by what I get to do.”

Read more about Lily Collins on the next page…

Her opportunities are reverie for most: She has hung out with Mario Testino; she sat down to lunch with Christian Louboutin because she was doing a school assignment about fashion; she was chosen by Karl Lagerfeld to wear Chanel to a debutante ball in Paris, which was featured on the early reality show The Hills. But her Hollywood story has been very different from those of the other girls she’d see at the annual Teen Vogue Young Hollywood Party—girls like Mischa Barton and Lindsay Lohan. When she was five years old, Collins and her mom moved to Los Angeles because her parents divorced. As a teen, she wasn’t happy to just hang with her friends at the mall. She wrote a column for the Brit edition of ELLE Girl, tried to get a talk show green-lit and led counselling sessions for teens while in high school. She went on to major in journalism at the University of Southern California. “I’ve always loved being a part of storytelling,” she says, her elfin features lighting up. “When I was a kid, I loved reading books and disappearing into my head—to take someone else on that journey is what I’ve always wanted to do.” That’s what led her to go for roles alongside Sandra Bullock in The Blind Side and Julia Roberts in Mirror Mirror.

It’s also why she’s so excited about her latest role in The Mortal Instruments: City of Bones, which is based on the bestselling young-adult book series. Collins is talking about the plot points, carefully explaining her character’s special powers (ironically, her character is half human and half angel) for fighting evil. Her soft voice takes on an almost professorial tone—until she talks about training for the part, which involved three months of gruelling workouts to hone her endurance and balance for fight scenes. “It’s one thing to do it in spandex workout gear,” she says, laughing, “but it’s another thing to do it in an extremely short bandage dress with thigh-highs and six-inch heels.”

That’s a far cry from the frame-filling ball gowns that Collins wore as Snow White in Mirror Mirror. In fact, she has the delicacy of a sparrow so it’s hard to picture her wearing spike heels and cracking heads. “I think I’ve grown up; I’m definitely kind of exploring that darker, edgier side,” she says with a smile before quickly adding a disclaimer: “Never overtly sexy, though—that’s just not who I am.”

Lily Collins shares her experience with Hollywood on the next page…

When I bring up the comparisons that have been made between
The Mortal Instruments: City of Bones and
Twilight (you know, fantasy, love triangles, wispy young lead with long, whipping hair), Collins is polite but firmly pokes holes in every one. “It deals with sexuality, family issues, with a girl trying to find herself and grow up,” she explains. “It deals with a lot of issues that I don’t think young-adult novels have dealt with before. I think she’s an amazing literary heroine for this new generation. I don’t feel that she is this girl that allows herself to sit back and bask in the men in her journey. She is never a victim.
She figures out what to do.”

Stars of the zodiac: Our favourite CELEBS AND THEIR SIGNS

I can see similarities between Collins and Clary, her character in The Mortal Instruments: City of Bones. In the film, Clary fights to save her mother, who has been abducted. So, aside from being quick-witted, they’re both “like best friends” with their moms (perhaps, in Collins’ case, because she had a reportedly distant relationship with her father growing up). At times, I think I hear a touch of sadness in her voice. “My family has always been really spread out,” she says. “I’d like to have get-togethers and things at the house—I’m looking forward to that, being a mom one day.” She smiles. “Now that I’m baking and cooking, I can’t wait to share it with kids.” She’s laughing now, describing the excellence of her quinoa chocolate chip cookies and vegan, gluten-free spice cake. “I really can’t wait. I want a big family.” Enough to plough through all her baking? “Yes, exactly! To have family dinners and big holiday gatherings.”

But for now, Collins is happy living on her own “like, a block away” from her mother in L.A. She redecorated her apartment, which belonged to her grandmother, in a style she carefully describes as “organic, industrial Zen.” She had old farm tools shipped over from England to use as table bases and painted the walls teal. “It’s soft and hard,” she explains. Then she steals the words from my mouth. “It kind of describes me,” she says. “I like to be hard and edgy at times but then very soft. I put a lot of thought into it.” Like everything, it seems.

Then I find myself thinking about Hollywood royalty—about the children of rock stars and Academy Award winners who live like modern monarchy, gifted with golden opportunities. Earlier, I’d watched Collins stand coyly before the camera for our shoot, wearing a glittering Erickson Beamon crown. She was laughing, casually pushing the coronet back up on her head, when I saw a flash of the tattoo she had just got on the inside of her creamy wrist: a crown.