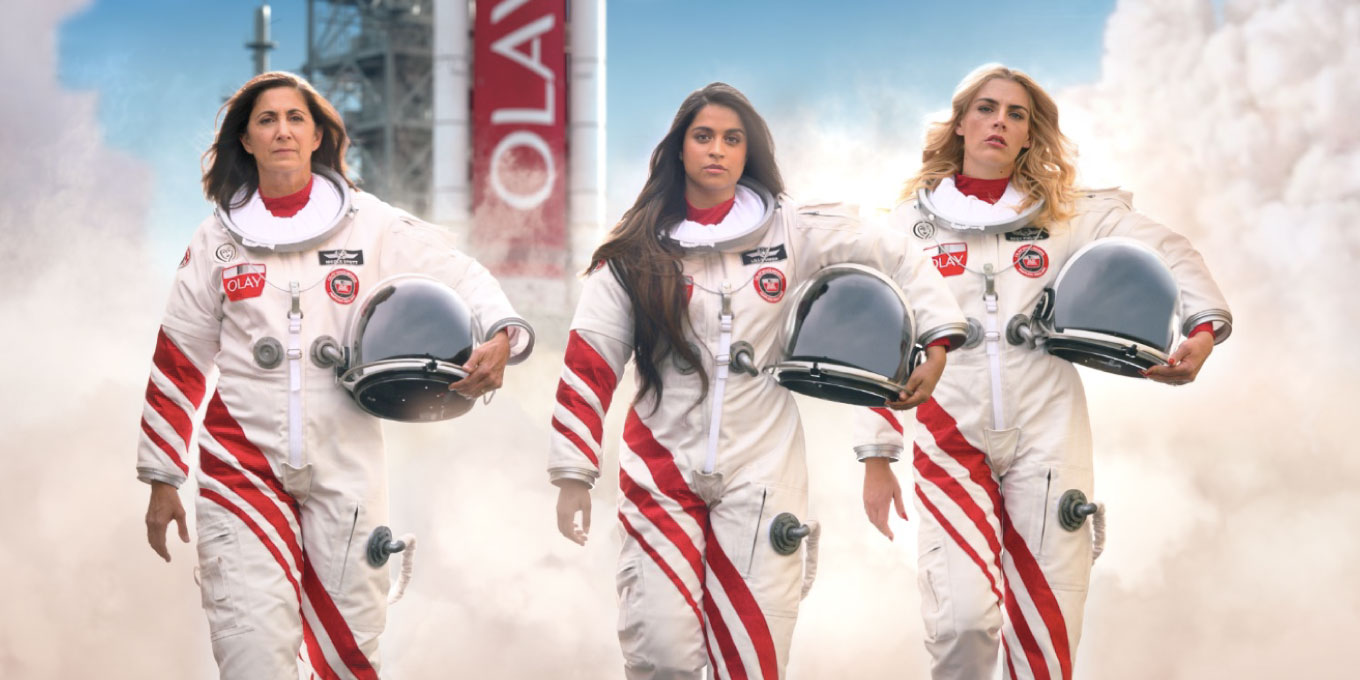 Lilly Singh has a bone to pick with Los Angeles. “Honestly, I think the winter in L.A. is still too cold,” the Canadian YouTuber-cum-late-night host tells us when we reach her by phone in California. “I’ve been scammed. I moved here with the expectation of tropical weather 24/7, and that is a lie.”

Something that’s not a lie: This weekend, Singh is set to star in her first Super Bowl commercial for Olay. Inspired by last year’s all-women spacewalk, the ad finds Singh and actor/former late-night host/prolific Instagram Story user Busy Philipps travelling into space alongside retired astronaut Nicole Stott. Taraji P. Henson and Katie Couric also appear in the ad. The goal, as they say in the commercial, is to #MakeSpaceForWomen in male-dominated fields by paying homage to the women trailblazers in STEM industries.

We caught up with Singh to talk about starring in a Super Bowl commercial and achieving her goals.

One of your most recent YouTube videos was about vision boarding. Was starring in a Super Bowl ad ever on your vision board?

My life has surpassed my vision in a lot of ways. I don’t think young Lilly could have ever dreamed this up. This is better than what I thought I could do, so it wasn’t on my vision board. That being said, it’s a massive honour and such a cool moment. I’m really excited about it.

What goes through your head when you realize you are achieving things you never thought would be possible?

It’s a little surreal, to be honest. I’ve had a few moments where I’ve been like, “What is happening? I don’t understand. My brain cannot compute.” But when I actually get to process it…I feel gratitude. I was just a girl in her room making YouTube videos for the four people who watched them. It turned into this amazing journey where I get to do cool things and give back.

Has exceeding your own expectations inspired you to dream bigger?

Absolutely. If you look at my most recent vision board…young Lilly would be like, “Okay, calm down.” One of my older vision boards had pictures of being on people’s talk shows, like on Ellen or [Jimmy] Fallon’s show. Never in a million years did I imagine I’d have my own show. I’ve learned to aim really high and work really hard and be nice to people. That can get you really far. On my current vision board, I’ve got an Oscar, a Grammy. As I was taping them down, I was like, “Yeah, okay.” But that’s what I said before.

How did you react to finding out you were going to star in a Super Bowl commercial?

I’ve worked with Olay for a really long time. I love them and everything about this campaign. When they came to me with the idea, I was excited. But it was also really important to me that the commercial was bigger than me, bigger than Olay and that it had a purpose. And that’s exactly what the campaign is about because we’re recognizing that there is a lot of gender disparity in a lot of industries and that we need to make space for women.

What was it like filming the ad? It looks really fun.

One of the hardest parts of filming was acting like I wasn’t freaking out. I walked on set and, of course, there’s a spaceship and I’m like, “Oh my god, this is so cool,” while everyone else was super chill. We wore those really dope spacesuits. For one part, I was actually elevated in the air, which I’ve never done before, so that was really cool. And I was surrounded by this all-female cast and women behind the camera – it was inspiring to see.

Is there a moment that stands out?

As soon as I met Nicole [Stott], who was an astronaut, I could not help but ask her all of the stupidest, silliest questions. Within 10 seconds of meeting her, I was like, “Hi, my name is Lilly, tell me about space. What is it? How do you use the washroom?”

I mean, there are a million questions.

She really taught me a lot. Like, did you know when they’re taking off, they lay there for two hours? She told me they lie there for two hours and fall asleep, and then they wake you up and tell you they’re launching you into space. What a way to be woken up from a nap!

Obviously, late-night television is a male-dominated field. How is this message something you’ve connected to throughout your career?

I’ve always been the person who isn’t doing the norm. Everything that could have possibly made my parents raise their eyebrows, I’ve done. So this is really relevant to me because I’ve always felt that there’s been this idea like, “Oh, Lilly’s a girl so there can’t be another [female late-night host].” That’s the wrong idea. There’s space for diversity, especially in an industry like STEM where we’re talking about things that impact the world. It’s so important to have a different point of view if we want to actually maximize potential across industries.

You’ve found so much success – and this, of course, varies person to person – but have you personally found that, over time, it’s gotten easier to make strides in your career?

I think being the “first” is not something you can get used to. When I started my YouTube channel, I was one of the first Indian or South Asian women doing comedy [on the platform]. You’d think that would have prepared me to be the only current female late-night host on a major network, but it didn’t. It’s still scary, it’s still a lot of pressure. I will say that it has helped change my mindset, if I’m being really candid with you. When I was younger and I was the “first” at something, I was like, “Aww this is great.” But I’ve definitely evolved, especially with companies like Olay, and think bigger than myself now. This campaign isn’t about Lilly, it’s about true success and paving a path for other people. Why would I want to be the only late-night host that looks like me? It’s a better legacy to make space for other people.