Kourtney Kardashian And Travis Barker: A Timeline Of Their Budding Relationship

The couple was spotted holding hands at dinner this week. 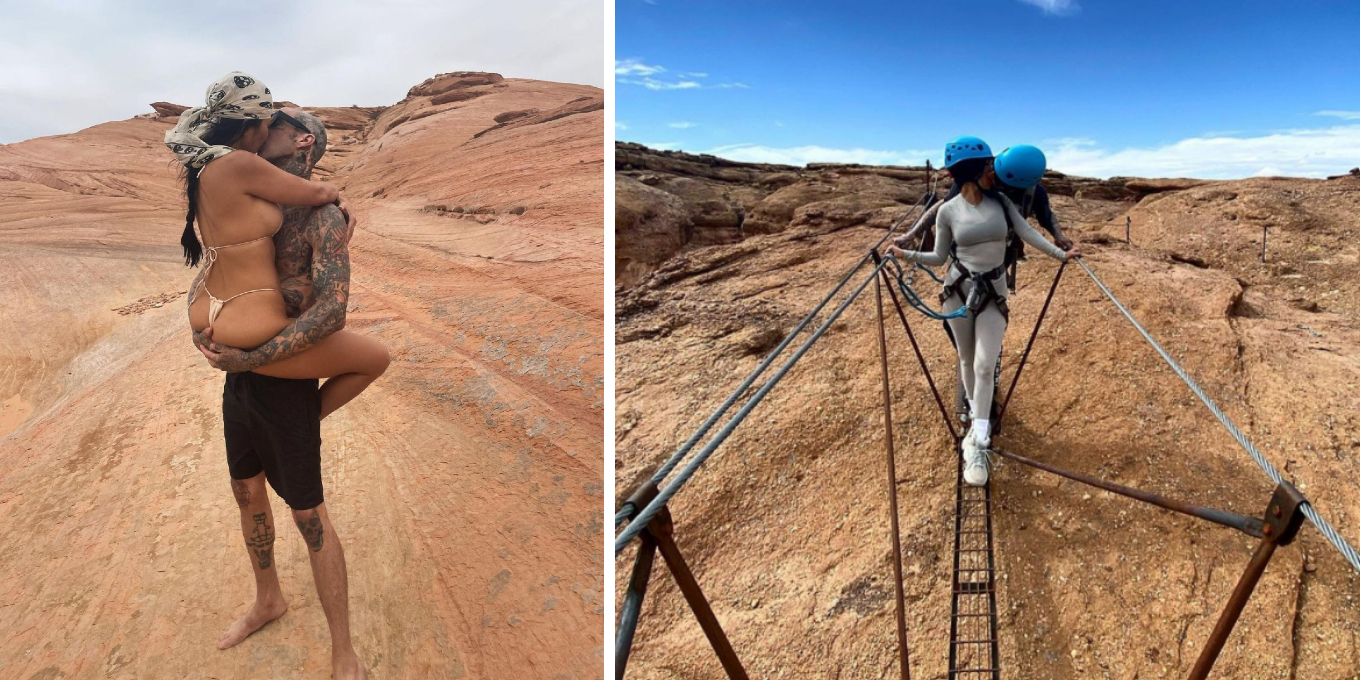 A new year and a new celebrity relationship to fawn over, thanks to Kourtney Kardashian and Travis Barker.

The Poosh founder and Blink-182 artist are rumoured to have been dating since the start of the year. Sightings of the supposed couple have been reported and in February, paparazzi footage showed Kardashian and Barker enjoying each other’s company while out for dinner in Los Angeles.

Sleuthing fans have since been digging out old tweets between the pair as they hunt for evidence of an emerging Kardashian relationship.

Kardashian – the eldest sibling of the famous family – is embarking on a new chapter in her life after wrapping up on filming the final season of Keeping Up With The Kardashians after 14 years. Nowadays, the star tends to focus on her lifestyle platform Poosh, as well as proudly posting about her three children (Mason, Penelope and Reign) who she shares with former partner Scott Disick.

Barker is most recognizable as the drummer in the Noughties-dominating rock band. However, Barker and Kardashian also have a reality TV background in common as, along with his ex-wife Shanna Moakler and their children, Barker once fronted the fly-on-the-wall Meet the Barkers MTV reality show documenting life at home with his family.

For those wondering, here’s a list of everything we know about Kourtney Kardashian’s boyfriend, starting with the most recent update:

After Kourtney Kardashian’s steamy show of affection on Tuesday, Travis Barker has now taken to Instagram to share some snaps from their recent getaway.

Hours later, the musician posted a romantic yet sultry Instagram carousel of his time away with the Keeping Up with the Kardashians star. In one photo, Kardashian can be seen relaxing on a boat with in a bikini and in others she can be seen air hiking and exploring the trails.

In one video, the Poosh founder lounges on the deck of a boat with Barker’s hand on her derrière.

‘Anywhere with you,’ Barker wrote in the post’s caption, with Kardashian adding: ‘Everywhere.’

Another day, another sensual show of PDA from Kourtney Kardashian and Travis Barker.

On Monday April 26, the Keeping Up with the Kardashians star posted a photo of herself passionately kissing the Blink-182 musician while on a romantic getaway. The sultry shot shows Barker lifting a bikini-clad Kardashian into his arms while they share a kiss in the middle of a desert landscape.

‘Just Like Heaven,’ Kardashian captioned the shot on her Instagram, to which Barker replied in the comments section, ‘EVERYTHING.’ 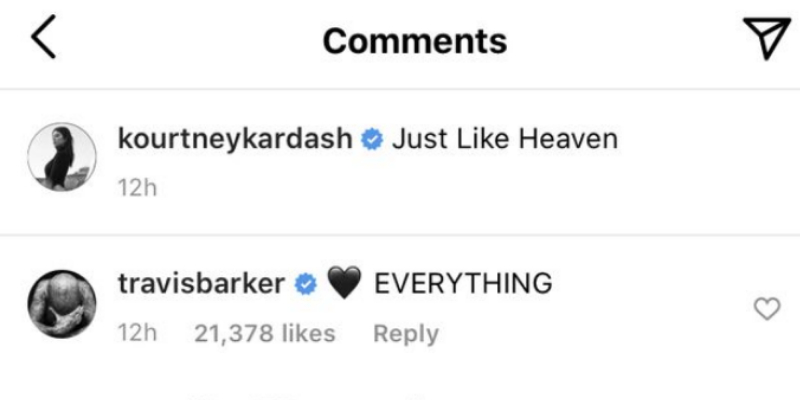 Kourtney Kardashian and Travis Barker have offered up yet another glimpse into their passionate new relationship this weekend.

On Saturday (April 24), the Blink-182 drummer shared a series of Instagram photos of himself cuddling his French bulldog, with the caption, ‘Dogs never bite me. Just humans.’ Naturally, this lead then to a part PDA, part in jest comment from girlfriend Kourtney Kardashian who commented with a vampire emoji.

If that wasn’t enough proof that the biting human in question is the oldest of the Kardashian brood, Barker then responded with an emoji of a drop of blood.

The pair’s love of PDAs and hopelessly romantic gestures is one that has been seen throughout their relationship, since they began dating last December.

Earlier this year (February 20), Barker shared a note from Kardashian with words previously quoted by Barker on Twitter on the day they became Instagram official. 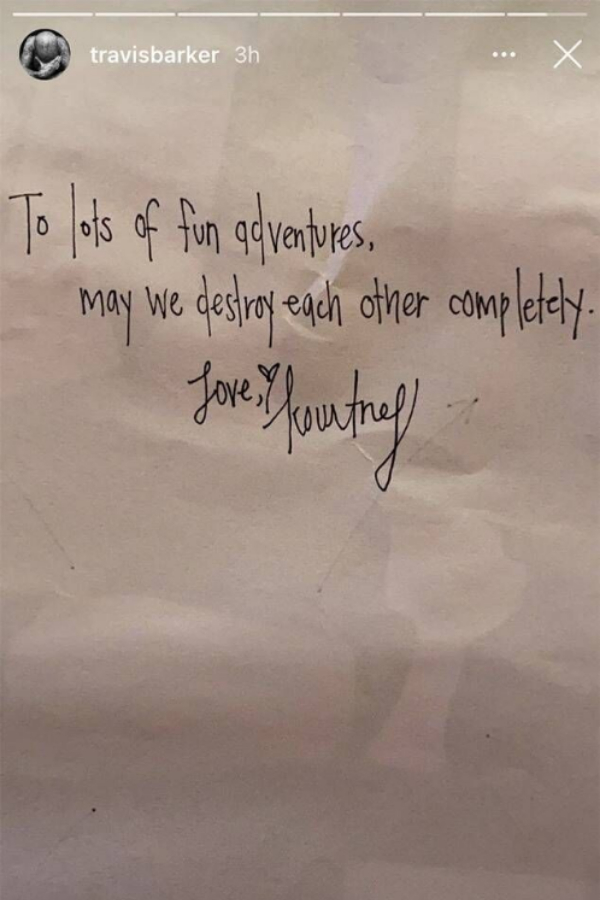 ‘To lots of fun adventures, may we destroy each other completely,’ read the handwritten note penned by Kardashian that to Barker, who posted the photo to his Instagram stories.

A few months in and Travis Barker and Kourtney Kardashian are sharing much more of their relationship with the public than before.

Kourtney Kardashian shows off this beautiful flower arrangement she received from her man Travis Barker for her birthday!! ❤️🔥 pic.twitter.com/XYctB7bjMn

On April 18, the eldest Kardashian sibling celebrated her 42nd birthday. Her new boyfriend Barker celebrated the occasion by decorating his partner’s house in her favourite flowers, tulips and gardenias. And when we say ‘decorating’, we mean there were flowers hanging from the ceiling and then even more, arranged together in an enormous bunch as a centrepiece in the hallway.

Among the many ‘happy birthday’ messages Kardashian received was Barker’s. The Blink-182 drummer shared a series of photos (and a quite NSFW video) in honour of his girlfriend’s birthday, captioning the post: ‘I F*CKING LOVE YOU! YOU’RE A BLESSING TO THIS WORLD.’

Travis Barker’s love for Kourtney Kardashian took yet another blissful turn with a new upload to Instagram, in which he showcases off his drumming skill alongside a NSFW caption.

The musician tagged his new girlfriend Kourtney Kardashian in the image which shows hi throwing a drumstick in the air next to the eyebrow-raising caption, ‘All day I dream about sex w/ you,’

This sexy declaration appear to not be enough PDA for one week, for Barker who is also now the proud owner of a ‘Kourtney’ tattoo.

Kardashian showed off the romantic ink in a caption-less Instagram post to her page that showcased the new tattoo alongside some ditsy nail art.

Barker shared a cozy, intimate clip from what appears to be a recent ski trip with his girlfriend to Instagram.

In the video, the musician and Kardashian can be seen flirting up a snowstorm as they cuddle by a fire pit, dressed head to toe in après ski garb.

‘Real is rare’ captioned the Blink-182 band member on his post.

Kardashian also shared content from the chilly getaway, but opted to post a photo of herself posing on a snowmobile in a sleek snow suit alongside a friend.

She captioned the pic with a punny nod to the landscape: ‘Up to snow good.’

March 27, 2021: Kourtney Kardashian and Travis Barker step out on a double date.

Kourtney Kardashian and her boyfriend Travis Barker were recently spotted on a double date with singer Machine Gun Kelly and actor Megan Fox.

MGK, Megan Fox, Travis Barker and Kourtney Kardashian in the house for #UFC260 🙌

Kardashian was photographed next to Barker in the VIP section at the UFC Apex, just a few feet away from Fox and Kelly who have been dating for just over a year after meeting on the set of their upcoming crime thriller Midnight in the Switchgrass. 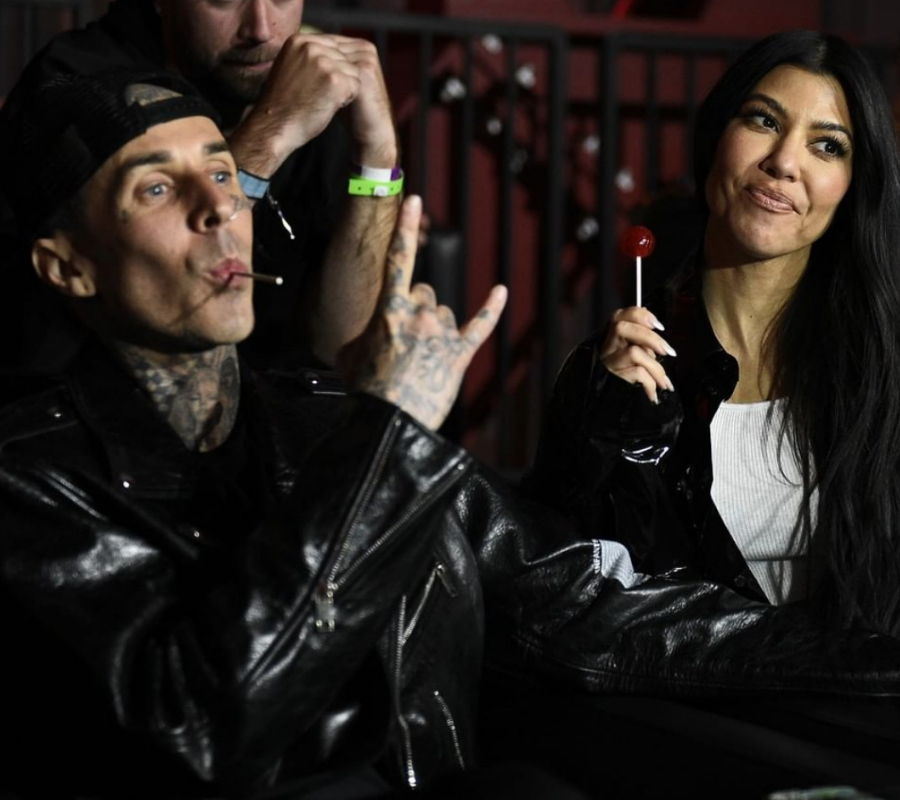 Kardashian and Baker’s relationship was first rumoured in January, with the couple made their romance ‘Instagram official’ on Valentine’s Day.

Eagle-eyed fans noticed a sweet detail in Barker’s Instagram Story in late March which indicated that the couple are quite serious about one another.

A couple of days ago, the Blink 182 drummer shared a photo of a handwritten note he had received which simply said: ‘I love you.’

Though the sweet note wasn’t signed, fans put two and two together and suggested that the note had come from Kourtney, given previous signed notes of hers have shown the same distinctive handwriting.

The note, of course, suggests that the former friends and neighbours have turned their relationship up a notch and are happy together in love.

After videos (via E! News) showed Kardashian and Barker out for dinner on February 12 and the pair sharing snaps of the same fireplace on their social media accounts on Valentine’s Day, the reality star has seemingly confirmed their relationship.

The mother-of-three just shared an image of her holding hands with a man with very distinctive tattoos. While she posted the photo without a caption, Barker subsequently share the same snap on his Instagram Stories to confirm the pair are an ‘item’.

Just a couple of days ahead of Valentine’s Day, Kardashian and Barker were spotted dining outside at a Japanese restaurant in Los Angeles holding hands across the table. The couple, who were both wearing leather jackets, looked relaxed and happy in each other’s company in footage obtained by E! News.

Some eagle-eyed fans connected the dots last month when, according to E!, Kardashian shared a picture of herself relaxing in Palm Springs and then shortly afterwards Barker posted photos to Instagram featuring the same background. A couple of days later the celebrity news outlet reported apparent sources’ claims which seemingly confirmed that the couple are dating.

‘It’s been very low-key,’ said the source. ‘They are a really good match, and Kourtney’s entire family already loves Travis. They have been neighbours and great friends for years, and it just recently turned romantic. Travis has always had an eye for Kourtney. The chemistry and flirtation has always been there. They have a lot in common, and Kourtney has always been attracted to how Travis is as a parent. He’s an amazing, hands-on dad, and Kourtney loves that about him. They love relaxing at home with their kids, and everyone gets along. It’s going well, and they aren’t putting pressure on it being super serious at this point.’

E! added that the couple began dating around December 2020. Since then there have also been back and forth emoji-filled comments on each other’s Instagram pages too.

As reports about the couple dating started emerging, an interview with Barker from 2019 also circulated. Two years ago, the drummer was asked directly during an interview with People magazine if the two were an item following rumours.

‘Kourtney’s like a dear friend. That’s it. I mean, I love her to death. I love her family to death. But yeah, just friends,’ he said at the time.

It seems like Kardashian and Barker have a historic close friendship, which is always a solid foundation to start a relationship.

Kourtney Kardashian Says ‘Keeping Up With The Kardashians’ Became a “Toxic Environment” For Her
Kris Jenner Breaks Her Silence On Kim Kardashian And Kanye West’s Divorce
The Kardashians Have Officially Filmed the Last Episode of KUWTK, and it Got Pretty Emotional