Katie Holmes on her latest role as global ambassador for Olay skincare, making her directorial debut and what she's most grateful for. 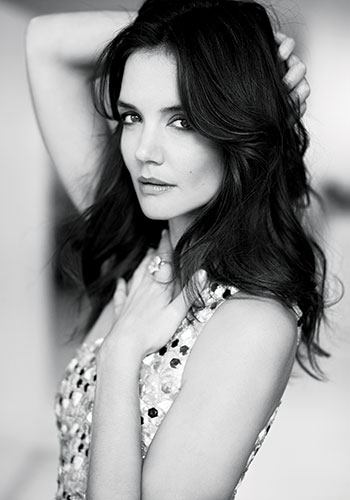 Katie Holmes is sitting on an alabaster couch, star­ing into the brick fireplace. Her navy cashmere cape re­flects the cool tones in the painting hanging across from us. Grey New York light filters through the windows. She looks comfortable in this calm environment—maybe because it’s chic, polished and just a touch impersonal. After all, this minimalist setting is actually the stage for a photo shoot that will spring to life later in the day.

It’s a fittingly neutral scene for the actress, who is no­toriously private. After years of tabloid fervour surround­ing Holmes’ marriage to, and subsequent divorce from, Tom Cruise, she rarely sits down for interviews and barely engages with social media, explaining that she didn’t grow up with it so it still feels foreign to her.

Although Holmes must be used to living a somewhat exposed life, sitting across from her evokes the same feeling you get when you spot a fawn at the edge of a clearing: She is delicate and much more beautiful than you would expect, but you know that at any moment she might dart off, preferring to be alone rather than stared at.

Holmes chooses her words carefully, often stopping to brush a twist of dark hair off her face. For example, when she’s asked what makes her feel confident, she pauses and then asks to move on to the next question. She appears to pick her projects with just as much care. “It’s a very hard business,” she explains. “You have to work hard every day and hope for the best. Sometimes offers are flying in, and sometimes they’re not.”

Despite the fact that she scored projects like last sum­mer’s The Giver, alongside Meryl Streep, she also lived through a fallow period in her career after the birth of her daughter in 2006. She tried her hand at Broadway twice—to mixed reviews—and launched the now­-shuttered cloth­ing line Holmes & Yang with her then stylist.

Today, however, the 36-­year­-old actress is on a roll. She’s the global ambassador for Olay skincare, she re­cently starred in the quirky indie film Miss Meadows and she’s gearing up for her directorial debut on All We Had, a film adaptation of Annie Weatherwax’s bestselling book by the same name. “There aren’t as many movies being made, period, so the challenge is to create projects for yourself,” she says. “But that’s fun too. You have to make your own opportunities.”

That’s one of the reasons she was so taken with the idea of directing All We Had. The story, which is about a mother and daughter struggling to build a life together in small-town America, is one that resonated with Holmes, who grew up in Toledo, Ohio, and is now raising her daughter, Suri, eight, in New York City and L.A.

“I think that seeing two people on the edge of poverty in America is an important story to tell,” she explains. “It reminded me of Terms of Endearment. It’s a simple story but with two great roles for females.”

When we start to talk about her decision to direct, Holmes’ quiet guardedness lifts and she becomes genuinely animated. “I’m scared, but I’m going to give it a try,” she says with a grin, adding that she was inspired by directors like Sarah Polley. After all, Holmes is always “looking for stories that really show women in the best light,” which is why she was eager to jump on board with Olay.

(Its latest campaign encourages women to put themselves first. In the ad spot that launched the series, Holmes purrs “Why settle?”) “I have three sisters and a ton of aunts and a lot of friends, so I’m constantly amazed and inspired by all kinds of women and the dedication it takes to have a career and be a mother,” she says. “I’m also amazed by the community of women it takes for one person to really succeed. I think that that’s really important to remember.”

Growing up as the youngest of five siblings in the American Midwest, Holmes started modelling classes at 10 years old but was told as a teen that she would never be tall enough. (That seems hard to imagine as I watch her stroll about unhurriedly in towering Christian Louboutin suede boots.)

She soon began getting acting auditions and famously turned down the offer to try out for Dawson’s Creek because she was starring in her high-school production of Damn Yankees. She sent in a videotape instead, filmed in her basement. The raw footage was enough to score Holmes the now-iconic role of Joey Potter in the teen odyssey about love, loss, friendship and growing up.

The role firmly solidified her as America’s tomboy sweetheart. “I don’t know if I have moved past it, but I don’t really care,” says Holmes with a smile. “I had a ball doing it, and it’s really nice to be a part of something that did affect people. And it created a lot of opportunities for all of us. You can’t really ask for much more than that.”

Dawson’s Creek fans are “all grown up now,” says Holmes, joking that these days they’re probably more apt to be watching Disney shows with their kids. Which suits her just fine because she doesn’t sit around thinking about past successes. “I just keep going,” she explains with charming Midwestern practicality.

“That’s what I do: I don’t really think about it; I kind of just keep going.” I ask her if she considers herself to be a particularly ambitious person—after all, she lights up when she talks about getting around challenges, like an athlete stepping through tires in an obstacle course.

“No, I’m really not,” she says with a laugh. “I think ambition is a wonderful thing, but I see a lot of people who might be a little bit more ambitious [than me]; I just do what I do and go home. I have a balanced life. I like having different experiences, and I like being inspired.”

It’s hard not to speculate about whether Holmes, who went from being a budding young star to the female lead in one of the world’s most famous couples to a working New York mom in only a matter of years, would have done things differently if given the chance—if she would have chosen a different set of “experiences.”

When asked if she’d go back and give herself any advice, Holmes is firm. “I’ve always been adventurous, so I wouldn’t tell myself anything,” she says. “I liked who I was at 20, and I think that you just have to go along for the ride with everything.” As if to silence any further debate on the matter of regrets, she smiles and continues with a steady tone: “I have a lot to be grateful for, so I do count my blessings every day. I really do.”