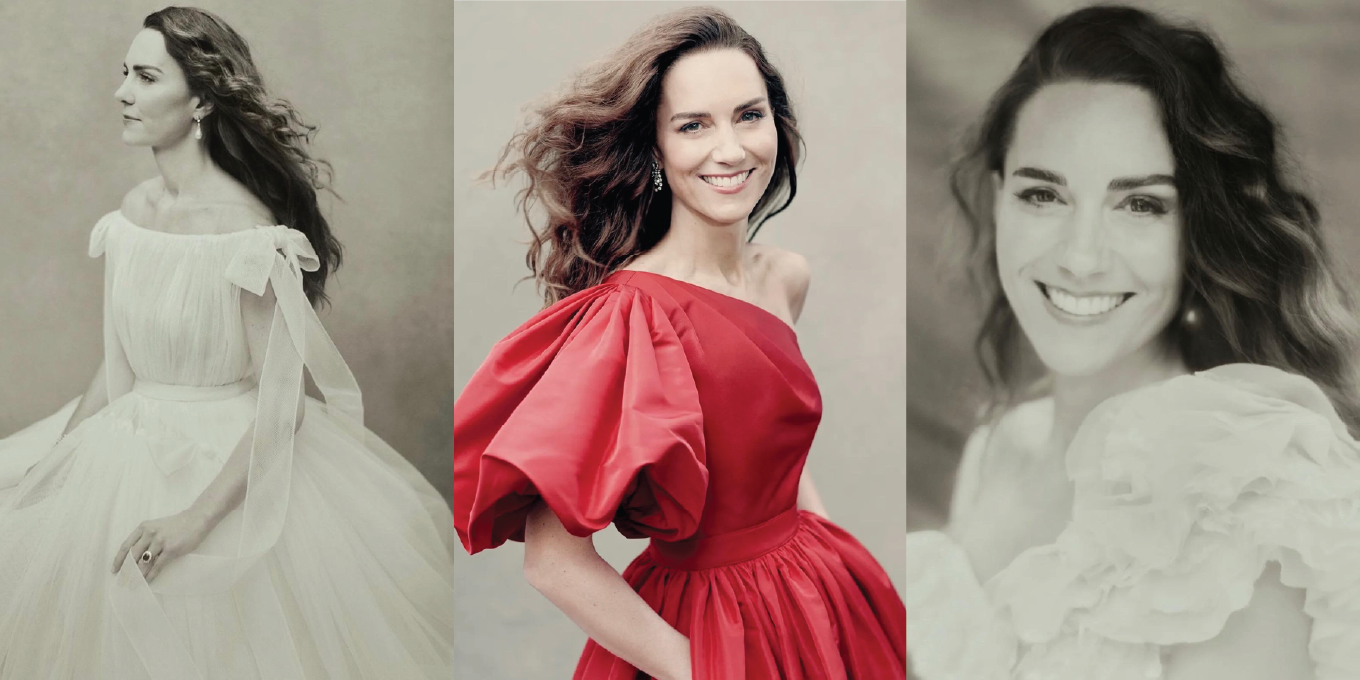 Kate Middleton has commemorated her 40th birthday with a series of special portraits in which she pays tribute to the Queen and Princess Diana.

Ahead of her milestone birthday on January 9 the Duchess of Cambridge shared the images on her and Prince William‘s social media accounts. The portraits include two black and white photos of her wearing two ethereal gowns, and a coloured picture of her wearing a scarlet red dress, all designed by the British fashion house Alexander McQueen.

But, there’s more to these photos, taken by fashion photographer Paolo Roversi, than what appears at first glance.

All three portraits, which are set to appear in the National Portrait Gallery as part of a permanent collection when it reopens in 2023, subtly nod to two important royal women in the Duchess’ life – the Queen and Princess Diana.

The image of the mother-of-three wearing the asymmetric red puff-sleeve gown shows her wearing a pair of drop diamond earrings which were loaned to her by the Queen.

In May last year, Middleton borrowed a pair of sapphire and diamond earrings from Her Majesty to watch Cruella at Scotland’s Palace of Holyroodhouse drive-in cinema. And she borrowed them again to host a carol concert at Westminster Abbey last month.

The Dubai Looped Sapphire Demi-Parure were originally gifted to the Queen when she toured the Middle East in 1979.

In another one of Middleton’s recent portrait photos, she’s dressed in a ruffled dress and looks directly into the camera. She accessorized the look with pearl earrings that formerly belonged to the late Princess Diana.

In another photo she wears an ethereal white gown with a should-baring neckline, trimmed with gauzy ribbon.

And that’s not all, as her hand is positioned in a way that spotlights her 12-carat oval sapphire engagement ring, previously owned by the late Princess of Wales after Prince Charles proposed in 1981.

The Duchess of Cambridge has been championing historical royal jewellery for years, including the time she wore the Queen’s large diamond-cluster teardrop earrings for the North Atlantic Treaty Organization (NATO) reception at Buckingham Palace in 2019, reportedly also worn by Her Majesty at the State Opening of Parliament in 2012.

At the time, the royal donned an emerald green Alexander McQueen dress.

Prior to the reception, she wore the same earrings to attend the Anna Freud Centre gala dinner, held at Kensington Palace, not to mention the Diamond Quatrefoil Bracelet given to Her Majesty from the Queen Mother.

Among the numerous other pieces she’s borrowed from the Monarch is the ruby and diamond floral bandeau necklace, gifted to the Queen by her parents, and the Queen’s four-strand pearl choker.

When it comes to Princess Diana, Middleton wore her Lover’s Knot Tiara to the Diplomatic Receptions at Buckingham Palace in both 2015 and 2016.

And she isn’t the only duchess to have borrowed pieces from the royals’ prized jewellery collections.

Meghan Markle wore the Queen Mary Diamond Bandeau tiara, made by the Queen’s grandmother Queen Mary back in 1932, for her marriage to Prince Harry in 2018.

Read more:
Kate Middleton’s Most Iconic Style Moments
How Prince Harry and Meghan Markle Paid Tribute to the Late Princess Diana With Their Pregnancy Announcement
The Role of Princess Diana Has Been Cast in The Crown‘s Final Seasons