Kate Mara has always been driven, but for this charmingly straightforward House of Cards actress, the time is now. 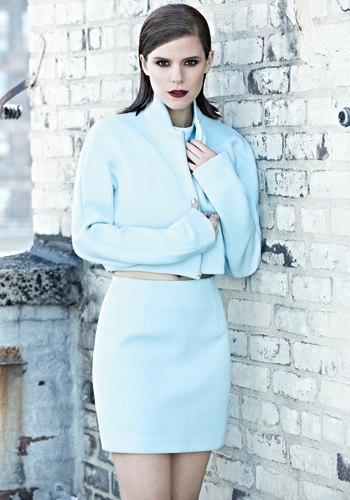 Kate Mara throws her
black leather Carven jacket casually over the back of the makeup chair in the sparse photo studio and plunks herself down. A round robin of praise starts: “What a wicked moto jacket.” “You look so cool.” The 30-year-old actress lets out a playful laugh. “It’s my sister Rooney’s jacket. I can’t take credit. I just shopped her closet.”

In person, Mara is softer, more fawnlike, than Zoe Barnes, the complicated character she plays on Netflix’s hit political show
House of Cards (
HoC), but she is equally ballsy. Twenty minutes into the prep for our shoot, Mara convinces the hairstylist to whip out scissors and
chop a few inches off her auburn hair to “make things more interesting!” When her long-time boyfriend, actor Max Minghella, drops by, she introduces him around and then plops unselfconsciously onto his lap.

The New York-based star wasn’t always this self-possessed. “I was very shy as a kid,” she explains. But as Mara watched old movie musicals with her mom and sister, she realized that acting could be an escape. “Most of my friends and family members had to figure out what they wanted to do. That was never a challenge of mine,” she says, a twitch of a smile brightening her face. “I was motivated and ambitious. I had a crazy drive…. Pretending to be different people was my way of not being shy.”

Her family supported her resolve. Mara travelled to auditions with her mom and landed her first studio movie when she was 15 years old. In
Random Hearts, with Harrison Ford and Kristin Scott Thomas, Mara played the teenage daughter of an ambitious Republican congresswoman whose husband is having an affair. Though she later starred alongside Mark Wahlberg in
Shooter and James Franco in
127 Hours and guest starred on
American Horror Story, it’s fitting that her first role was in a highly charged political film. In
HoC—in her most recent, and arguably most exciting, role—Mara plays an enterprising journalist who is entangled in an affair with a cutthroat Democratic congressman, played by Kevin Spacey. Their relationship (and the riveting show itself) is as much about sex and power as it is about politics.

It’s hard to picture a
shy girl playing the brash Zoe, though. “I became more confident as I got to know myself,” says Mara, laughing. “That’s why I don’t think getting older is so bad. I was also an old soul when I was a kid. I wanted to get out of school so that I could start my little life.” But as ready as she was to take on an adult acting career, Mara’s childhood was pretty cinematic. As the great-granddaughter of both the New York Giants founder and the Pittsburgh Steelers founder, she is one of the princesses of the NFL royal family. She grew up in leafy Westchester, across the street from several of her cousins. (She has “hundreds of cousins.”) “There was a never-ending supply of family members,” she says excitedly. “We’d go to football games as a family every other Sunday.”

Is she still a football fan? “You’d have to be an idiot not to find it important, being in my family,” she shouts. “When I was a kid, it was just fun to go and hang out with my cousins. When I was 18, I started paying attention to how incredible it is that my family started the teams. That’s when I realized what an important story it is in my life.”

Career advice: How to LAND YOUR DREAM JOB

So important, in fact, that after missing the Steelers’ Super Bowl win in 2006 because of an acting gig, she worked a clause into her next contracts to make sure she’d never miss either of her two teams playing the big game again.

While her family shares an unmatched sporting legacy, they also bond over film. “I’m obsessed with going to the movies,” she says, laughing. “I see everything.” (From Los Angeles, she trades regular emails with her two brothers, who still live in New York, fighting about what films they loved and hated.) Of course, now she shares acting with her younger sister, Rooney, the edgy star of
The Girl With the Dragon Tattoo. Critics have cooked up many Hollywood-worthy stories about the sisters. (You know the cliché: A younger sister sweeps into the industry and racks up accolades while her older sister continues working quietly.) That’s fiction, though. Mara is clear that there is more than enough work—and praise—to go around. “I started so young, so I had the experience of doing it on my own for a long time,” she explains. “Then to have somebody I could really bond with over the experience, the excitement of it, the rejection and all of that?” She’s beaming. “It makes it easier knowing that someone who shares your blood also shares your passion and can understand the ups and downs of it.”

One of Mara’s ups—one that her movie-loving family is feverish about—is sci-fi thriller
Transcendence with Paul Bettany and Johnny Depp, out this April. “People are like, ‘What’s it like working with Johnny Depp?’ and I have no idea,” she says with a laugh. “I wanted to do the movie because the role was very different for me and anything I’d done, but, funnily enough, I had no scenes with Johnny Depp. I met him for 10 seconds. He wouldn’t know me if he saw me.”

She’s being too modest about her reputation. A
Canadian writer and blogger—who resembles the actress—recently tweeted Mara that some “guy just maniacally asked about the next season of
HoC, realized I wasn’t you and swore. I took one for the team!” So although Mara describes her day-to-day life with insouciance—she walks her dogs, Bruno and Lucius, she people-watches,
she works out—it’s clear that, soon, nothing will be as it was. The work she has been getting steadily since she was a teen has changed gears: She’s a star now, not just an actress. She crinkles up her delicate features at the suggestion that getting recognized might change her life—that it might swing the balance she has set out for herself that pairs hanging out with her boyfriend with attending the Emmys. Then she smiles. “I’m just as excited today as I was when I had my very first audition.”

But, with all that’s in store for her this year, maybe she should be even more excited.