Kate Bosworth: Why it's pretty great to be in her shoes

With a crop of new movies and a covetable collab, Kate Bosworth reveals why she’s excited about getting older. 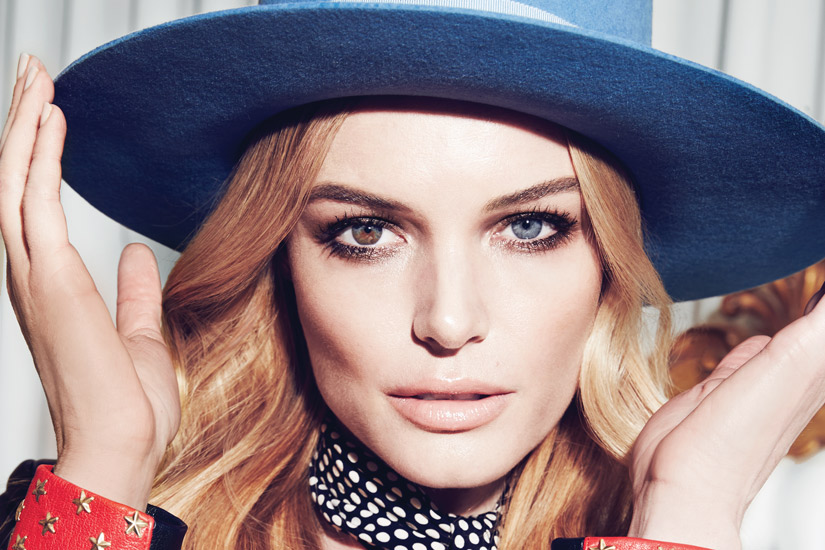 When you think of Kate Bosworth, what comes to mind? Almost certainly those eyes, one blue and one hazel, set in a face that’s a photographer’s dream. Then there’s her signature California style. She’s one of those enviable fashion savants who move effortlessly from Coachella to Cannes, generating a million Pins along the way.

And, of course, we can’t have one of these “what we talk about when we talk about Kate Bosworth” moments without bringing up her career—in particular, her defining role in Blue Crush as well as her success in indies like Big Sur or her most recent role in Oscar contender Still Alice.

What you may not know about her is that she’s a whisky-drinking romantic who is passionate about female empowerment, clothes and rock collecting. The 32-year-old is also a hands-on, getting-the-right-shade-of-gold-for-a-stud- obsessed shoe designer who just collaborated with Matisse Footwear on a 10-piece collection.

In a conversation over the phone (occasionally interrupted by her new and naughty Blue Picardy spaniel pup) a few days after our shoot, Bosworth talks about how the designs were inspired by key moments in her life. So let’s take a metaphorical walk in her shoes and see what we can learn….

On the surface, these boots are a fairly straightforward homage to Ed Ruscha’s famous Hot Shot print. Bosworth is an avid art collector and counts this Los Angeles-based artist as one of her favourites. On another level, they also reflect Bosworth’s quirky sense of humour.

“I always laugh when people ask me about my high-school style,” she says. “I grew up in small-town New England, where the clothing selections—Patagonia, North Face and L.L. Bean—kind of baffled me. It was never about fashion. It was about battling the harsh winter elements.”

She credits her father, an executive at Ermenegildo Zegna, with instilling an early love for quality. “He would bring me on the train to Manhattan,” she recalls, “and he’d introduce me to different textiles and explain why one material was more expensive than another.”

Fast-forward a few decades and Bosworth is now known for being an actress and a “hot shot” player in the fashion world. She has two Topshop collabs on her resumé, she launched Jewelmint, a jewellery website, in 2010 and last year she came out with Style Thief, a fashion-finder app. Oh, she’s also besties with designer Jason Wu and on a first-name basis with Karl.

One of her favourite memories of the famed Chanel designer is the time he escorted her to the Met Ball in 2008 in a van with a disco ball. “Karl introduced me to everyone and made me feel included,” remembers Bosworth, who describes the designer as “sensitive, sweet and very funny.”

“The greats in this world don’t live to intimidate,” she continues, referencing Julianne Moore, Sigourney Weaver and Alexander Wang. “They’re all incredibly kind.” Bosworth is conscious of extending that same helping hand in her own life. She’s involved with the tween-empowerment charity I Am That Girl and recently started mentoring an up-and-coming jewellery designer.

“Ambyr Childers is just starting out, and I know how daunting that can be,” says Bosworth, adding that she still feels like the new girl at school when she walks onto a film set. “I said to her, ‘I’m a fan, and if I can help you out, I will.’”

Of all the parts Bosworth has played, she is probably most known for her role as a teen surfer in 2002’s Blue Crush. “I’m proud of that movie,” she says, calling it the most important moment of her career. “So many women have told me that it empowered them.”

It also inspired her. At the time, Bosworth says, she was only being offered what she calls “typecast roles for a young blond girl.” In the film, she plays a female surfer who challenges stereotypes in a male-dominated sport. Now that she’s in her 30s, Bosworth says, she’s relishing the freedom to choose emotionally demanding roles.

In fact, Bosworth was happy to leave her 20s behind. “There’s only so much you know about yourself at that age and only so many roles you can play,” she says, describing the decade as “beautiful and pure” but also “scratchy.” “You get all the battle wounds and scars, but there was a point where I started looking for more complex roles, and I had to wait to grow into that.”

Instrumental in this growth was Bosworth’s husband, Michael Polish, whom she met when he directed her in the Jack Kerouac biopic Big Sur. Polish is 12 years her senior, which is something Bosworth loves. “We’re best friends, but he’s also my mentor artistically and in life,” she reflects. “He can say ‘I know this feeling; let me help guide you through this.’”

Bosworth describes herself as a very driven person who takes things on “fully.” “Michael is always saying to me ‘Patience, darling, patience,’” she says with a laugh, adding that she has learned that not having it all can be a good thing. “It’s such a tall order and so much pressure. If everything is polished on every corner, you don’t have the jagged edges.”

This new-found appreciation for “messiness” is influencing the roles she plays. Case in point: the upcoming supernatural horror flick Somnia, in which Bosworth plays a grieving mother who thinks she sees her dead son. “I thought this was unusual behaviour,” explains Bosworth. “But then I realized that that’s the power of love: It makes you do crazy, beautiful things.”

When she was six, Bosworth loved collecting rocks and taking them in a shoebox to a local museum. She says that the heel on this slide is a nod to her happy childhood. “You grow up, but there’s always a core part that never goes away.” She pauses. “I was raised with a lot of love, and I was fortunate because I wasn’t looked at in a gender-specific way. My father taught me to throw a football, and he also talked to me about film and art.”

READ MORE: The 10 most stylish men in Canada

Bosworth also credits her mother and grandparents for instilling in her a solid sense of self. When asked if she defines herself as a feminist, Bosworth first compliments Emma Watson for the speech she gave on the subject at the UN, where she invited men to partner with women. “I was so moved by her,” says Bosworth. “I think the word ‘feminist’ should feel inclusive and be about equality rather than a tipped scale. She high­lighted that so brilliantly.”

Bosworth says she wants to nurture that point of view in her 17-year-old stepdaughter, Jasper. “Watching her grow into a young woman, I’m reliving my own life. I’ve been struck by how that transition is a beautiful journey that can be challenging at times,” she says. “Being a stepmom is one of the most important aspects of my life.”

The other defining relationship in Bosworth’s life is her marriage. Her husband’s name comes up often in conversation; apart from being a mentor and an inspiration to her, he is also very clearly her Prince Charming. “It was always a profound connection,” she explains. “But getting married gave this a feeling of beautiful perma­nence.” She goes on to add that it’s in the lows of life—like her beloved grandfather’s illness last year—that she most appreciates her marriage vows. “Our relationship isn’t hard, but life is. It feels very deep to know that no matter what gets thrown at you, this person is not going anywhere.”

Her favourite photograph of the couple was taken at her August 2013 wedding in Polish’s home state of Montana. “The photo was ac­tually an accident,” say Bosworth. “We were about to toast each other with glasses of whisky, and then Michael looked at me and said, ‘Stop—I want to take a picture of my wife.’ And it’s the picture that really represents our new life.”

It’s a life that is filled with rich and varied experiences. Bosworth says she isn’t content to just be an actress (although she does have a number of films being released this year, including the thriller Bus 657 with Robert De Niro). Instead, she wants to follow her bliss, whether that is designing shoes, chasing her dream role or spending time at her Montana ranch writing children’s books about her dogs (which she totally plans to do, by the way). What she’s not worrying about? What we talk about when we talk about Kate Bosworth. “I learned from a young age not to open that door,” she says firmly. “I have wonderful friends and family, and that’s what matters.”