Jennifer Lopez is hotter than ever!

After taking some time off from the celebrity spotlight, megastar Jennifer Lopez is back with two new albums and films. Is she still a Cristal-sipping diva? 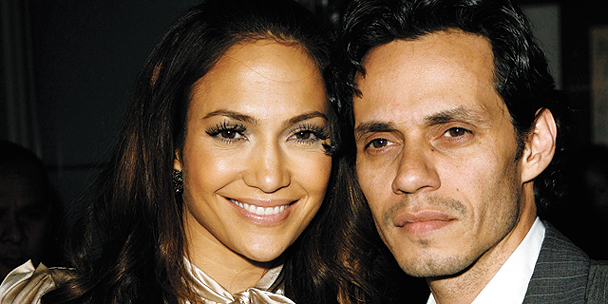 Jennifer Lopez is clearly one very happy woman. The reason for this becomes apparent when she stops mid-sentence to check her BlackBerry. “It’s from Marc,” she says, her face softening as she scrolls down the tiny screen. “We’re having a night in tonight — just the two of us. He wants to know when I’ll be home.” She grins as she pulls her cozy grey cashmere sweater around herself and stretches her denim-clad legs out on the coffee table in front of her. Right now, she’s in the mood to talk about everything — love, music, moisturizers… and Marc.

“I don’t think I’ve ever felt this settled or balanced or focused in my life,” she says with a smile. “It feels just amazing to me.” Lopez has undergone a metamorphosis of sorts. Three years ago, six months after she quietly married Latino singer Marc Anthony in the backyard of her former Hollywood Hills home, she made the decision to stop being JLo — to step away from the madness of celebrity and find out exactly who Jennifer Lopez is.

She can’t help but empathize with Britney Spears, whose face is splashed across the tabloids week after week, as Lopez’s once was. “I feel very sorry for Britney because I understand what she’s going through,” she says. “It’s very easy to judge from the outside, but if you’ve been in that situation, you know how hard things can get. Everything becomes so mad. I mean, the lifestyle can be great and exciting, but it’s just totally full-on. I decided to get off the spinning-carousel ride. It was a definite choice I made, and I have to say that it was quite a scary one because — even though you know you want the madness to stop — once you stop it and get off, your first instinct is to panic and jump right back on again. But I wanted peace and balance in my life. I wanted to take stock and, most of all, I wanted my marriage to work — I so, so wanted it to work.” She laughs wryly. “Believe me, I’ve made all the mistakes where relationships are concerned. I’ve been burned, I’ve been bashed and I’ve been beaten, but I’ve never allowed myself to stop believing that one day I would get it right. I knew I had to give our love a chance to grow without being swamped by the whole celebrity circus.”

Her rise to fame
In truth, Lopez’s story has always been unbelievably high-octane. Born in the tough Bronx area of New York, she says that she was determined to be a star. After years of endless auditions as a singer, a dancer and an actress (“I always cast my net wide,” she says, laughing) and small breaks on TV shows, her sudden, dramatic rise in Hollywood came — thanks to the sort of sexual chemistry that money can’t buy — when she co-starred with George Clooney in the film Out of Sight. All of a sudden, she was a star. She was the first Latino actress ever to command $1 million per movie and the first actress in decades to prove that a curvy size 6 can scorch a screen unlike anything else.

Lopez’s marriage to former waiter Ojani Noa disintegrated in the first flames of her success. Undaunted, she launched herself not only as an actress but also as a singer and fashion icon. Alongside her multimillionaire rap-star boyfriend, Sean “P. Diddy” Combs, Lopez heralded a new era of diamond-encrusted diva bling. The tabloids were full of tales about her demands for 600-thread-count sheets, all-white rooms and Cristal champagne. In 1999, Lopez and Combs were at a New York nightclub where three people were injured in a shooting; both were arrested but later cleared of any involvement. By 2001, their relationship had crumbled. Less than a year later, with helicopters flying overhead and the paparazzi risking their necks for just one shot, Lopez married her quiet, caring dancer Cris Judd. A year on, that relationship ended too (although they remain friends to this day), and, in 2002, she began her craziest romance ever, with her Gigli co-star, Ben Affleck.

Tabloid headlines featured “Bennifer,” their press-anointed joint title. It was a high-speed love affair: there were pink diamonds, fast cars and the sort of Hollywood excess that was fated to crash and burn — which it did, when all speculation about their marriage ended after Affleck’s ill-advised fling with a lap dancer.Finding real love
Less than six months later, Lopez married 38-year-old Anthony. She was well aware that every critic out there was just waiting to see the relationship fail. But this time, it really was different. First of all, she married a man who is secure in his own status as one of America’s biggest Latino stars and a man she respects hugely for his talent as a musician. Most importantly, the couple shares a similar history: both were born into working-class Puerto Rican families who lived within a few kilometres of each other, and she even dated him briefly in 1999. “Marc has known me for years,” she says. “He has seen me through every stage — in good times and bad times — and he was always just there.” Lopez pauses and smiles as she explains: “You know, when you’re very young, you think that it’s all about the big, dramatic stuff: the diamonds, the excitement and that sort of thing. As you get older, you realize that what keeps a relationship going in the more humdrum, domestic stuff. I wanted to have that with Marc. I wanted to stay home and cook for him — to be there when he came in the door and to be the one doing something small, like bringing him a Coke when he sat down at the table. I wanted to look after his needs. I know that people have criticized me a lot in the past, and I’m the first to admit that I’ve made mistakes along the way.” She laughs. “You see, I now think of myself as the great explorer of love — a kind of Christopher Columbus of romance. I’ve been through some rough seas and I’ve had some disasters, but in the end I found what I was looking for.” She bursts out in a fit of giggles. “Can you believe I just said that?” she says, then pauses. “But it’s all true.”

Perhaps the greatest test of their relationship came when Anthony co-produced her latest album — her first ever in Spanish entitled Como Ama Una Mujer (How a Woman Loves). It’s a hugely romantic, ballad-filled epic of an album. Lopez’s voice has never sounded so pure or confident. “That’s because it’s all about love,” she says. “And that’s what I know about — the good and the bad. Working with Marc made it the best recording experience of my life. As a singer, I often feel insecure, and a producer will give me a lot of directions and advice about how to use my voice. Marc didn’t do any of that. He just looked at me and said: ‘I know you can do this. Sing the words. You know what they mean. You can do it.’”

The famous body
Indeed. Lopez is back with a vengeance with the upcoming release of two new movies — El Cantante and Bordertown (for the latter, she was recently given a humanitarian award by Amnesty International) — and another album that’s due out this fall. “When I first told my mom that I wanted to go into show business, she gave me the best advice. She said, ‘Hey, if you want to be in that business, don’t ever let me catch you crying.’ I’ve had some tough times over the past few years because I’ve gone through this process of adjustment. But I’m never going to ask for sympathy because I know that what I have is unbelievable. You have to be grateful for what you have in life and make the best of it.”

In body terms, no one believes this more than Lopez. For the past decade, she has remained a steady size 6 and point-blank refuses to bow to the current super-skinny double-size-0 trend. She shakes her head. “For me, looking good is all about looking healthy, and the ultimate beauty secret is being happy with yourself,” she says. “I couldn’t ever be a size 0 — I just don’t see how I could get down to that size and still be healthy. I have a butt, I have boobs and I have a woman’s curves — there’s no way I’d see them go to size 0. In Hollywood, I’ve always been seen as a big girl. But I like my body. My husband likes my body! I’m not obsessive: I work out with a trainer two or three times a week, but I’ll go months without any exercise at all. I just keep myself in check.”

Lopez is definitely looking better than ever. Her skin is glowing, and her hair –back to its natural dark brown — is shiny and lustrous. “I don’t do anything fancy,” she says. “I just try to stay as healthy as possible. I don’t even use a moisturizer these days. I see a dermatologist, who gives me a sunscreen that I use daily. Other than that, I use nothing. The only time I moisturize my whole body is when I go on a long flight. I keep my skin hydrated by drinking water, and I always get eight hours’ sleep.”

As Lopez laughs and raises her hand to her face, one can’t help but notice the massive blue-diamond ring on her index finger. “Isn’t it gorgeous?” she says. “Marc gave it to me for our first anniversary. In the morning, he gave me a little ornament and I thought it was sweet, but, later, when I was cooking his dinner, he came up behind me and just thrust this into my hand. He was so excited about it, he didn’t even wrap it. I love it! I wear it every day, and it makes me smile every time I look at it. It makes me realize that, whatever happens, I’m a very lucky girl.”