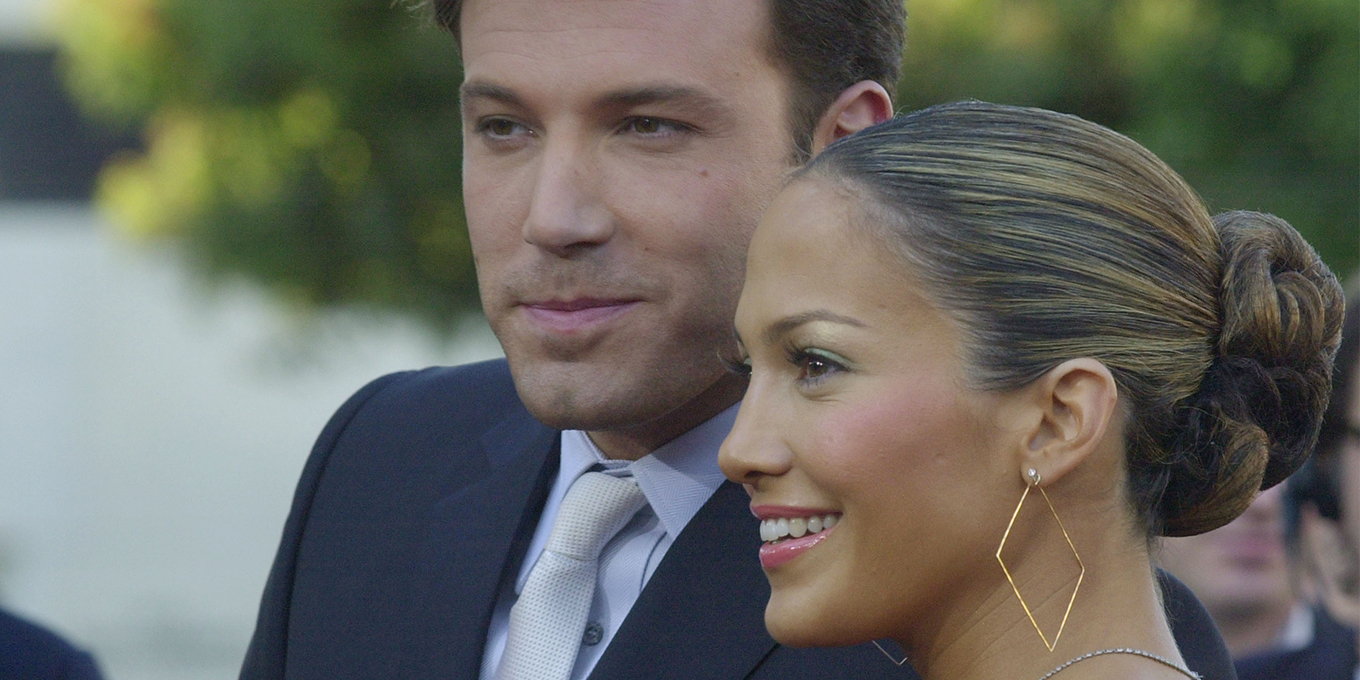 Cast your mind back. It’s 2003. You have a polyphonic ringtone on your Nokia 3310. You wear bandanas and own a hair crimper. Your eyebrows have been plucked to oblivion, you log onto MySpace and the song of the moment is ‘Jenny From The Block’ where Jennifer Lopez sings about still being the same woman she’s always been despite her “rocks”, riches, fame and A-lister boyfriend Ben Affleck, who frolicks with her on a yacht in the unforgettable music video.

Affleck and Lopez, or Bennifer as they were dubbed by the press (though in the past few days filmmaker Kevin Smith has claimed he is responsible for its origin), were tabloid favourites. Despite their widely-panned rom com film Gigli at the time, their undeniable chemistry, red carpet gazes of adoration and one heck of an engagement ring seriously captured the attention and hearts of the public and the media.

While the COVID-19 pandemic has made time feel like a unverifiable concept, we now have evidence that it is. Because, it’s 2003 again and Bennifer has risen.

Are they just friends with a shared history? Has a new bonding of similar experiences led them to seek comfort from an old friend (while Lopez recently broke up with Rodriguez, Affleck experienced a split in the public eye when he separated from his wife of 10 years and the mother of his three children, Jennifer Garner, in 2018 and more recently following the end of his relationship with actor Ana De Armas)? Or, is there something else going on? Could it be an actual romantic reunion, like some sources and die-hard fans are suggesting/hoping? Here’s everything we know…

We don’t know for certain, but what we do know is that they are enjoying each other’s company again.

On Sunday, June 13 the singer and actor were see kissing at Nobu in Malibu during Lopez’s sister Lynda’s 50th birthday party. In photos and a video obtained by Page Six (which you can see here), the Super Bowl performer and her rumoured boyfriend were seen in a deep embrace without a care for who was watching.

For the night out, Lopez wore her hair back in a ponytail and showed off hoop earrings while at one point Affleck was seen leaning in to whisper something in her ear.

The former couple were first spotted together at the end of April, when Page Six claimed that the Argo actor and director had been seen arriving at Lopez’s LA home, alleging Affleck had visited the star three times since she arrived back in the US after her stint in the Dominican Republic shooting her upcoming film, Shotgun Wedding.

They had also both appeared, albeit separately, at the Global Citizen ‘Vax Live’ charity event, co-chaired by the Duke and Duchess of Sussex on May 9.

A day after the event, the Mail Online published the first pictures of Lopez and Affleck together in seven years. The photographs reportedly show the two actors arriving back in Los Angeles after spending the weekend together in Montana (where photographs of them driving were also obtained). According to E! News, the duo spent a week holidaying in Affleck’s chalet in the US state. The entertainment outlet cited ‘multiple sources’ suggesting that the pair’s friendship has turned up a notch. ‘Ben reached out to her to see how she was doing and they had dinner together a few times within this last month. It’s natural between them and the chemistry is unreal. They picked up where they last left off and are enjoying each other’s company right now,’ reportedly said one source…

On May 31, Page Six published photos of Lopez and Affleck looking very comfortable in each other’s company while heading to dinner at celebrity chef Wolfgang Puck’s new restaurant in Los Angeles.

Affleck was photographed with his arm around his former fiancé, who was seen nestled into his shoulder while also wrapping her arm around him. According to the outlet, Lopez and Affleck then held hands as they made their way into the restaurant.

Are there memes and tweets about Jennifer Lopez and Ben Affleck meeting up again?

But, of course. While it might feel like we’ve been thrown back to the early Noughties again, there are clear indicators that time has progressed. Namely, the advance of the internet and social media, and therefore internet reactions:

i don’t know who needs to hear this, but ben affleck and jennifer lopez hanging out together, is not an excuse to text your ex

Bennifer is a thing again?
I better log into AOL Instant Messenger and tell all my friends

How long were Jennifer Lopez and Ben Affleck together, why did they break up?

But in 2003, their wedding was postponed days before it was scheduled to happen, with the couple confirming their break up in January 2004.

Revisiting a People magazine article from 2003, shortly before their nuptials were due to take place, a statement from the couple said the reason for postponing their Santa Barbara wedding was down to the intense media speculation they were subject to.

‘Due to the excessive media attention surrounding our wedding, we have decided to postpone the date,’ the statement read. ‘When we found ourselves seriously contemplating hiring three separate “decoy brides” at three different locations, we realised that something was awry. We began to feel that the spirit of what should have been the happiest day of our lives could be compromised. We felt what should have been a joyful and sacred day could be spoiled for us, our families and our friends.’ 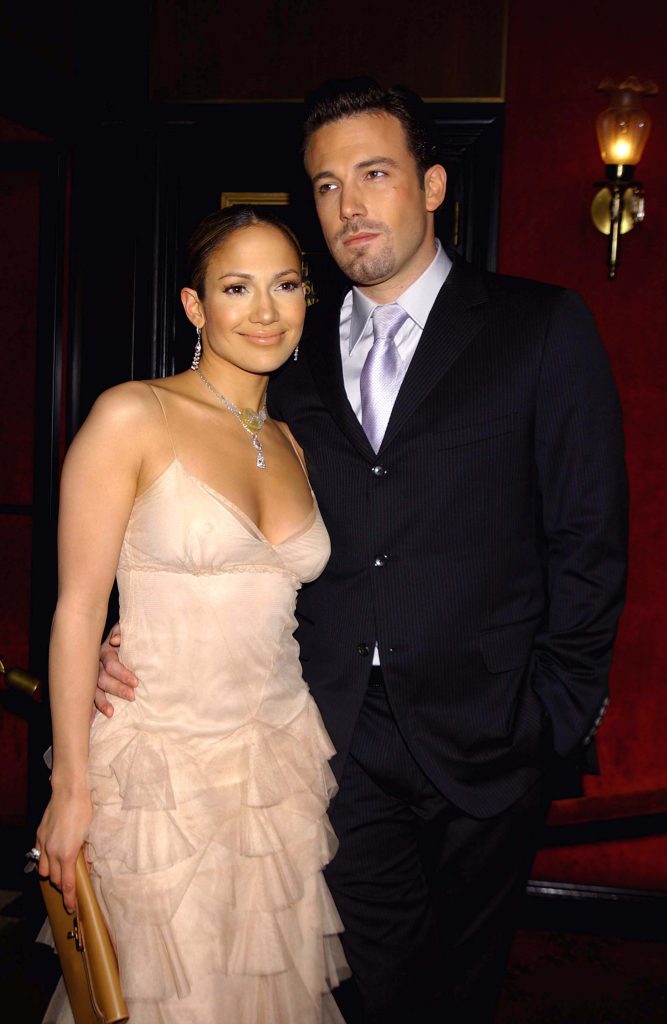 In 2010, while appearing on the Graham Norton Show, Lopez reflected on the immense pressures the media scrutiny put on their relationship.

“It was a lot. Honestly, I’ve never really talked about it before,” she said.

“I love Ben, he’s a great guy but it was a lot for both of us to be under that type of siege for two years straight. We were on the cover of every magazine every week, it was just a weird thing. The media catches on to certain things and that just happened to be one of things and our relationship, I think, did suffer because of that. That wasn’t the only thing.. but it definitely played a part in the dynamic of our relationship.”

What have Jennifer Lopez and Ben Affleck said about each other since their break up?

Both Lopez and Affleck moved on after their break up, with Affleck finding love with Garner, and years later with de Armas. Lopez also welcomed children, twins Emme and Max, with her husband Marc Anthony who she married in the summer of 2004 and separated from in 2014.

Both of the Jersey Girl stars have only had good words to say about each other since their early Noughties split. After Affleck won a Golden Globe (and later an Oscar) for Argo in 2013, Lopez appeared on The Ellen Show where she congratulated her ex.

“They were really hard on us in the press when we dated back in the day and on movies and things like that so it was a nice moment, it was nice to see him have that moment. I was really happy for him,” she said.

Affleck has also continued to praise Lopez, joining the outrage when the 51-year-old was left out of the Oscar nominations after her critically-acclaimed performance in 2019’s Hustlers.

“She’s the real thing. I keep in touch periodically with her and have a lot of respect for her. How awesome is it that she had her biggest hit movie at 50? That’s f***ing baller,” he told the New York Times.

Last year, he also criticized the way Lopez was written about when they dated, telling the Hollywood Reporter’s Awards Chatter podcast: “People were so f***ing mean about her — sexist, racist. Ugly, vicious sh*t was written about her in ways that if you wrote it now you would literally be fired for saying those things you said. Now it’s like, she’s lionized and respected for the work she did, where she came from, what she accomplished — as well she f***ing should be!

“I would say you have a better shot, coming from the Bronx, of ending up as like [Justice Sonia] Sotomayor on the Supreme Court than you do of having Jennifer Lopez’s career and being who she is at 50-years-old today.”

Whatever is happening between the couple, we’re not mad at these mutual levels of respect and apparent growth.