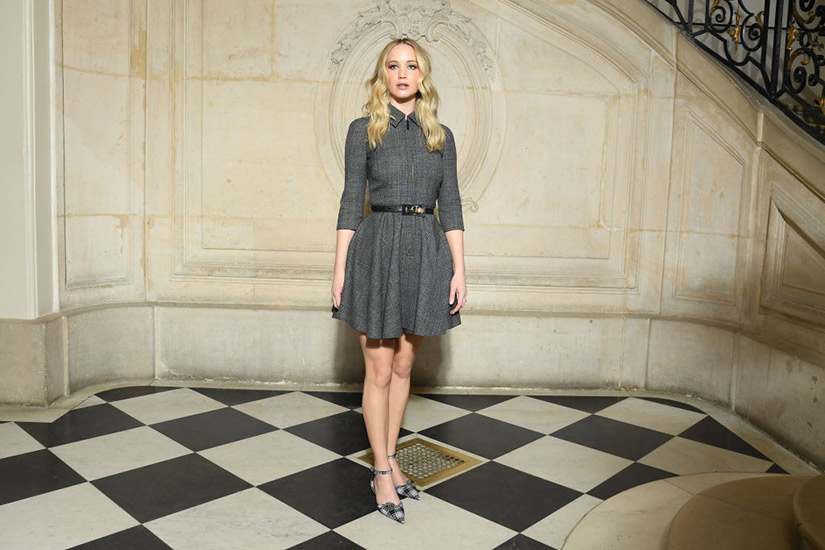 Jennifer Lawrence did her first event today since news of her engagement to Cooke Maroney was confirmed by her publicist earlier this month. And while J.Law has been photographed in her ring multiple times since the proposal, her appearance today marks the first time a high-resolution, crystal-clear shot of the ring has been taken. Previous photos were long distance and grainy.

So what does the ring look like? It’s emerald-shaped and definitely diamond. ELLE.com asked a couple diamond experts to weigh in on its value and carat count. The consensus seems to be it’s roughly four to five carats and worth around $200,000.

Here, what they all said:

President of SuperJeweler.com Andrew Fox gave ELLE.com the lowest carat estimate. “Jennifer’s ring, which is surprisingly modest, appears to be a 3-4 carat emerald shape diamond,” he said. “While I’m certain that it’s of very fine colour and clarity, he [Cooke Maroney] most likely paid over $200,000.”

Gemologist Grant Mobley echoed Fox’s estimate of $200,000 but gave a slightly higher carat count. “The ring appears to be around a 4 to 5 carat emerald cut diamond and set in a classic platinum four prong solitaire mounting with a petit band,” he told ELLE.com. “The beauty of a classic mounting like this is that the centre diamond is the main focus and can get all of the attention. Because there are no other stones or embellishments on the ring at all, you can tell that the natural centre diamond was the most important part of this ring for the couple. A natural centre diamond of that quality and size would be close to $200,000, and because large, natural diamonds are growing increasingly rare, this ring will definitely retain its value over time.”

Kathryn Money, VP of Strategy & Merchandising for Brilliant Earth, also agreed the diamond is at least four carats. “We can confirm that Jennifer’s engagement ring features an estimated 4-5 carat elongated cushion or emerald cut diamond in a white gold or platinum solitaire setting,” Money told ELLE.com. “Depending on the quality and specific characteristics of the centre diamond, we estimate the cost of the ring at approximately $60,000 to $100,000.”