Our one on one interview with Hollywood's brightest star—Jennifer Lawrence. 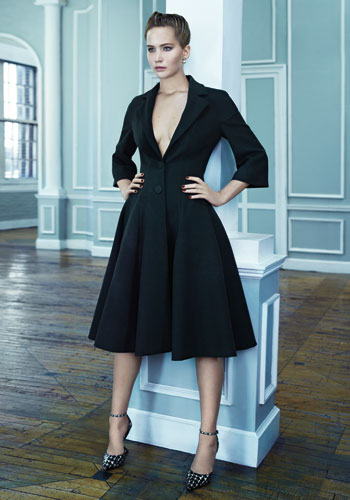 Jennifer Lawrence says she’s made up of "a lot of contradictions." It’s surprising to hear this from the Kentucky-born actress, who has rapidly risen from indie up-and-comer to international sweetheart. (I would call her an A-lister, but the letter doesn’t seem prominent enough.) Few actresses seem as genuine–few people, in fact. Any perceived gaffe she makes (like that stumble…you know the one) seems to present a new opportunity for the Twitterverse to rhapsodize about the 23-year-old’s fresh-faced amicability.

Sure, Lawrence, who stars in this fall’s massive Hunger Games sequel, Catching Fire, and shines as the face of Dior, is a girl you’d like to be friends with. She loves "crappy reality television" and makes "a good meat loaf." But she’s more than that. Lawrence is serious and lets out contemplative sighs more often than I thought she would. She’s learning where she fits into the confusing puzzle of fame and adulthood. The Academy Award winner is in the midst of mind-splitting success yet wants to "take a big break." It’s unlikely that that will happen anytime soon, though.

How was filming Catching Fire?
"I’d assumed I was just going to go back to doing the same character, which is kind of boring, because I’ve always done new characters–a new movie and a new place. But she has changed a lot. It was really interesting."

You’re working on a few more films that are based on books, like Serena and East of Eden. Do you read a lot?
"I do! Books were my first introduction to stories–why I love making movies. Now, I’m reading The Alchemist and I’m in the middle of Keith Richards’ memoir."

That book is crazy but awesome.
"It’s really great! I saw the Rolling Stones in concert when I was in Montreal filming X-Men, and I just love them."

CULTURE: The 20 books you need to read before you die

How was Montreal? That’s where I’m from.
"Oh‚ really? I love Montreal! It’s such a cool city. It’s got a really relaxed vibe. It’s very individual. It’s kind of its own thing. And the restaurants are amazing. My favourite restaurant was probably Barroco in the Old Port."

You mentioned Keith Richards, who has had such a long career. At 23, you’ve already accomplished so much; do you have goals that you’re holding onto for when you’re older?
"I’d like to direct. I’m producing now, and I hope that I can be a good producer. But also just real-life stuff: having a family, [figuring out] where I would live–normal things that every girl thinks about."

So you hope to be a good producer. What does that take?
"I’d read these incredible scripts, and then I’d drive through West Hollywood and see posters for the movies being made and think ‘This is ridiculous.’ As an actor, I find it really frustrating that there’s this horrible habit to reuse people who are recognizable. People are afraid to bring in someone new. There are so many amazing actors out there who never get a chance to be seen because they’re not already famous. So, my goal as a producer is to give new people a chance–give new writers and actors a chance–instead of recycling."

CAREER ADVICE: Land your dream job with these expert tips

Because you got a break early on?
"Yeah. I have friends who are actors and incredibly talented, but they tend to get beat out by the person who is more popular. Somebody took a chance on me."

So how do you measure success? That’s the big question.
"Happiness. I think you can still pity people who have money and cars and houses–you can still see that they’re not happy and not satisfied. We think that those things will make us happy, but that’s the end goal."

Are you happy?
"I am, fortunately."

You live in a glamorous world, though, that includes a partnership with the House of Dior. Has your relationship with fashion changed?
"Yes, because I’d never really been that interested in fashion. I’m like every girl–I want to wear something that looks good, but when it came to red carpets, I was never very opinionated. But if I don’t have an opinion, then somebody else will. So, I decided to start being more vocal about what I like and don’t like. If I have to wear something, I may as well wear something I like!" [Starts to stand and tips over in her heels.]

There have been so many GIFs of you doing hilarious things like that.
"Really? What am I doing?"

They’re just these little candid moments. There are millions of them. The public seems so genuinely charmed by the littlest things you do. Do you feel that in your day-to-day life?
"It sounds so odd because I know how hard people are on actresses. It’s really nice to hear that. No matter what anyone else says, everyone likes to be liked. But I don’t really know what people’s perception of me is because I’m me. I don’t get it."

Which comedy-classic did Jennifer Lawrence turn down a role in? Click next to find out…

People feel they know you. Are you comfortable with that?
"I feel that way too! I met Sandra Bullock and was just like, ‘Oh blah, blah, blah’ and was being really sarcastic. I didn’t realize until I walked away that it was probably rude. Then I was like, ‘Oh, my God, I just did to Sandra Bullock what everybody does to me!’ It’s a very natural part of this."

How would you describe yourself then?
"I’ve got a bit of both my mother and my father. I’m nervous but also blindly confident. I love to laugh. My favourite thing–all I need to be happy–is to laugh. That’s what I love about David O. Russell [director of American Hustle and Silver Linings Playbook] so much. He has this different brand of humour. He’s like a mad scientist. He’s really a brilliant man, like Doc from Back to the Future!"

Are you ever tempted to do straight comedy? You’re so funny.
"Thanks! I’m so mad–I got asked to be in Anchorman 2. It was my dream, and I couldn’t do it. That sucked! I was working."

Maybe they’ll do a third?
"Or a second Old School!"

Are you ever tempted to write?
"I used to be. I’m so tired now that I can’t imagine doing anything other than working and sleeping, but hopefully when my schedule calms down a little bit, I’ll be inclined to–and hopefully it won’t suck. But I guess we’ll see."

What do you do to keep sane when you’re so busy?
My best friend has been with me since The Hunger Games, and she just helps me out. I’m not surrounded by ‘yes’ people. So I feel normal because I’m being treated normally."

Where’s home now?
"My parents live in Kentucky. I don’t actually own a place. I kind of go from movie to movie…. It feels lonely because when I’m working on a movie, I feel like I have a home. But when we wrap a movie, it’s like, ‘Oh, my God, what am I going to do? Where am I going to go?’ So it’ll be nice to have a base. I don’t know where it would be and I don’t know when I would have time, so I just deal with the lonely nomadic feeling. I bring a picture of my family from when they visited me in Hawaii."

So here is a job-interview question: What’s your five-year plan?
"To slow down, which is maybe a weird job-interview answer." [Laughs]

Who does Jennifer Lawrence consider to be "one of the most incredible actresses in the world"? Find out on the next page…

When you’re back in L.A., are you able to walk around?

"I’m often stuck in my house…. It feels like being under house arrest. The thing that sucks is that the more you’re in the tabloids, the more of a celebrity you become and the less of an actor. The more people see your real life, the less they can lose themselves in your characters. The only thing I can do to stay out of the tabloids is not leave my house, which, you know, sucks. Other times, I can wear a hat and ride a bike and by the time someone recognizes me, I’m already gone."

So your strategy is to just be really fast?
"It’s good exercise motivation."

Do you sometimes wish that you could just leave your actor persona behind?
"I wish that all the time. A doctor takes their doctor coat off and goes home. Sometimes I wish I could just shed this…. Go down the street and get my own coffee or go into a restaurant and just sit there. A huge part of my life force as an actor is just people-watching, and I can’t do that anymore. That scares me because if I’m going to start running on memories, then eventually I’m going to run out of the memories I had from before I was famous–about how it felt to just sit in a café and watch people who were just talking and not staring at me."

What are you going to do?
"I honestly don’t know. It worries me…. There is a lot to see in L.A., and my friends are here, but I might have to go somewhere else, because it’s just hectic here."

What makes you mad?
"I never yell at people–well, I yell at my mom. She’s probably the only person in the world I yell at."

Everyone yells at their mom.
"I’m kind of going through this…. [Sighs] I’m angry at some of the fame stuff. Someone can just take a picture of me inside my hotel room and post it [online] and that’s legal, or men can sleep outside my house and follow me everywhere I go and I can’t do anything about it. People feel entitled to so much of my life. I don’t feel like they are entitled to know what I’m doing on the weekend or when I’m walking around with my family. I wasn’t really ever angry before, but I’d be lying if I said that didn’t make me angry."

HEALTH: How to better control your life

You seem so open. I’m surprised that you feel uncomfortable sharing your life.
"When I’m doing press, or doing a red carpet or at an event, that’s my job and I’m happy to be there! It’s when you’re not in a movie and the press is about your personal life against your will–that’s what upsets me."

Who do you admire?
"Meryl Streep is obviously one of the most incredible actresses in the world, but I also admire her on a personal level. I hope that I can aspire to have what she has: a private life that no one knows about."