Brangelina who? The dark days are over. Hollywood's golden girl has got it going on! 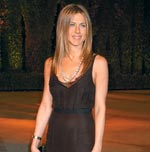 The titles of Jennifer Aniston’s latest movies — Derailed, Rumor Has It… and this summer’s The Break-Up — could have been inspired by the tabloids’ coverage of her split with Brad Pitt. At this year’s Sundance Film Festival premiere of her latest flick, Friends With Money — another example of boldface synchronicity — the beleaguered star was once again in the middle of a media frenzy. This time, the world wanted to know her reaction to the news of the Brangelina baby.

Aniston’s publicist issued a terse “No comment,” but when speaking to the British press, the 37-year-old actress shed some light on how she has coped with what is only the latest development in her ongoing annus horribilis. “You have to just smile at it all, otherwise, you’d go crazy,” she said. “It’s a source of survival, being funny. I can laugh at my darkest moments — I truly can — particularly when no one else would laugh. This past year, I’ve had some dark moments — you may have heard about them — and thank God I know how to use humour to get me through it.”

It was a smiling Aniston who greeted the press a day after the opening-night screening of Friends With Money. Aniston, dressed in jeans, a pink turtleneck and brown boots, and her co-stars Catherine Keener, Joan Cusack and Frances McDormand were there to chat up the film. Written and directed by Nicole Holofcener (Lovely & Amazing), the movie examines the evolving relationship of four women who have been friends all of their adult lives.

With the exception of Aniston’s character — who quit teaching to clean houses — the women are wealthy and accomplished. They are concerned about their friend, who seems unable to make a living or sustain a relationship. Aniston said she welcomed the chance to play a woman who was “a little more real — more offbeat,” much like the character she played in The Good Girl (another Sundance indie hit).

ELLE Canada: Before you became rich and famous, how did you earn a living?

Jennifer Aniston: “I was a waitress for many, many years, and I loved it. I worked at an advertising agency. I was a bike messenger. I was a receptionist. I worked at a skin-care centre and even an ice cream shop!”

EC: What did you love about waitressing?

JA: “I just loved working with people, but I wasn’t a very good waitress. I dropped things, I got orders wrong and I spilled stuff. But most customers were okay with it. Only one time did I have somebody yell at me that I was a stupid American-he wasn’t from our country.”

EC: While you were waiting tables, were you dreaming of becoming an actress?

JA: “Yeah. But I never thought I’d make it. I didn’t really have much confidence that I was going to become an actress one day.”

Still hungry for celebrity gossip? Read our profile on mom-to-be Gwen Stefani!EC: Did the relationships in your life change once you had money?

JA: “No. Most of my friends are still the same. There are some who are no longer my friends, but not because of the money or anything like that. I didn’t change, but people around me did. I think they just felt different around me.”

JA: “Not spooked, but just kind of uncomfortable. Does that make any sense?”

EC: What affects a relationship more — fame or money? How do you handle that?

JA: “I don’t do anything. I just am who I am. It’s not my job to take care of anyone’s discomfort!”

EC: Are some relationships simply doomed?

JA: “No! Well, relationships are doomed if you don’t know who you are, I think, or if you don’t learn from your mistakes.”

EC: Now that you’re a big movie star, do you still lack self-confidence? Can you relate to women’s insecurities about their looks and weight?

JA: “Oh, no, I have all the confidence in the world!” [Laughs] “Well, of course I can relate! You don’t hit some level and are just like, ‘Ooh, I can coast.’ I take care of myself; that’s first and foremost. There are times when I don’t take as good care of myself and times when I do. But it just feels good to be healthy.”

EC: In Friends With Money, your character, Olivia, is not leading such a healthy, balanced life. Why did you want to play her?

JA: “Well, I think that’s how I actually see myself sometimes. Quite honestly. It’s just part of me; it’s absolutely a part of me. I’ve come from there. I’ve had moments of insecurity in my life. I’ve had moments of low self-esteem. I think it’s something that’s universal for us all. Just because you have been given this sort of image, it doesn’t necessarily mean it’s who you are or what you believe. There are so many parts to all of us. There’s a part of me that relates to Olivia. Getting the chance to play a character like her lets me be seen in a different light. You have more freedom as an actor to just shed your baggage and act. Very few people can see past your image and say ‘I trust you as an actor and I know that there’s more there.’ Thank God for her [director Nicole Holofcener] for giving me this chance. It would be awful to be stuck on a shelf in the Fruity Pebbles section, you know.”

EC: As you get older, do you get more confident?

JA: “I think you definitely find peace within yourself. Don’t we all get to the place where it’s just ‘Ugh!’? Like Shirley MacLaine: God, I wish we could get where she is right now. She’s just like, ‘Oh, f*&% it!’”