The X-Men: Interview with Shawn Ashmore

He plays a mutant like nobody else! ELLE sits down with one of the film's most amiable characters. 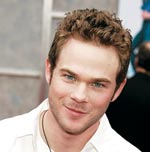 Movie franchises don’t get much bigger than X-Men, but the series’ MVP may turn out to be a supporting one. Not only did B.C. native Shawn Ashmore hold his own with an all-star cast in 2003’s box-office-busting X2: X-Men United but his character, the gifted but confused teenager Bobby Drake (whose ability to freeze everything he touches earns him the moniker of “Iceman”), was the film’s emotional centre. The scene where Bobby “comes out” as a mutant to his parents was an oasis of tender human drama amid big-budget pyrotechnics.

Ashmore reprises his role in this month’s highly anticipated X3, which bears the rather disconcerting subtitle of The Last Stand. The title has increased speculation that this will be the final film in the series, but Ashmore says he’s in no position to confirm or deny anything. He is, however, willing to dispel rumours that X3 director Brett Ratner (who stepped in after original helmer Bryan Singer signed on to direct the summer’s other big superhero flick, Superman Returns) was difficult to work with. “It’s good to work with someone you’re used to, but, that being said, having a new director with new ideas can open up new paths for the story and characters.”

The 26-year-old Ashmore is understandably hesitant to trace those new paths in too much detail. “I don’t want to give anything away,” he says, but he does imply that Bobby’s role has been beefed up and that he gets to show off his sub-zero mastery again. He’s more excited, however, by the sequel’s continuation of the philosophical issues of the X-Men universe. “[The film] deals with the question of being given a choice,” says Ashmore. “If you could ‘cure’ yourself or others, would you? Whose decision is that? Do mutants need a cure? It’s a very complicated issue.”