Playing a gymnast was a real stretch for Missy Peregrym. 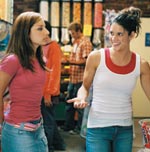 Missy Peregrym had a body double for her first feature-film role as a gymnast in Stick It, but the Surrey, B.C., native still had to train for four months, five days a week, six hours a day, before she hit the set in L.A. And we’re not talking mere headstands. Peregrym was put through the paces — from aerial tumbling and floor exercises to the balance beam and parallel bars.

“I was sore every day,” she recalls. “Gymnasts make it look so easy, but it actually strains every part of your body — I even ended up with strong toes!” Stick It, which is described as Mean Girls meets Bring It On, is the story of a rebellious girl (Peregrym) who gets into trouble with the law after her parents get divorced. For her punishment, a judge sends the former gymnast to a top-notch gymnastics academy. Although she dreads returning to this uptight, regimented scene, her coach (Jeff Bridges) reignites her passion for gymnastics and her belief in herself.

Peregrym’s archrival in the film is fellow Canuck Vanessa Lengies. “I don’t know what I would have done without Vanessa,” she says. “In those difficult moments — when the training was killing me or when I was missing home — she was the perfect support.” The movie is “raw and real with elements of comedy and goofiness,” adds Peregrym, best known for her role as Jackie on the short-lived TV series Life As We Know It (opposite heavy metal’s most famous daughter, Kelly Osbourne).

Peregrym, the daughter of a minister and motivational speaker and an accountant mother, may appear in revealing halters and tight shorts in the film, but she says the movie isn’t about raging hormones and unrequited affection. “It’s not about a girl winning the love of a guy. Stick It is about facing your fears and transforming obstacles into victories.” Although the 23-year-old actress says she benefited physically and emotionally from this part, it didn’t inspire her to take up acrobatics in her spare time. “Once filming stopped, so did I. But at random moments, I do get the urge to do a handstand. So wherever I am I do it, just to be sure I still can!” Stick It opens April 21.