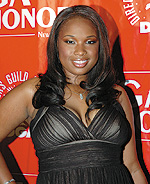 Imagine this: A struggling singer dreaming of stardom quits her job as a cruise-ship performer and heads to Atlanta for the chance to audition for American Idol 3. Some 70,000 contestants later — armed with an astonishing six-octave range, a spot in the top 12 and the attention of Sir Elton John, Barry Manilow and Quincy Jones — the dream looms large. Then, in a shocking upset that leaves viewers incensed, the hopeful is voted out but vows to return, as fallen Idols often do. For most, this is where dreams end. But for Jennifer Hudson, it’s where her story begins.

Rising starlette
Hudson won a starring role in the film Dreamgirls, alongside Jamie Foxx, Beyoncé Knowles and Eddie Murphy, in a search that drew comparisons to the hunt for Scarlett O’Hara. Yet for the 25-year-old Chicago newcomer who beat out 782 candidates-including Idol 3 winner Fantasia Barrino-playing Effie White (the unfairly ousted lead singer of an all-girl group who eventually prevails as a solo artist) was the ultimate “I told you so” and nothing short of destiny. “A little voice told me I’d get it. Two weeks later, I had the role. I never doubted it, because I am a true ‘dreamgirl,’” says Hudson with a laugh.

Providence aside, it was Hudson’s longtime boyfriend, a Chicago janitor, who proved invaluable at audition time. “He was a great coach. The things he told me were things my acting teacher and the director ended up saying! He watches a lot of films, but he’s happy earning a regular living and leaving the dreams to me.”
One dream she didn’t expect was the reaction she got from Halle Berry at Cannes. “I was gonna scream, but she beat me to it, hollering ‘I’m so proud of you. Congratulations!’ It blew my mind.”