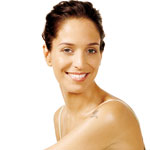 Since her debut album, Under These Rocks and Stones, in 1997, Chantal Kreviazuk has carefully crafted an enviable career not only as a singer but also as a songwriterfor the likes of Gwen Stefani and Avril Lavigne. The multi-tasking artist also appeared in the Toronto production of The Vagina Monologues and has been on fact-finding missions in the Middle East for War Child Canada.

This spring, the 33-year-old chanteuse wrapped up the tour for her fourth album, Ghost Stories, and is now looking forward to spending more time with her husband and music collaborator, Raine Maida (front man for Our Lady Peace), and their two young boys. When ELLE last chatted with Kreviazuk, she had just been named the first Canadian spokesmodel for Garnier Nutrisse Cream. When asked to reflect on her success, Kreviazuk responded: “I read an article that completely confirmed my understanding of achievement. It said: ‘Achievement lasts for a second. The fire is in the journey.’ I believe that. No, I live it.” We caught up with Kreviazuk again to see how that journey is unfolding.

On being a role model…

How important is it for you to be a source of inspiration and to be taken seriously?
“If you’re serious all the time, I don’t know that people will pay more attention to you, but I think it’s important that all possibilities are flirted with in life. When my husband and I are maxed out by everything that’s going on in our lives, we look at each other and say ‘We’ll never be able to complain that we haven’t lived.’”

On love and motherhood…

You met your husband, Raine, at a rock concert; what caught his eye?
“He says it was the jeans I was wearing!”

You worked together on your latest album, Ghost Stories. What was that like?
“He’s not going to blow smoke up my butt, so I have to rise to the occasion. He’s always telling me that I should stay true to myself — that I shouldn’t worry about what other people think because it’s impossible to please everybody.”

What do you want your children to learn from you?
“I want to be able to discuss everything that’s going on in the world with them. They are the generation that will be taking over this place, so it’s important to me that they are well read and have opinions about what should or shouldn’t be.”

Can you offer any makeup advice?
“I think that as we age, we should wear less makeup. I still love smoky eyes for shows because it’s a dramatic, artistic look, but offstage, less is more.”

What’s your beauty routine?
“I have to have Kiehl’s Lip Balm, Lancôme’s tinted moisturizer and my eyelash curler from Shu Uemura. I also really love the Garnier Nutrisse Cream conditioner that comes with the hair colour because it makes my hair soft and shiny.”

You’re in great shape. Do you work at it?
“I love being active. My husband and I run together, and I swim and do yoga, but I go through periods where I won’t work out for a couple of weeks. When I pick up a magazine and read how people are so religious about their investments, their wardrobe or their workout regimen, I think ‘That’s so not me!’”

Who are your favourite fashion designers?
“I really love Chanel, Costume National and Stella McCartney. I love fashion, but I don’t have 10 pairs of black tuxedo pants or 500 pairs of shoes.”

You wear a lot of black; is that a statement?
“It’s a humility thing. I feel like I’m insulting somebody somewhere if I’m flamboyant or haughty in any way, shape or form. When I wear black, I feel that somehow I’m being respectful.”

Who’s your style icon?
“Katharine Hepburn. I don’t like trendy fashion that much; I think it’s a bit frivolous to spent money on something that will be obsolete in a few months. When I buy clothes, I usually choose pieces I could wear again in five years.”

On celebrity and the L.A. lifestyle…

Do you think that too many artists are more concerned with the idea of celebrity than with using their art as a platform to inspire others?
“Perhaps. Maybe it’s a compensation thing. Maybe when an artist doesn’t have a lot of confidence, he or she can only handle the celebrity part.”

Do you think that a heightened celebrity status can shorten or damage a serious music career?
“If you fall for the hype, you are buying into a whole list of delusions about yourself; to me, that’s very sad.”

You spend half your time in L.A. Do you choose to separate yourself from the Hollywood lifestyle?
“I feel really lucky that I met my husband, because I would hate to be somebody who is still trying to date or find somebody in that city — that would be really hard. I feel so blessed to have been found.”

What’s the best career advice you’ve ever received?
“Believe it or not, it’s probably every time someone tells me to let my business people or managers handle that part of my life and that I should just focus on being an artist.”

What else would you like to accomplish musically?
“I’m super-pumped to continue working with Raine. I want to continue to improve upon what we’ve touched on; I want to make more and more great music together.”

What’s the best part of your job?
“The freedom to think about things that I might not think about if I weren’t a musician. I have to challenge myself to grow in order to produce — in order to deliver new ideas and emotions in my music. That is such a gift. That really does make me feel very fortunate.”