Hilary Swank on beauty, power and her newly single life. 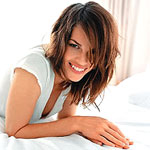 Seated in a restaurant in Paris, Hilary Swank is studying the menu. She would like salmon but not smoked — they don’t have any more. Swordfish? She’s allergic. Meat? She never eats meat. In the end, she settles for an egg-white omelette. In a gust of laughter, she says, “The waitress is probably thinking to herself, ‘Another crazy American.’” Swank’s story is the classic rags-to-riches story. From living in a trailer park to winning two Oscars, her life is full of extremes. After a tumultuous year that included the breakup of her marriage, the 32-year-old says she is living her dream.

ELLE Canada: With your Oscar wins, red-carpet appearances and newly single status, the paparazzi are all over you. How do you cope?

Hilary Swank: There are side effects in this business, and one of them is that people want to talk to you. From my point of view, if I ran into an actor I admired, I’d want to speak to him too. I have to constantly remind myself — especially when I get to that place where I’m tired and I just want to get a coffee and be alone — that I’m in a really blessed position. If I were a struggling actor, I’d say ‘I’ll take that.’ I always have to remember where I came from.

EC: Physically, you’re not a Hollywood stereotype. Did this cause setbacks for you at the beginning?

HS: Of course. I can’t tell you how many times I heard casting directors say right to my face that I wasn’t pretty enough to play the role of the girlfriend in a cheesy TV movie of the week. The hardest part was that I needed the work. Women don’t come up to me on the street and say “Oh, my God, you’re so beautiful!” but they do come up and say “You made yourself out of nothing, and you made me believe that I can do it too.” That’s beauty.

EC: You are now the poster girl for the fragrance Insolence. Are you insolent?

HS: I suppose I am tenacious more than anything else. Every time a producer told me I had no talent, I refused to give up — I just worked harder. Throughout my childhood, my mother used to tell me, over and over again, that as long as you believe in yourself, you can get everything you want out of life. I’m also quite silly, so my family thinks it’s hilarious that my Oscars are for dramatic acting.

Which celebrity do you think has the hottest style? Tell us in our forums!

Photography by Sylvie Lancrenon EC: In the ad campaign for Insolence, you appear naked, in a really sexy pose. Is this a deliberate effort to change your “boyish” image?

HS: I know that people don’t think of me as sexy; they associate me with the characters that I played in Boys Don’t Cry and Million Dollar Baby. In fact, the Guerlain campaign has given me an opportunity to come out of my shell, to be different in an unexpected way and to put my feminine side on display.

EC: What do you think about the Botox craze in Hollywood?

HS: In 10 years, I might change my mind [laughs], but today I think that Botox is just a fad — pretty much like epaulettes were in the ’80s. You can change your wardrobe as often as you like, but plastic surgery lasts forever. The worst will be in a few years, when everyone says “What the hell did all these women do to their faces?” I think it’s very dangerous to follow a fashion trend that affects your body — especially for actresses. How can you express a feeling with a smile or grimace if your skin is so taut that you’re incapable of any expression whatsoever?

EC: Why did you choose New York as your home base?

HS: It’s only a six-hour flight to Europe! It’s also a blender of cultures, so for the job that I do, the human experience is very important. In L.A., you are constantly segregated. I don’t know how you can continue to tell stories that way.

EC: Now that you’re the toast of Hollywood, how do you stay so grounded?

HS: There are things in this business — in any business — that you can choose to be part of. I love my job and going to work. I’m surrounded by people who are the great side of this business. That other part you hear about — that’s just not part of my world.

EC: I know you’re very attached to your animals. Don’t you miss them when you travel?

HS: Yes! I’m lucky that I get to travel with my animals. I have two dogs, two birds and a rabbit. The studios I work for are respectful of that and know how important my animals are to me. Of course, when I do press, I can’t take them with me. And when I was in India, I couldn’t bring them.

Photography by Sylvie Lancrenon EC: Why did you decide to go to India?

HS: It has always been a country I’ve wanted to visit, and I also wanted to do charity work. I spent a month in India, sleeping on a wooden pallet and living without hot water. In the mornings, I taught kids English; in the afternoons, I worked at an orphanage. It was incredible.

EC: Did this trip to India help you get over your recent breakup with Chad Lowe?

HS: I needed to leave — to empty out. After 13 years together, Chad and I still have a pretty good relationship. We’re still good friends, but, you know, I met him when I was young — I was just 18. I left my mother to live with him. For the first time in my life, I’m alone. For me, the trip to India was a way to find out what I wanted again.

EC: Did the trip meet your expectations?

HS: Like anything in life, some things were richer than I expected and some weren’t. For example, I pictured that I would do yoga every morning, but I didn’t do it once!

EC: What are some of your observations of women’s lives there?

HS: Unfortunately, the country is having a hard time letting go of certain ideas about women. Some of the laws that are intended to protect women are actually unfair to them. For example, wedding dowries are given by girls’ parents, but the financial burden can be too great for poor families. Many baby girls are killed to avoid the economic ruin this would create for their families. In some villages, this practice causes an imbalance of men to women, so you see a lot of rapes. Also, when a husband dies, his widow — even if she’s 15 years old — can’t remarry. She’s sent to a special home for widows.”

EC: Your job requires you to be ‘up’ all the time for public appearances. How do you do that when you’re not in the mood?

HS: I try to let go of whatever is bothering me. The first thing you learn as an actor is to step out of your own life and into a character’s.

EC: What’s the best beauty advice you ever got?

HS: I know it’s a cliché, but beauty really does come from within. If you’re not happy, it shows — and there’s nothing you can do about it.”

EC: Is fashion important to you?

HS: Before going to Los Angeles, I never looked at a fashion magazine. Then, after my first Oscar, couture houses started calling me up and saying “Hilary, we would love to send you some of our clothes.” I would say “Me? Really? No problem!” Since then, I’ve discovered Fendi, Balenciaga and Marc Jacobs — I love them all. But I’m really not a snob. If I see a nice dress in a mall, I’ll buy it. Just so you know, I’m a sucker for a great pair of shoes.

EC: Is it true that you have more shoes than Sarah Jessica Parker?

HS: You’ll have to ask her, but it seems totally possible to me!

EC: You will be onscreen again this month in Brian De Palma’s The Black Dahlia. What role do you play?

HS: I play Madeleine, the femme fatale. It’s my first really sexy role. So we’ll see whether I’m believable or whether it stinks!

Get the scoop here for fashion shows and shopping sprees in your area, all courtesy of ELLE Canada!