The 51-year-old wore two custom made wedding dresses by Vera Wang for her Oklahoma wedding to country singer Blake Shelton. 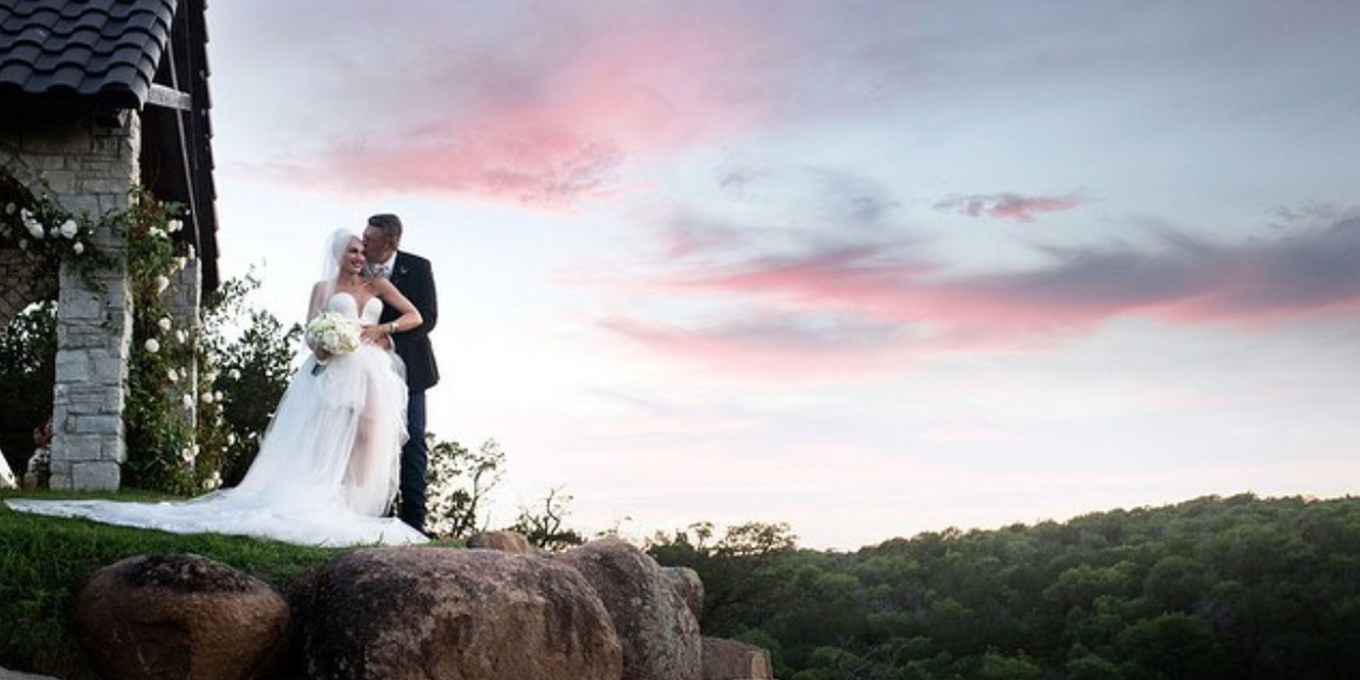 Gwen Stefani has confirmed her marriage to Blake Shelton by sharing several photos of her custom Vera Wang wedding dresses and ranch-appropriate footwear.

On Monday the 51-year-old singer took to Instagram to share a video of herself in a white floral-embroidered veil with a bow, red lipstick and dressed in a white satin robe. ‘July 3rd 2021,’ she caption the clip, confirming rumours the pair tied the knot on Sunday.

The mother-of-three later shared several more photos from her Oklahoma wedding to Shelton, including one of herself dressed in a sweetheart Vera Wang gown with a fitted bodice and a floor-length tulle skirt.

In a similar vein to Hailey Bieber’s Virgil Abloh veil, which featured the phrase ‘Til Death Do Us Part’ for her 2019 nuptials, Stefani’s chapel-length veil was embroidered with her first name, in addition to her husband’s and her three sons’: Kingston James McGregor, 15, Zuma Nesta Rock, 12, and Apollo Bowie Flynn, seven. 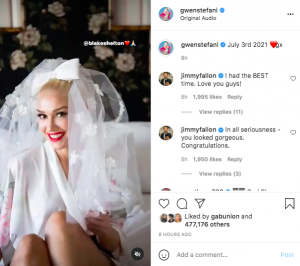 Following the ceremony, which took place in a purpose built outdoor chapel at Shelton’s ranch, Stefani changed into a shorter Wang design, which featured two embroidered love birds, and gathered silk and sequinned fabric at the waist.

The bride styled the reception look with gold bracelets, a cross necklace and a pair of white Le Silla stiletto boots.

Stylist Rob Zangardi later took to Instagram to share a black and white photo of the embroidered veil and reception look.

Stefani also gave her fans a sneak peek of the reception by sharing photos on her Instagram Stories, including a black and white photo of her and Shelton dancing. 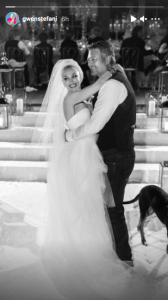 The couple’s wedding photographer, Jeremy Bustos, also shared his thanks at being given the ‘greatest honour’ (of being asked to shoot the special day).

‘I had the greatest honour of spend the weekend with the sweetest, most down-to-Earth, and straight up best-est couple, ever,’ he wrote in a message on his Instagram Stories.

‘G + B, thank you for not only trusting me to capture your most important day…but for your genuine hospitality and kindness. [sic]’ 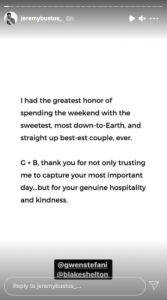 In May, Shelton told USA Today that the wedding planning had largely fell to his then-wife-to-be, who was ‘having a blast’ organising every last detail.

The newlyweds met in 2015 when they worked together as judges on The Voice in the US and confirmed their engagement in October 2020.