Greta Gerwig on being a secret genius and her new film, "Mistress America"

Chatting with the quirky actress / writer over queso. 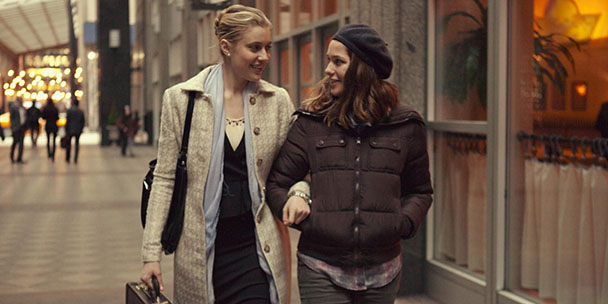 In her new film, Mistress America, indie quadruple threat (she acts! she writes screenplays! she directs! she produces!) Greta Gerwig plays Brooke, the older step-sister of a college freshman named Tracey, played by Lola Kirke. Gerwig’s character is a sort of serial entrepreneur—part-time spin instructor, fashion designer, singer, and now, would be proprietor of a restaurant called “Mom’s”—who ends up “inspiring” her step-sister to write a short story called “Mistress America”, which since it is a fairly sharply drawn lampoon of Brooke, isn’t exactly the best thing for their relationship.

We chatted with the 32 year-old Gerwig, who co-wrote the film with Noah Baumbach, about confidence, character building and queso (which she was eating while we spoke over the phone).

Q: I thought it was a really funny movie, but I also left the theatre feeling a little sad.

A: You’re supposed to feel sad! It supposed to be melancholy in a way. It’s definitely a comedy, but I think all the movies that Noah [Baumbach] and I loved, that we were talking about as influences for this movie, do have this sadness underneath it that isn’t quite definable, and we talked a lot about Shampoo – it’s really funny, but there’s a darkness to it. Same with the secrewball comedies—they’re beautiful and funny, but also there’s an ache underneath. The last line of this movie is Tracey reading a line of her story and saying “being a beacon of hope to people is a lonely business” and that’s a sad but poignant thing to end on.

Q: A line that really stuck out to me was at the very end where Tracey talks about she secretly thinks she’s a genius, that she’s actually better at everything than everyone…
A: “And if I could just figure out my look then I’d be the most beautiful woman in the world!” I love that. I wrote that stuff for Tracey to say.Tracey sort of presents in the beginning as a bit shy, and insecure and lonely, and not totally certain of her place in the world. But actually underneath, she’s got a lot of ambition and confidence, and I think sometimes people try to make characters endearing to an audience by their humility, and there was something that I loved about an 18 year old girl saying “Maybe I’m just really awesome?”. I felt like I never see those kinds of characters who say those things, and I like that underneath sense of “Maybe I’m just really great!”.

Q: With the character that you play, I loathed her and loved her and hated her all at once.
A: It was hard to play. It’s not really like me. I had to really find a different way of being in the world. I find her infuriating but heartbreaking, and I really feel for her in her journey. I think she’s a lot and she’s so performative, and over the top and always putting on a show for everyone, but it’s hiding this real sadness and insecurity and not knowing how she’s going to hack it. There’s something about that that I love and I also hurt for. She’s so into self-promotion, but I’ve always found that the ways she does it is so inelegant. She’s the kind of person who would say “I’m going to that party because it’s really good for networking”, as if that’s a different thing than just socializing. But I’ve always found those people more touching than people who are deft at things like that, people who are baldly self promotional that people who are good at covering their tracks and making it seem like they aren’t doing it. I just love that she can’t really sell it the way she wants to.

Q: This is a dark comedy—literally! The sun never seemed to shine in this movie. It was always overcast. Was that just the weather when you were filming, or was that intentional?
A: It was a combination. It takes place in fall, so we wanted that greyness of fall just before winter comes. In Times Square where there’s all that electric light, and LED and neon shining out of the greyness felt like it matched the feeling of the movie. We also shot alot in mid town Manhattan, which doesn’t really get a lot of screen time in Hollywood!

Mistress America is in theatres August 14.

Melissa McCarthy on why fashion should be fun for everyone

5 things to know about The Man from U.N.C.L.E star Alicia Vikander