Get ready to be obsessed with Olivia Cooke

We loved what the star of Me and Earl and the Dying Girl has to say about social media and Hollywood's crazy double standards. 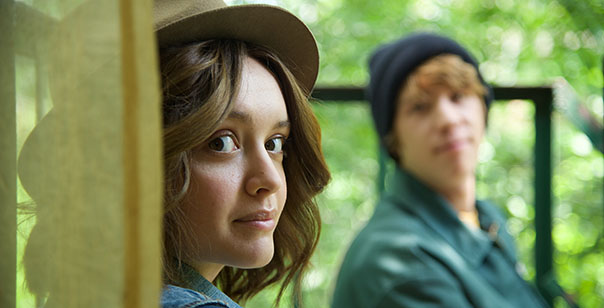 The basic premise of Me and Earl and the Dying Girl (a teenage misfit ends up befriending a girl just diagnosed with cancer in their final year of high school) doesn’t begin to do justice to this surprising, uplifting film. To call it “quirky” also feels a little weak, because this film, while wonderfully offbeat and laugh-out-loud hilarious, is also a genuinely wise, wisely genuine piece of cinema that is anything but twee, and pretty much the opposite of a film like, say, A Walk to Remember, or that movie about faults and stars that shall not be named. No spoilers, but let’s just say there’s a reason this little indie was the darling of Sundance 2015.

One of the stand-out lights of the movie is 21 year-old Olivia Cooke, the British actress Bates Motel fans will recognise from her role as Norman’s pal Emma, and horror fans will know from the string of scary movies she’s been in (Ouija, The Quiet Ones).  ELLE recently had a chance to chat with the direct, refreshing Cooke about “cancer movies”, teenage friendships, and why you’ll never catch her on Instagram.

I walked out of the theatre after seeing Me and Earl and the Dying Girl in a really great mood, which doesn’t usually happen after a movie about a teen with cancer.

OC: It’s more a celebration of life, and it’s so humorous. I found the film really reassuring – like, don’t bother fearing the inevitable. You’ll leave all the pieces behind and you won’t be forgotten.

Did making the film make you think a lot about your own mortality?

OC: Definitely. It’s something I was actually struggling with before the film. I was 18 when I moved to a totally different country, and I was panicking all the time, like “What’s happening to my mom? Is she okay? What if something happens to her and I can’t get there on time? Or what if something happens to me?” I was having these daydreams about what would happen at my own funeral, and just those sort of weird things you sometimes think when you’re feeling really selfish and on a downer. Making this film just made me feel more at ease about just living life, and celebrating life – we’re so lucky to be here, you know? And it sounds so cliché and like “grateful! blessed!”, but this film taught me that there’s just so much time wasted feeling sorry for yourself.

OC: She is fucking pissed at what is happening to her! She’s so young, she’s got so much to experience and it fucking sucks. She loses her hair, she feels so ugly, and the way people are treating her is fucking awful. I didn’t want to play a character with an illness as a tragic victim.

A lovely twist in the movie is that it starts with the male character, Greg, thinking his mission is to “cheer up the girl with cancer”, and yet in the end, it’s your character Rachel who’s been working on Greg all along.

OC: Greg is her little project – she wants him to realize his own self-worth, and in return, he really does provide some comic relief in her life. It’s a movie of self-discovery, really. Greg still has a long way to go, but she opens him up and lets him appreciate relationships more, which he’s never done because he keeps everyone at arms length.

[SPOIILER ALERT] I also love that they don’t ever get together romantically.

It’s so refreshing to see a movie about two teenagers of the opposite sex who are actually, like, friends.

OC: I know – like, what the fuck? That’s Hollywood, though. But this film is not cancer with lip gloss on. It’s not someone helping someone out or sharing something because they want to get laid. It’s about two people who have this strong, platonic, simple love for each other. They are in love with each other, just not in a romantic way. I had so many guy friends growing up that are still my friends. Hollywood seems to feel that this is very foreign and doesn’t happen. Like, it’s impossible that there isn’t this bubbling sexual tension!

OC: It’s really offensive to teenagers! As if that’s the only reason they’ll do stuff  is because they want to get a really good snog out of it in the end. What I loved as well is that these characters aren’t cliché in the slightest. My character’s isn’t “beautiful and she doesn’t know it, all the boys love her and she’s got her head in Jane Eyre” or something stupid like that. It’s a breath of fresh air. You do read a lot of that, especially at my age.

OC: I relate to her in that when I was in school, I was always told, “oh, you’re an old soul”, and I’m 21, and I feel like I am. I feel that about Rachel as well – in her head, she’s moved on from high school already and she’s onto the next thing. Also, she likes herself! She’s not terribly insecure.

Again, not like your usual “secretly beautiful but so unsure of herself “ 20 year old heroine…

OC: No! She’s happy and she’s got self-love and self-worth, and she doesn’t need anyone to affirm that for her. That’s healthy! Teenage girls should grow up thinking that, and not the opposite. I love how comfortable she is with herself. I also love that she keeps some things private, and doesn’t offer herself up to everyone. Which is good, because I feel that people are very quick to spill out private things or dirty laundry these days.

OC: She’s very creative with arts and crafts, which is something that’s totally beyond me!

She and Greg are both very creative people! Which again is refreshing, and nice to see a portrayal of teens that isn’t them just sitting around.

OC: To be able to share that creativity with someone is beautiful, and that’s something I really take from the movie. Like, get out of your phones, connect with somebody, and get out of cyber talking to someone when you could be having a real life conversation. I feel like the art of conversation is dying. I see my sister who is 15 taking selfies – I fucking hate that word! She’s obsessed with herself and contouring, and it’s ridiculous. She’s looks like she’s about 25. It’s so scary.

There actually wasn’t a whole lot of social media in the movie at all, and I remember thinking that was interesting, because a lot of teenagers’ world seems to revolve around that now.

OC: The Internet is not that great. I hope it dies! To be constantly checking your phone to see what’s been updated is boring. You can see the same picture a thousand times on Instagram, whether it’s clouds, or palm trees, or like “holiday in Punta Cana”. Go and see it yourself! But yeah – in the movie, there’s some texting, but it’s minor. Social media doesn’t really come into it, which is refreshing. I get scripts where someone literally says “hashtag grateful”, and I’m like “I’m not doing the movie because of that”.

Do you feel any pressure to do that though? Like building your brand online?

OC: I don’t want a brand online! I’m an actress, not a model or a personality. Literally all I can do is act. If it gets to the point where I’m not getting jobs because I don’t have a million followers on Twitter, then I’ll quit acting because that will be a really sad day. Like if I’m not getting jobs because I can act but because of who can get the most bums on seats, or who can make us the most money – that would be really upsetting.

READ MORE: Which of these things did Marilyn Monroe actually say?

It’s terrifying because I think we’re almost at that point.

OC: Oh my God. That really grosses me out actually. It bums me out. I don’t know if people are going to allow me to stay as an actress when I hit my 30’s or 40’s, or if they’re going to cast me out as a love interest because I’ve had a baby, and so men won’t see me as desirable because of that. But you know, a man who’s had kids is now more desirable now because he’s a “steady Eddie”. It’s such a double standard! But I think it’ll get better. I hope.

What are you going to do to make it better?

OC: I’m just going to try to be as unashamed of my body and my face and my acting as possible. I just did a movie where I was naked for part of it, and there was a scene where we took a break for lunch in the middle of filming it. I went and had a burger, and I was so bloated. The director was like “Olivia! You’ve ruined continuity!” But I was like, whatever! I want to be secure in the way I look and act. That’s something that Molly Shannon, who plays my mom in the movie, showed me as well. She doesn’t give a shit about what she looks like, and it’s so much more believable, and a joy to watch. So even though I am self-conscious, when I’m playing a role, I’m not…and I hope I can still say that in years to come.

Me and Earl and the Dying Girl is in theatres June 12.

READ MORE:
True or false: Marilyn Monroe edition
Why Bryce Dallas Howard came back to Hollywood
Why Taylor Schilling is not a fan of social media