Front and centre with the amazing Ellie Kemper

This comedic actress is ready to take the lead. 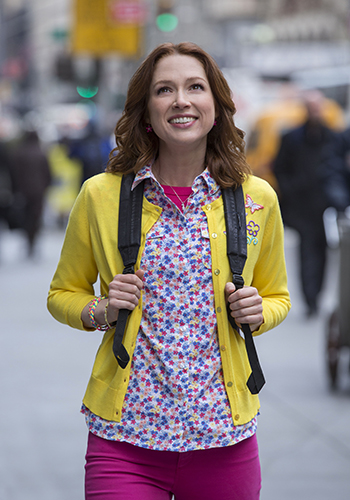 When Tina Fey was creating her new comedy, Unbreakable Kimmy Schmidt, she did it with one actress in mind: Ellie Kemper. The Netflix show stars Kemper, of The Office and Bridesmaids fame, as a relentlessly optimistic woman who escapes a sub­terranean doomsday cult—and then has to figure out how to survive in New York City after living underground for years. (Kimmy’s first mistake? Going to work as a nanny for a Manhattan trophy wife played by 30 Rock alum Jane Krakowski.)

Fey’s faith in Kemper has already paid off: The series was renewed for a second season well before its premiere this month. Over the phone, the 34-year-old Missouri native talks about life in the spotlight, working with Fey and what it’s like being the most adorable woman in Hollywood.

In nearly every profile or interview written about you, the word “adorable” comes up. How do you feel about that particular label?
“I think it’s a little odd to refer to a 34-year-old woman as adorable, because I feel like that’s a term used for babies, puppies and, in general, people who are younger. It’s not a rude term, but….”

It’s a bit patronizing?
“I think that you don’t ne­cessarily refer to powerful people as adorable, right? So I’ll say that.”

READ MORE:  Behind the scenes with breakout star Bella Thorne

I love how every episode has a nugget of wisdom. Often these arrive in little sayings offered by Kimmy, like “You can do anything for 10 seconds.” Do you live by any words or sayings?
“I’m really into SoulCycle. When you’re in an intense interval, they’ll say ‘You’re still up, you’re still up.’ I actually repeat that to myself when I’m having a hard day. I’m literally blushing as I tell you this, but I think that ‘taking it 10 seconds at a time’ is deeply profound. You just have to wait for something to pass, and it always does.”

You’ve talked a lot about how great it is to work with Tina Fey. So what we really want to know is…what’s the worst part about working with her?
“The worst part is probably the best part. Whenever I’m feeling tired, I’ll see her on-set and I’ll be like ‘Oh, this woman has a much heavier workload than any of us and she’s always smiling.’ It’s very inspiring.”

Is there any intimidation factor there?
“Yeah, she’s this cultural icon. I was so nervous around her at first. Luckily, she is so grounded and personable that you stop being nervous. Also, we spent so much time together that I just feel like your system would blow a circuit if you were that tense the whole time. Your body would eventually give in.”

How has it been to headline your own show? Are you feeling any pressure?
“I am, although I hope to keep it all in perspective. I’m not working in a coal mine or flying bomber planes; I’m working on a television show. Definitely there is more pressure—but on a scale of tough jobs, this is not a hard one.”

READ MORE:
Our April cover star, Phoebe Tonkin
BTS on our shoot with Bella Thorne
Why it’s pretty great to be Kate Bosworth