Felicity Jones stars as the fierce, ambitious Jane Hawking in The Theory of Everything, showing at the Whistler Film Festival. 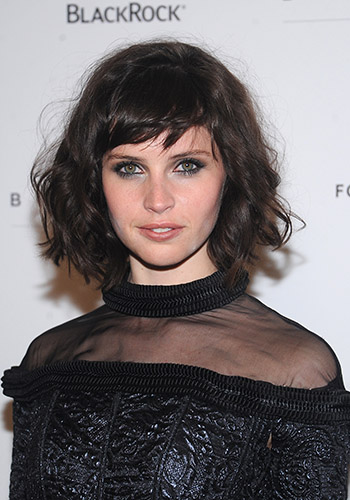 You’d think Felicity Jones would be used to the deafening roar of applause. The British actress stole hearts in Like Crazy and The Amazing Spider-Man 2 and has taken on the ambitious role of Jane Hawking, wife and brilliant supporter of genius Stephen Hawking, in the well-received biopic The Theory of Everything. The film dropped at the Toronto International Film Festival to thunderous praise and sparked awards buzz around leads Eddie Redmayne and Jones. But the 31-year-old actress was still nervous. “I thought they were going to hate it,” she says when we sit down, tucking her pristine white dress around her knees. “It’s very personal for all of us. Eddie and I cared so much about Jane and Stephen—we wanted to bring their ferocity to the screen.”

Jane and Stephen had a complicated relationship. What was your impression when you got to know Jane? “I was so intimidated by her. Her level of sacrifice and commitment to Stephen was phenomenal. She’s someone behind the famous and rich person who does more of the mundane and less glamorous work, so it did feel like a challenge to bring Jane’s inner strength to the screen.”

She is so strong yet so vulnerable. “I think that’s what’s important with female characters: It’s not just about being tough or vulnerable; it’s about a combination. It’s about showing humanity, isn’t it? I just want to play complex, interesting female roles as much as I can. I’m lucky that I’ve been able to do that.”

GALLERY: The hottest TIFF red carpet style of all time

How do you deal with the ups and downs of the industry? “I was watching interviews with Bette Davis recently and I was like, ‘That’s how you have to be! That woman had nerves of steel!’ You have to have a strong sense of self, otherwise I don’t think you’d survive. I’ve been doing this for 20 years. I started when I was 10, so I guess I’m ready for retirement.” [Laughs]

Have you adapted to fame? “I think it sounds awful. I mean, who would want to be famous? It sounds terrible.”

The Kardashians, maybe? “Losing your privacy doesn’t appeal to me at all. I like being able to walk down the street and not have to talk to people. I think there is a lot of confusion now between ‘celebrity’ and ‘acting’; they are different things.”

Do you choose roles with that in mind? “I love this idea that we have infinite choice, especially for female parts. There aren’t tons of great female roles for film coming through the doors, so I take what I can get and make the most of it…. You want to inhabit that role and let that person’s thoughts become part of your subconscious. I immerse myself in it.”

It must feel kind of like a breakup at the end of a film. “There is this sad sense of loss. But you get used to it. You get tough because you’re constantly meeting new people and the world is changing—you become a bit like a circus performer. When I was watching the film last night, I thought it had a very human conclusion. It was about rising above evil and not taking everything so seriously—celebrating how lucky we are to have health and how lucky we are to have life.”