Felicity Huffman shows off her masculine side 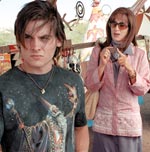 While her Desperate Housewives co-stars are busy cashing in on their burgeoning celebrity by signing multi-million dollar contracts for shampoos and hair colour, Felicity Huffman is sticking to her knitting. Huffman, who recently won an Emmy for her portrayal of harried mother Lynette Scavo, may need to find another showstopper gown to wear to the Academy Awards.

She has already scored a best actress award at the Tribeca Film Festival for her role in Transamerica, which was screened at this year’s Toronto International Film Festival and released on December 2, 2005.

In the movie, she plays a man who is trying to become a woman. “This part was an actor’s wet dream,” says Huffman. “I loved doing it because it wasn’t an issue movie. Sometimes in issue movies, you miss the truth of the human soul and the journey we go on.”To prepare for the part of Bree, who is in the midst of a sex change, Huffman consulted with transgendered individuals and studied with voice coaches.

“The hardest nut to crack was getting the voice right,” admits Huffman. “Hormone therapy doesn’t change a man’s voice, so he may look like Kate Moss but still sound like James Earl Jones.” Huffman finally found a coach who helped her to lower her voice, but the transformation had a certain side effect. “After about a week and a half, my husband (actor William H. Macy) told me to “call home at the end of the day when you can drop the voice; I don’t know who you are!”

Never one to shy away from showing vulnerability and emotional and physical rawness onscreen, Huffman admits that there’s huge pressure on actresses to look young and sexy. “In college I weighed 160 pounds and had a bad perm, so I knew I was never going to be the glam one. Diane Sawyer once asked me what it felt like being on the Housewives set with the other actresses, and I said, ‘I feel like the fat, old, ugly one — but it’s a break!”