Also: How to wear heels in a blizzard and not die. 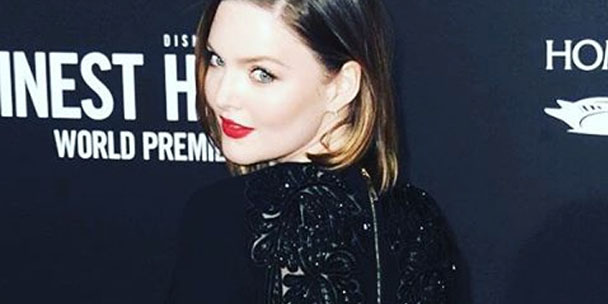 In the new rescue epic The Finest Hours (do yourself a favour and see it in 3-D—rollercoasters got nothing on crashing through gigantor waves in a teeny tiny Coast Guard boat with Chris Pine by your side), Holliday Grainger plays Miriam, the fiance of the aforementioned Pine’s character Bernie Webber, who spends much of the movie anxiously waiting on land for her guy to come back from what is essentially a suicide mission in the worst storm of the season. Although she actually ends up saving the day (no spoilers, but Miriam’s a tough cookie in her own right), it’s all a bit nail-biting and tense until we get to our happy ending. Also, did we mention this is all based on true events that happened in 1950’s Nantucket?

In person, however, the 27 year-old British actress is anything but stressed out—in fact, when we meet her in Toronto, she’s curled up on a hotel room sofa, lounging in a black velvet jumpsuit, shoes kicked off on the floor. (She actually invites us to do likewise, which we totally would if we weren’t wearing the kind of boots you need three assistants to put back on). It’s natural then, that the conversation immediately turned to footwear, and her character’s less than logical shoe choices on screen…

Q: For the majority of the film’s action Miriam is wearing a pair of very high heels, which is crazy, because she’s out and about driving around in a blizzard most of it.

A: We actually had conversations about it! She was coming from work, so she would have been in heels, but it came down to how comfortable was I in heels? I said it was fine…and then cut to 7 am in the freezing cold, and I can’t even put toe warmers in the shoes because there’s no room for air to circulate so they can activate.

A: They’re pretty good about putting sand down and things—there’s a lot of people on set making sure an actress doesn’t break a leg!

Q: You wore basically the same outfit the entire movie. I assume there were multiples of everything?

A: Yes, there were a couple of those dresses. You wouldn’t believe how many layers I could fit under that thing! By the time I had a coat on at the end, there was a discussion of someone wanting me to keep it open. And I was like, “Hell no.” If I shut it, I can have 7 jumpers on!

Q: So you were genuinely cold filming?

A: I spent a lot of time as a kid filming on Yorkshire Moors, so I’m used to being cold on set and trying to look like I’m not. There was a shot in the movie where Miriam leaves her car [to walk outside] and in some of the focus groups they kept bringing it up, saying “She doesn’t look cold, she doesn’t look like she’s been walking through the snow.” And I’m like, “I whaaaaaat? DO YOU KNOW HOW COLD I WAS SHOOTING THOSE SCENES?!?” I think it’s some of the only shots of mine that they ended up taking out. But that’s actually hilarious because I was so cold.

Q: Is that genuine snow covering the Nantucket landscape most of the time?

A: It was fake. But I believed it. Even my manager came up and was like, there’s so much snow. It wasn’t, it was all fake. But because it was so cold, I completely forgot it was fake. In the end, I think we ended up changing the fake snow to real snow. So it’s real, but it didn’t fall from the sky.

Q: Speaking of real—this is based on a true story, which is crazy, because if I didn’t know that, I would have said this movie just stretches the audience’s belief a bit far. Like this tiny boat going out and managing to save over 30 guys in a hurricane strength storm? Yeah right.

A: It really happened. And if you listen to interviews with [the real life hero] Bernie Webber afterwards, he’s amazingly humble about it and he so pushes the fact that he didn’t do anything special, it was just his job. I mean, if it were my job, I’m not sure I could achieve that. But, also, some of the events are so coincidental or unexplained, he describes it as an act of God. God was on his side. One of the coast guards at one point got washed off the boat by a wave, only for the next wave to put him back on the boat. I’m like, “I MEAN…” That was for real genuine.

Q: Early on in the movie, Miriam proposes to Bernie and he says no. I have a theory about that: I think Bernie then went out on this crazy mission because his girlfriend proposed to him and felt emasculated.

A: I like to think that Bernie’s got far more integrity and honesty in his soul! That’s one of the reasons why I love Bernie in this movie. He seems to not have that macho pride, in my head, anyway.

Q: I was actually surprised when he said ‘no’ to Miriam’s proposal.

A: He knows how dangerous his job is and he doesn’t want to like have that responsibility for someone else when he already has that responsibility for other people’s lives. I think that’s why it’s such a happy ending that Miriam goes on her own journey to understand this community, to come to terms with it, to face her own fears, so that at the he can say, yes, it’s all right because you know what you’re letting yourself in for.

Q: You take on a Boston accent for this movie…

A: We did a lot of tweaking of the accent as we were going along because obviously we wanted it to be identifiably Boston but at the same time she’s college educated and works at a call center, so she’d be actively trying to be eloquent. I was always concerned if I was sounding like I was doing a Boston accent but not doing it well if I was doing it “semi”. There was always constant discussions of how much “rrr” should I put in this sentence, like, when will it come out, when won’t it. I still feel like I only got it towards the end of the movie, so there are still scenes in this one where I’m like, “Ugh God, I wish I could redo it.”

Q: Was this an easy character for you to channel?

A: It took a little while to feel like I had found her, but I got to meet one of Miriam’s contemporaries, and that really help me get into her mindset.

Q: What did meeting that contemporary reveal to you about Miriam?

A: It was a different era of strength. It was not just about female independence. It was a strength of a mind, of going for what you want. For me, I found it difficult initially to marry the idea of strength and self-assuredness with a strong desire to get married. For me the two seem like a dichotomy. Miriam’s self-assurdness is that she knows what she wants and she wants Bernie, and there’s certain amount of strength in standing by your man, which is almost like a maternal protection for a family she hasn’t quite had yet.

Q: She is very sure of Bernie. She knows what she wants. Are you like that?

A: I’d love to be more like that, but I’m definitely thinner-skinned than Miriam. It feels like she’s not phased by Bernie’s no because it’s like she knows he doesn’t really mean, “No, I don’t want you,”, but “No, it’s just not right yet”. There’s such strength to be able to feel comfortable in your own skin at that kind of rejection. They’ve got a magnetic surety about their relationship. But I do think I’m an instinctive person, if not quite so outwardly as Miriam.

Q: When have your instincts been really spot on?

A: I kind of do it with life and work. This sounds so wanky, but I do feel like if you project a feeling or a surety of how something is going to go, it tends to be all right. Quite often if I get to a point where if I haven’t got the next job I want to do, if I just really imagine what is it that I want to do next, then it seems to come along. And if I’m not sure, then I’m lost. It’s almost like I need a certain amount of self-assurety for it to be a self-fulfilling prophecy.

Q: A kind of mental vision board?

A: Yeah! If I put it on there then it happens, and if I’m wandering around lost, I will just wander around lost.

Q: When you do feel lost about something being presented to you?

A: I think my first instinct is always right. I could answer “yes” or “no” to a job within the first 10 pages of reading a script all the time, but I never let myself. I always go through this long process of deciding, and then I will always come back to my initial conclusion. But at least I know I’ve made the right one by then. Miriam would know, she would just say yes or no sraight off. I’m far more a procrastinator. I’m an instinctive procrastinator!

The Finest Hours is out January 29.

Meet Stella Maeve, star of your next television obsession