EXCLUSIVE: The Business of Being Kylie Jenner

The social media star opens up about those plastic surgery rumours, life on social media, and her relationship with Caitlyn. 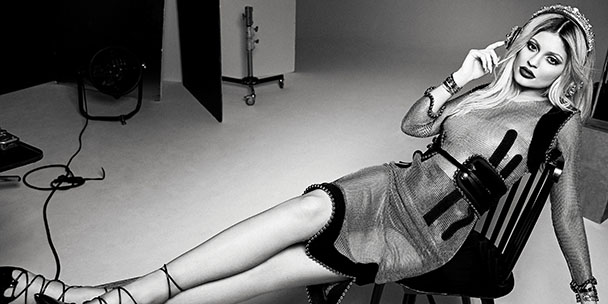 Kylie Jenner hardly needs an introduction. As the youngest daughter of Kris and Caitlyn (born Bruce) Jenner, she has starred alongside her sister, Kendall, half-sisters, Kourtney, Kim and Khloé, and half-brother, Rob, on the reality show Keeping Up With the Kardashians since she was just 10 years old. (The show, which just premiered its 11th season, is as popular as ever.) Now 18, Jenner has spent the past two years transforming herself from reality-TV star to fashion and beauty personality.

Currently, Jenner has more than 40 million Instagram fans following her every sartorial and beauty move. (Seen a bunch of girls and boys with blue hair recently? That’s because of Jenner.) But it’s not just her devoted fans who obsessively track her. Whether it’s her hair transformations (Mint green! Teal ombré! Bleached blond! Jet black!) or snapshots of her daily life hanging out with friends and rapper boyfriend Tyga, every single thing Jenner does or posts online immediately becomes worldwide news.

On the morning of our live cover shoot, though, all is quiet on the social-media front. And that’s because Jenner, who arrives sans makeup and in head-to-toe black, has requested a “peaceful space” while getting her hair and makeup done by long-time family friends hairstylist Jen Atkin and makeup artist Joyce Bonelli. And by “peaceful,” she means absolutely no photos. None.

She can’t really mean NO photos, we all think. This is, after all, a girl who has grown up in front of a reality-TV crew and has one of the most-viewed accounts on Snapchat—ever. But we quickly learn that peace and quiet is something Jenner rarely gets, so when she can, sneaking in moments of complete privacy is a welcome reprieve from the social-media storm that typically surrounds her.

At noon, Jenner lifts the photo ban, and our live cover commences. She starts by posting a shot of her impromptu haircut and newly-bleached-blond eyebrows to Instagram. The reaction is immediate. Within seconds, comments ranging from passionate fan-girl love to intense hate flood Jenner’s feed. Within the hour, the Daily Mail has picked up the photo as a news item. The comments continue to pour in (the post currently has 1.5 million likes and 36,000 comments), and with each subsequent image that both Jenner and ELLE Canada post come more likes, reposts and comments at dizzying speeds.

Throughout the day, we all feel the love: “SHE IS SO FLAWLESS OMFG”…and the hate: “She is hideous look at her face now.” Watching this in real time is surreal, but Jenner seems unfazed by it all. Between posing like a pro in front of the camera and dancing and lip-synching to Kanye West on-set, Jenner retreats to her “peaceful space” to either FaceTime with her older sister Khloé or goof around with Atkin and Bonelli.

When I chat with Jenner over the phone a few weeks later, she has just returned home from New York, where she launched her new app, Kylie, during New York Fashion Week. After a whirlwind week of press, inter­views and countless photos, she’s happy to be home—or, as she calls it, her “safe place.” While taking a break from creating content for her new app and decorating her recently purchased Calabasas, Calif., home, Jenner opens up about what it’s like to be at the centre of so much love and hate, all those plastic-surgery rumours, her relationship with Caitlyn and how she’s approaching the next decade.

I’ve noticed that you haven’t posted anything on social media today.
“Today, I said that I’m not going to Instagram and I’m not going to Snapchat because I don’t even want to hear it, you know?”

I can understand that. I was actually taken aback by all the negative comments that were said about you when we did our live cover shoot. How do you deal with these types of remarks?
“I mean…I’m still human; I can’t come across something so hurtful and just brush it off and go on with my day. It’s really hard, and I’m still growing up. Surprisingly, it wasn’t as hard for me when I was younger. When I was 15 or 16, I never looked at the comments; I never Googled myself—I wouldn’t go there. I didn’t even know about any of these mean blogs. I know that if you don’t read it, it doesn’t affect you, but it’s still hard.”

So why keep sharing?
“I always try to remind myself that it comes with the lifestyle. If you look at other celebrities who get the same sort of attention as I do, they are barely on Instagram or they don’t even Snapchat—but I love to share! And I can’t live my life reading all the negative comments because there is still so much positive stuff out there. There’s good and bad with everything.”

Is this what inspired you to create your social-media anti-bullying campaign, #IAmMoreThan, which launched in September?
“I get bullied all the time over the Internet, and I feel like the bigger I get, the more love and hate comes along with it. But there are so many other people who get bullied way worse than me, and I wanted to share their stories. I wanted to show my fans the people who inspire me, who have been through the darkness of bullying and not only overcome it but done something better with it. And they can use my platform to share their voice. I feel like if I only shared my story about bullying, it wouldn’t be as impactful as hearing other real stories that inspire me.”

How did you find these stories?
“I launched the campaign and created the hashtag #IAmMoreThan. After that, I just started looking through the posts. I literally just look through the hashtags and read each story. The last person I chose sent me a three-minute video to say how thankful he was that I posted his story. It’s really nice, and I feel like people need to hear these stories and realize that bullying is just not okay.”

I also wanted to talk about your new app, Kylie. Congratulations on reaching number one on the iTunes sales chart right now. How did the idea for the app come about?
“Thank you! I got to this point where I knew I didn’t just want to go on Instagram anymore or share a short video—I wanted to do something more personal. There was always this idea floating around that my sisters and I would all have our own platforms. We had websites, but they weren’t updated, so we thought of this idea to each have an app. I’m super-involved right now and spend a lot of time creating content every day. For my fans, I feel like there is just so much they don’t know about me, and I’m okay with sharing.”

Well, you must be used to sharing—you’ve been on a reality show since you were 10.
“Well, yes and no. When I first started on the show, I didn’t want anyone to know who my friends were and you never saw any of them onscreen with me. I always wanted to keep my family life on the show, and when it came to me hanging out with my friends and doing, you know, teenage stuff, I wanted to keep that private—and I still do. And with any relationships—I don’t think I will ever be super-public about my relationships.”

But it seems like you’ve been sharing a bit more of your personal life with fans. [After she turned 18, Jenner went public about her relationship with 25-year-old rapper Tyga.]
“That has been pretty organic. But I do think that if you let people in too deep, it gets hard—your fans get too invested, and then they know when you break up and make up. I don’t want people to know every time we fight or break up, so I’d rather keep some things private.”

One of the topics you’ve been more open to talking about is plastic surgery. You recently caused a media storm when you revealed that you got your lips done.
[Laughs] “When I got my lips done, I literally told no one! I didn’t tell my best friend or even the guy I liked at the time. I really thought it was no one’s business. My mom was super-against it, but I begged her and begged her and she finally let me do it. After I did them, I thought it was so obvious that I didn’t have to say anything. I never denied it because I always told my publicist ‘no lip questions,’ so no one ever asked me. I never said I got them done, but I never denied it either. But people thought I was such a liar!”

And then the rumours just kept on coming….
“Yeah, then people were saying I got my chin reconstructed, that I got a nose job, an eyebrow lift, I got my boobs done, this and that. So I wanted to come out and say that this is crazy and I only got my lips done. I don’t think people realize that I just turned 18. There’s no way my mom or any doctor would let me go under the knife like that—that’s just so crazy!” [Laughs]

So, in the end, what made you want to come clean?
“I don’t want to be a bad role model. I don’t want my fans to think they have to get lip fillers or look like me in any way. I wanted to let them know that it was always an insecurity of mine and I did it strictly for me.”

You use the term “role model”—how has this transition been for you, realizing that young girls and boys look up to you?
“When I see my fans and they have blue hair or dress like me, it’s really cool and makes me feel good. But I don’t want them to think they have to look like me! I want to inspire them to be themselves and not listen to anybody else.”

One of your role models has always been your dad, Caitlyn Jenner—how has your relationship with her changed this year?
“I just find that because everything is open and honest now, we actually spend a lot more time together. It was really hard for me in the beginning, but now it’s much easier. It’s ‘she’ now, but it was ‘he’ who always had this secret. Now she’s just free and way happier, and it makes me feel more comfortable. It’s cool. She’s the same person—she just looks different.”

When you think of what’s to come, what do you see yourself doing?
“I remember telling my mom a year ago that I wanted to do some acting, and she said, ‘Kylie you’re a businesswoman.’ Now I feel like I’m getting there. I don’t know, I just love doing new things…I’m a mini-businesswoman!”