EXCLUSIVE: Rosamund Pike found a very creative use for maxipads on the set of "A United Kingdom" 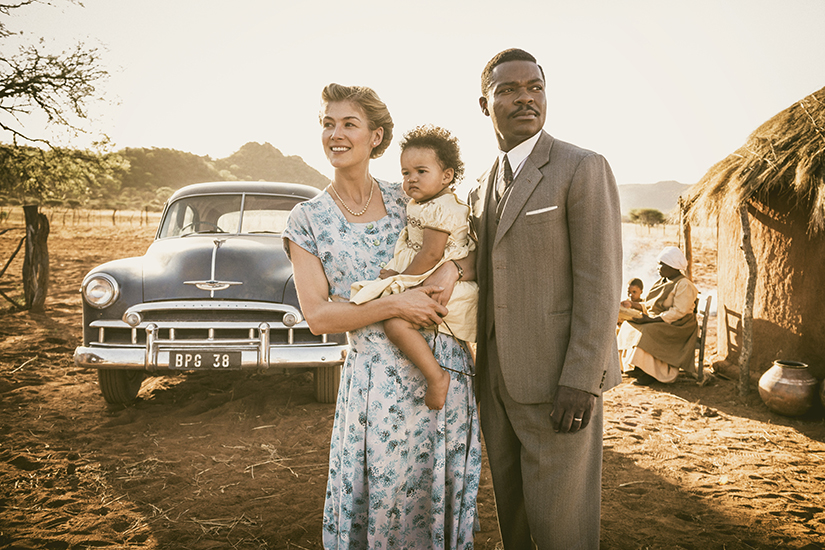 There’s a dramatic moment around the middle of Rosamund Pike’s new film, A United Kingdom: Pike, playing a British woman who falls in love with an African king (based on a true story!), faints in the middle of a dusty road, collapsing after driving through the heat while heavily pregnant. Her husband, thanks to the machinations of a racist government determined to end their interracial union, is stranded on the other side of the world, and she’s about to give birth to their first child, while knowing she might never see her man again. Suffice to say: It’s a tense, emotional scene in a movie that’s not lacking in heart-wrenching, gut-punching moments.

But when Rosamund lets us in on a little secret about how that scene was filmed, well…it certainly changes how you’ll re-watch it.

“I had to fall down,” explains Pike, over the phone from her London home. “We were in a terrible rush, and there weren’t any knee pads or elbow protectors. Since nobody else was coming up with anything else, my dresser and I came up with the best possible use for panty liners with wings—I put them all over my body! I finally understand their purpose.”

Here are four other surprising things we learned from the 38 year old actress about her new film, in theatres today.

1. They shot in the exact house that the real life couple the movie is based on lived in

“We shot on location in Botswana, and we used the first house they lived in. The feeling inside there is pretty powerful. There was something magical in there. It gave me goosebumps at the time. It’s rare that something like that happens, but it’s great when it does.”

2. Towards the end of the film, Rosamund’s character steps out of her house to find the women of her husband’s kingdom singing for her. Turns out, that was entirely spontaneous:

“When I came out of the house and they were singing like that, it was the most mind-blowing thing that happened to me on set. I just dropped because they were not asked to sing that song, and yet they were caught up in the moment enough to be playing the moment for real, singing that song about how the king’s wife is bright like the morning star.”

3. She finally got to work with long-time pal David Oyelowo, who plays her husband

“His laugh is the best thing. It’s the most generous, big-hearted, sexy thing. I mean, it’s amazing. We’ve been friends for some time and I never knew we’d have this magical chemistry. I mean we could both play the part, but I didn’t know we’d find something so magical, which I think comes from our passion for the project.”

4. Rosamund took away a very valuable personal lesson from making A United Kingdom