EXCLUSIVE: Naomi Watts on what truly makes her happy

A casual catch up with the megawatt Aussie actress. 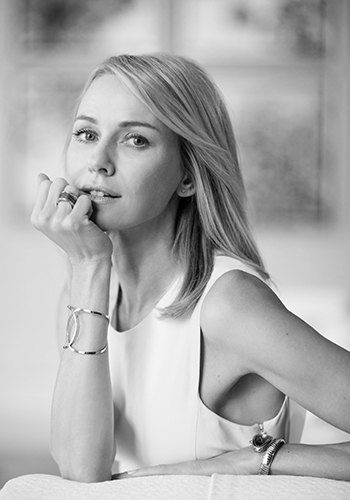 Watts has a comportment that makes browsing the tea selection on a cater­ing table look refined and a way of sitting up straight in her chair that instantly elevates the rather bland hotel room turned interview space in which we currently find ourselves during the Toronto International Film Festival (TIFF).

All this could make the British-born Aussie seem unapproachable, but the opposite is true. She’s generous with her laughter, and while she isn’t exactly shy (she’s too confident for that), there’s a certain reserve about her that comes when a naturally introverted person becomes the centre of attention.

“It will never be a relaxed experience for me,” says Watts of attending film festivals like TIFF, where she’s premiering two films, Demolition and About Ray. “Watching a film with an audience is scary because you’ve put in so much work. But then it’s also a way to finally be objective. I get to watch the audience watching the film, so I experience it in a new way.”

Although Watts worked steadily as an actress throughout her 20s, her career only started taking off when she was in her early 30s, with cult classics like Mulholland Drive in 1999 and The Ring in 2002. “I got recognition late—I was in the last days of playing an ingenue. Almost straight after Mulholland Drive, I was playing mothers! But the longer the life, the richer it gets, and hopefully the roles I’ve taken reflect that.”

But more than 15 years after her “breakout” moment, finding great female-driven stories is still a rarity. “Unfortunately, there are too few, which makes no sense because there are as many women in the world,” she says. “And why shouldn’t we be telling these stories? They’re just as interesting.”

The Oscar-nominated actress should know: In the past five years, she has played an undercover CIA operative (Fair Game, 2010), a mother struggling to reunite her family after the 2004 tsunami in Thailand (The Impossible, 2011) and a Florida convenience-store clerk dealing with an unplanned pregnancy (Sunlight Jr., 2014).

She’s in the midst of a transition, though, and has been exploring the funnier side of her creative wheelhouse recently with two comedies (albeit dark ones): St. Vincent and the Oscar-winning Birdman.

“I had to change it up, show another colour, particularly on the heels of two very dark movies like The Impossible and the [Princess] Diana movie,” says Watts with a laugh. “I just wanted to not always play the woman who is in pain or having a nervous breakdown!”

Doing two lighter films has given the actress a “little bit of confidence” when it comes to her com­edic skills, which is why she’d love her next film to be an animated one—but, she adds in true Watts style, “something with a bit more arch would be more interesting to me than a safe, sweet family movie.” (Watts did say she has some voices up her sleeve but refused to do any on request. Understandably.)

Part of the reason she wants to do an animated film is so her children can enjoy it. And throughout our conversation, it’s clear that her two sons, aged eight and seven, along with her partner, actor Liev Schreiber, are what really make her world go round. “I try to live my life as a normal person would, even though it’s not normal to have paparazzi follow you about,” she says. “I’m not going to have my kid get a late note [at school] because I had to spend an extra 20 minutes blow-drying my hair!”

When talking about her family, Watts’ face lights up. Even when she was approached by L’Oréal Paris late last year to be a brand spokesperson, it was her family that came to mind first. “I thought, ‘Oh, this is going to be easy—I know how to sell a L’Oréal product like Elnett.’ I have images of my grandmother spraying this plume of it around her head, setting her ’do in rollers,” she says, smiling.

She laughs when talking about Schreiber, who pokes fun at “how English” she and her mom get when they’re in England. “He always says my accent changes depending on whom I’m with—and he’s probably right!”

Her most unguarded moment comes when she’s asked what she would do on a perfect day, free of the restrictions of time, space and reality. “I’d go up on a magic carpet with Liev and my children. We’d be up in the clouds, having a very nice picnic!”