EXCLUSIVE: Liya Kebede on Jake Gyllenhaal, her fave scent, and being the new face of Eternity Calvin Klein 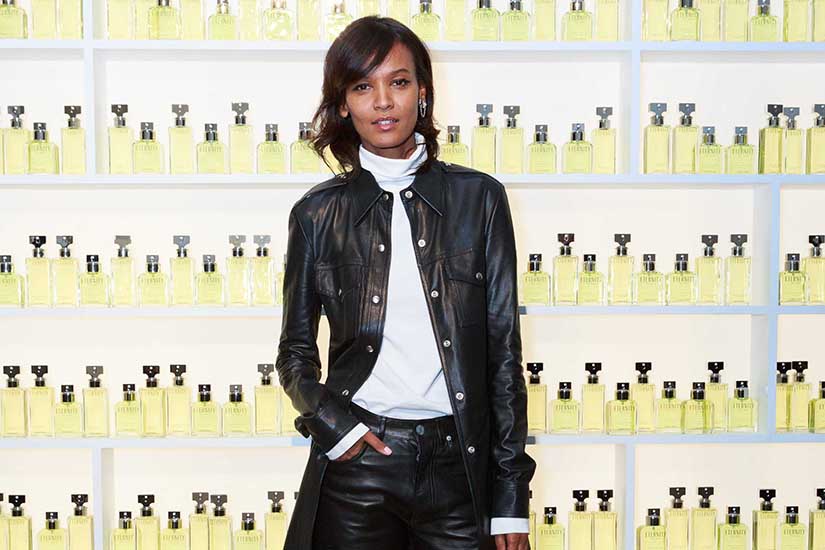 It was one of those coincidences that can only happen in a city of 8 million people: Last Thursday morning, I was sitting in a French cafe in New York’s Soho neighbourhood, drinking my latte and ogling on an adorable (also) French bulldog on the bench outside. One empty seat down from me (it was one of those benches-in-windows), I was aware of a woman, talking on her phone as she sipped her tea. I heard the words “Calvin Klein” and “this afternoon” and suddenly realised: This was Liya Kebede, top-flight model, advocate and one of the new faces of the fashion house’s iconic Eternity fragrance…and who I was actually in town to interview about that new role that very afternoon.

Having come to that (slightly awkward) realisation, I was faced with a dilemma: I could let the 39 year old finish her conversation and introduce myself, but well, given my fear of Stranger Danger is so high I don’t even look at the people sitting next to me in a cafe (which is how I missed clocking Kebede’s unmistakable face in the first place), I didn’t think she’d welcome it. Also, everyone has a right to Facetime in peace, even if you’ve just seen their brand new campaign for Eternity Calvin Klein—complete with Jake Gyllenhaal and an insanely adorable four year old—and you’re dying to ask them all about it.

My quandary was ultimately solved by a bearded man with a laptop who came and sat on the stool in between us. Liya left shortly afterward. I was still debating whether to bring it up at all (it’s kinda weird that I was eavesdropping, right?) when it literally was the first thing to fall out of my mouth when we (officially) met later that day.

Were you at [REDACTED FOR LIYA’S CONTINUED LO-PRO TEA-ENJOYMENT] earlier today by any chance?

I was sitting next to you actually.

That’s hilarious! That’s New York right? You sit with people, you don’t know who you’re sat with… that’s funny. I go there a lot.

On to Eternity Calvin Klein: I feel like it’s one of those fragrances that’s so iconic most people have either worn it themselves or have someone close to them who did or has. Is that true for you?

Absolutely. I actually have a funny memory about it. The men’s one reminds me of this boy that I had a huge crush on in high school. He used to wear Eternity, so it reminds me of this really cute moment of crush and romance. A lot of my Eternity memory is that cute one. I’m now making a new one, of course…

Speaking of making that new memory: The face of Eternity for Men is Jake Gyllenhaal, who was also really involved in this campaign’s creative direction. What he like to work with?

Very nice, very easy. He was very involved in the concept and in the making of it, and really passionate about it. I could see what he was thinking about what’s going on in the world today. I just feel like it’s a beautiful message. It’s funny, but we only shot this picture together [points to the campaign image]. We shot this picture after we had done the video. He had done the video with [the child who plays their onscreen daughter] alone and then I had done the video with her alone, and so we didn’t really work together on that. But then we ended up on the photo shoot together and that’s when all the three of us came together…

I just had a chance to watch the commercial and it’s very moving, unexpectedly so.

I know, it’s very emotional….and the poem was so beautiful…

…and Leila, the actress who plays your ‘daughter’ is majorly cute.

Her personality is even more so! It’s funny because she shot with Jake first, and when it came time to do our scenes, we first did it without sound—we talked and laughed and just enjoyed each other. And then at a certain point we had to start saying the poem, and they warned me: “She heard the poem a lot yesterday so she might get kind of annoyed with it”. So then I start saying the line, and she’s like, “That’s the thing the guy with the beard was saying yesterday. I don’t want to hear that anymore!”. [Laughs]

She definitely has a charisma.

She’s really special. I was obsessed. She has that unfiltered innocence. She makes me want another one! [Kebede has two children] I was thinking about that actually, and I’m not sure if I’m being naive, but when I see this commercial, I’m like, “Does it make people want to have babies?”

Well, if you could guarantee it would be like that: A beautiful house where it’s always a lazy Sunday morning, your partner looks like Jake Gyllenhaal…why not?! Speaking of bliss: Is there a particular smell that is immediately evocative of a happy place for you?

I love rain. There’s something about it—on dirt, on tarmac—you take it where you can get. Tropical rain, of course, is nice. And who you’re with makes all the difference in the world….