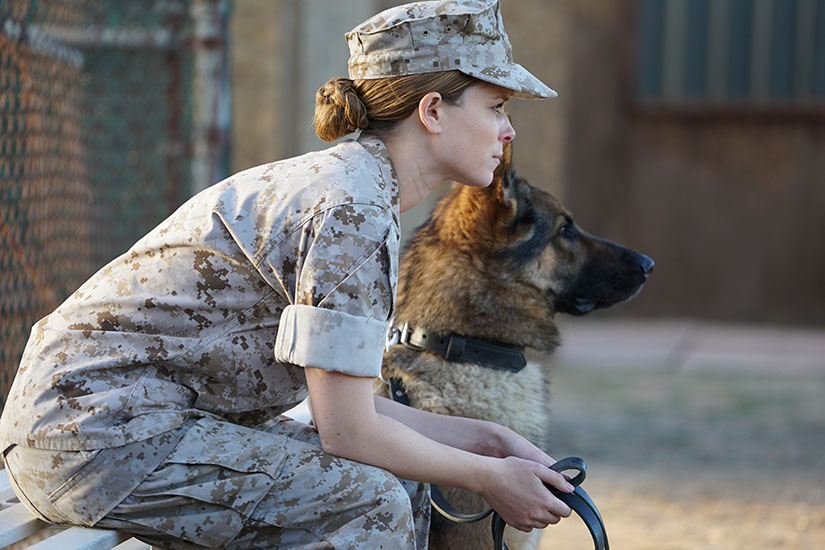 When we meet up with Kate Mara, we’re trying to have a serious conversation with the actress about her new movie, but keep getting interrupted by cheers from the street many floors below. “What is that?” asks Mara with good-natured frustration. “I’ve been hearing it all afternoon long.” (It later turns out that it’s one of those giant bicycles people ride around on for charity) That mild outrage is about as animated as the 34 year old gets during our chat, relaxed and self-contained across from us, her red velvet dress the same texture as the armchair she’s sitting on.

ELLE Canada: I got a chance to watch your new film, Megan Leavey, this morning, and I’m still feeling some of the feels. It’s obviously a movie about a soldier and the dog who changes her life, and as a dog person, it just got me.

Kate Mara: I cried reading the script as well. It’s rare when that happens, so I was really excited that this [true] story hadn’t already been told and I could be a part of it.

EC: What about this story particularly moved you?

KM: I was moved by Megan’s journey, the fact that she felt alone and like she didn’t have a real purpose or reason to live, and then watching her find her voice and confidence was really moving to me. Everybody experiences something like that in their lives. And then I was incredibly moved by the relationship she built with that animal and how it helps her form better relationships in her life. I think that’s probably true for a lot of people.

EC: This movie is based on the true story of a real woman named Megan, who enlists as a Marine and ends up fighting in Iraq as part of the Canine Unit. We don’t see a lot of stories about woman at war.

KM: It’s just as rare for us female actors to be sent scripts about us. I wish there were more because as a movie goer, that’s interesting to me. There are endless, true life stories that happened that we just don’t know about.

EC: This is especially remarkable because this is a woman in combat, and not say, a nurse or the wife of a soldier, which is what we’ve seen so much of.

KM: I’ve played those roles—I’ve literally played the wife of a marine—and those stories can be incredibly interesting, but I’m just glad to be in one that can teach people something. There are some really beautiful lessons in this.

EC: So the cliche is “don’t work with children or animals”. How was it working with a dog as the other main character?

KM: There were actually three of them, but Varco was our main guy. He was just so talented. It was actually his first movie.

EC: Did they test you guys for chemistry?

KM: No, but we spent a few weeks together before filming so by the time we got on set, he was used to my smell, my presence and I was very comfortable with him.

EC: What did you guys do together beforehand? Like did you hang out?

KM: It wasn’t casual. It wasn’t like, snuggling on the couch. We were being trained.

EC: Did having him there make you approach acting any differently?

KM: Not really. There were some moments that just didn’t work, like with a real life marine dog. Sometimes you would tell him to sit, and he’s like fucking tired and just wants to lay down.

EC: You were instrumental in bringing the director, Gabriela Cowperthwaite on board. Was it important for you to have a woman directing this female-centred story?

KM: I think it’s important for women to be a part of telling female stories, but that isn’t the main reason why I though of her. I thought of her because of Blackfisk and because we were friends and I knew her passions an