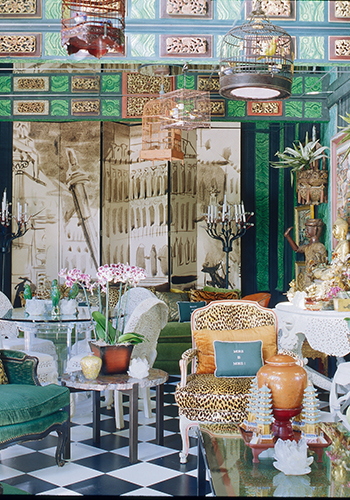 As the team behind our September cover with Diane Kruger assembled at the airport on route to LA, we couldn’t stop talking about Dawnridge – aka the over-the-top home of late design legend Tony Duquette and the site of our virtual reality cover shoot. Duquette is an icon in the design world, working as a costume and interior designer from the 1930s up until his death in the 1990s, he created a highly individualistic design philosophy, inspired by Old World European palaces and turn of the century Chinese gardens. Dawnridge, his personal home that he built in 1949 after his marriage to artist Elizabeth Johnstone, became a haven for artists and screen stars like Mary Pickford and Buddy Rogers. Speaking to interior designer Hutton Wilkinson, Duquette’s business partner and collaborator for more than 30 years, we get an exclusive, inside take on one of the smallest, yet grandest homes in Beverly Hills.

Tell me a little about yourself and your relationship to Dawnridge?
I wanted to work with Tony Duquette since I was in seventh grade. I got my chance when I was 17. I had an art teacher and she would ask me: “If you were Tony Duquette how would you do this project?" One day she put a note in my locker that said Tony was looking for volunteers to work on an art exhibit. I quit school and my job that day and went to work for Tony as an unpaid volunteer. I worked for Tony for two years before deciding to open my own interior design business, and then Tony and I became investment partners. We not only designed houses together in Paris and Venice, but we were also asked to design a collection of fine jewelry, set with precious and semi-precious stones in 18k gold for Bergdorf Goodman. Before Tony died in 1999 at the age of 85, I promised him that I would try and preserve Dawnridge. I purchased the house and have kept it as a tribute to Tony and his wife, and have redecorated the house using only works, furniture, sculpture, paintings and interior decorations created by them.

How would you describe Tony Duquette’s style?
Tony was an artist, always modern and of his time. He never compromised and he was usually never wrong in his choices. He is the father of maximalism in interior design. I would definitely have to call his individual, neo-baroque style, maximalist!

What do you think Tony’s inspiration was when designing Dawnridge?
When Tony visited Venice for the first time in 1947, the palaces along the Grand Canal enchanted him. For Tony, Dawnridge was meant to be reminiscent of a Venetian palace, even though it was only 900 square feet (a 30-by-30 foot box). But boy, what a box!! Many people have called it the grandest house in Beverly Hills, but it is actually one of the smallest houses in Beverly Hills!

What was Tony trying to achieve with his gardens at Dawnridge?
Tony believed in the Tao philosophy of decoration, and always “following the path of least resistance.” He’d say, you have to listen: to the house, to the garden, to the room…each will tell you what it wants to be – but you have to listen and hear it and then do it. I think the gardens at Dawnridge are gardens of earthly delights, which is quite the contrast to the (sometimes) predictable Beverly Hills landscape of clipped lawns and palm trees. He conjured these gardens like a sorcerer; and they became his idea of the lost gardens of Yuanmingyuan from the 18th and 19th century in Beijing. He used to think of his gardens as a living Coromandel screen.

What is your favourite thing about Dawnridge?
My favorite thing about Dawnridge is that nothing is taken seriously! It existed only for Tony and Elizabeth’s pleasure…and if others liked it and enjoyed it then that was just icing on the cake. Tony’s work was always done for the pleasure of his individual clients just as his own house was done to feed his own soul and make him happy. His vision at Dawnridge is a pure vision, and I am proud to be able to preserve and protect it. Who knows what would happen if it ever fell into the wrong hands…

What kind of legacy do you think Tony has left behind in the design world?
Tony has left a legacy of hope. In his life and in his work, he never allowed any room for negative thinking. As we enter into this new "maximalist epoch" of design, Tony Duquette and Dawnridge should be considered ground zero. Because Tony believed in the power of his convictions, because his work knows no fear, and because he never compromised, his life and work should stand as a symbol for those who strive to create rarified, one of a kind luxury products, interiors, fashion and accessories (especially in a world where individual taste has been diminished by ready-to-ship-good-taste). Tony would invite anyone to ask: "How can I make this my own?” Once people begin to answer this question, then a world of individual style will truly flourish, which is exactly what Tony has always wanted.