What's next for the Brit megatalent? 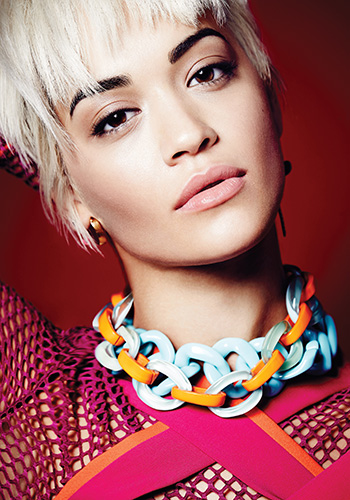 On a late September afternoon, Rita Ora arrives for lunch at Toronto’s Colette Grand Café. Sunglasses on, she is ushered to the table by a sea of people (all with cellphones in hand). Formal greetings are exchanged before everyone disperses and the pop star is free to slump down in her chair, remove her sunglasses, tousle her newly chopped hair and give an audible sigh.

“I’m not really eating,” she says, as if we are already mid-conversation.

“Why not?” I inquire. “Because you’re not eating!” We both start laughing, and I assure her I’m planning to eat, and, even though I’ve never spent more than a couple of minutes with Ora, I feel the need to tell her she has a long day ahead and should eat lunch.

“OH, GOD, I know! Okay, let’s eat something,” she says warmly. It’s the type of exchange I can see myself having with a good friend. And that’s the thing about Ora: She instantly makes you feel like you’ve known her forever.

For our live cover shoot the day before, Ora similarly arrived amid a flurry of people but quickly emerged from behind her keepers in order to shake hands with everyone on-set. And I mean everyone—from the photographer and the makeup artist to the caterer and even the lighting technician (who was more than a little taken aback by such a direct and friendly greeting).

And in the first five minutes after arriving for lunch, Ora describes the type of English country house she’d like (a cottage in the middle of nowhere, preferably with a lavender field) and confesses concern about her new haircut because tomorrow she’s meeting someone she “really fancies” and can’t decide if she should have short hair or long hair. (She’s worried that she won’t feel feminine enough with short hair.)

Connecting with just about anyone, anywhere, is part of the reason the 25-year-old Albanian-born Brit, even without ever having released an album in North America, is known—and adored—by legions of fans worldwide. (They call themselves “Ritabots.”) And while many songs, like “R.I.P.” and “How We Do (Party),” from her debut album, Ora (2012), soared in the U.K. charts and racked up almost 100 million views on YouTube, the singer still considers her newest album (yet to be named and out this spring) her real debut. “It’s so exciting that the whole album is finally coming together. It’s taken, like, seven years—and it’s been a long seven years, I can tell you that!”

To understand Ora’s mix of excitement, exhaustion and frustration, you have to go back to the beginning. She left school at 16 to pursue music and spent a couple of years performing on the open-mic circuit around London. At 18, she auditioned for the Eurovision Song Contest 2009, where she met her now manager, who urged her to drop out. She then flew Ora to New York to audition in front of Jay Z—who signed her on the spot to his label Roc Nation. Ora already had a debut album in the works, but she was asked to scrap many of the songs and explore a new sound.

The result was Ora, a bright, shiny pop album that catapulted the artist to fame across Europe. “Ora was to just see how it goes, and then it kind of exploded,” she says. “It was too late to release the album again because it found its way overseas via the Internet.”

After this, Ora worked tirelessly on creating a brand that centres on—you guessed it—connection. “It has always been a dream of mine to create this cult,” she says. “Back in the day, when punk was a lifestyle, people used to gather in under­ground raves and punk out. I know it’s different now because everything is so much more exposed. But even if it’s only 10 people, it’s my movement.”

On social media, Ora is known to answer fans directly, and at her shows she holds “counsel sessions.” “Before I start singing, I ask people things like ‘How did this song make you feel? What did you go through?’ We start having these chats. Then people are like, ‘Can you sing now?!’”

Over the past five years, labels like DKNY, Calvin Klein and Adidas have all sought Ora out, trying to tap into her fan base. And as a Rimmel London collaborator, she launched her second nail collection with the brand this past fall. She has also dabbled in TV and movies: Last year, she was a judge on The X Factor, and she played Christian Grey’s little sister, Mia, in Fifty Shades of Grey.

When asked how she has changed the most since being signed by Jay Z and releasing that first album, the conversation quickly turns to fame. “I wonder what makes everyone so interested in me,” ponders Ora. “It has made me really think about every move I make; it has made me more self-conscious. I always wanted the attention, but then when I started to get it, it made me second-guess everything.”

I’m immediately reminded of one of Ora’s new songs, “Poison,” which was released in early 2015. The video depicts her being “discovered” while hanging out with friends, only to lose herself in a glamorous new world, and follows her attempt at finding her way home. “I had this idea of a photographer who made me his girl, dressing me up, and how it was all so poisonous because I thought it was a world that I needed to be a part of,” she says. “I also made the video because I wanted everyone to know that even though I’m involved in other worlds, like fashion and movies, I still know who I am.”

Ora also alludes to the fact that “Poison” is a breakup song. “There was a time when my friends were actually like ‘We don’t recognize you anymore,’” says Ora, who, back in 2014, went through a messy public breakup with DJ and producer Calvin Harris. (He’s now dating Taylor Swift.) “I was constantly worried about this guy; even while on the road, I would think ‘Oh, my God, what is he doing? Let me fly him out.’ So, for me, ‘Poison’ is a really relevant video because it shows a form of honesty.”

In her own life, she credits her close-knit family and childhood best friends with helping her find her way back. “For a while, I was making music that was just not me,” she says. “Even my mom was asking ‘Are you okay?’”

Since 2012, Ora’s follow-up album has been imminent, but it was held up for unknown reasons. “I just haven’t been prepared to put it out, and that’s the truth. But I’m happy that I delayed the album because otherwise I don’t think the people who haven’t heard my music would have the right impression of me because that isn’t who I am.”

It’s clear from “Poison” and her newest release, “Body on Me” (featuring Chris Brown), that she has definitely left the sugar-sweet vocals and catchy pop choruses of her past behind, unveiling a more complex and mature sound—and the persona to go with it. After seven years, Ora finally seems comfortable with her voice. When asked how she has managed to stay so open and real with everyone, Ora immediately talks of going home to Albania for a friend’s wedding.

And while she’s excited for the album release, she’s even more excited to be home with family. “I’m telling you, man, it’s all about the people you have around you,” she says. “If people give you yeses and yeses and yeses, then you’re already screwed, in my opinion. You need them to constantly say ‘What are you doing?’ Those are the people I keep close.”

The business of being Kylie Jenner