EXCLUSIVE: Elizabeth Olsen on how playing it safe is the secret to her success

Plus: Why she's still not joining social media 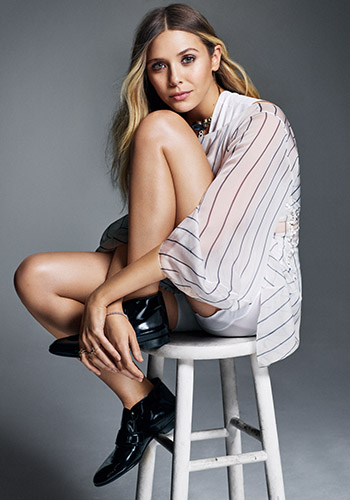 Elizabeth Olsen doesn’t like speed. Likewise “adrenalin or kicks.” In fact, she’s a self-described “very safe person” whose definition of dangerous driving involves lip-synching to Pretenders songs in the car and filming it on her iPhone for her friends.

Which is why she is more surprised than anyone by how much she loved learning how to snowmobile for her new film, Wind River. “Going 60 miles an hour sliding on ice isn’t my idea of fun,” says Olsen over the phone from Park City, Utah, where production on the indie thriller is set to begin in a few days. “But I got used to it and loved it. It’s absolutely breathtaking 10,000 feet up here in the mountains.” Olsen—just back from a three-hour excursion with her co-star Jeremy Renner and the film’s stunt coordinator—says that it was one of those days that remind her why she does what she does: “It’s pretty fucking awesome.”

That’s another thing: Olsen peppers her conversation liberally with the f-bomb, but she does it in such a matter-of-fact, low-key way that you stop noticing it until you, say, transcribe a conversation and see how often it comes up.

“Low-key” also describes ELLE Canada’s day shooting the actress in New York: In fact, one staffer, on her way into the studio, passed a young woman in a trench coat waiting in the lobby and it only hit her about five minutes later that that was our cover star. And that may be exactly how Olsen wanted it.

“A lot of the time in my life, I try not to take up space—I just want to disappear into a wall,” says the 27-year-old. “And then eventually, when I’m around people I feel confident with, I’ll take up more space.”

As the younger sister of a certain Mary-Kate and Ashley, the world’s most famous twins, Elizabeth Olsen didn’t quite grow up in the spotlight, but she certainly felt its glare. (Although she’ll be the first to tell you she had a “beautiful” childhood in Los Angeles filled with happy times playing outdoors, baking cookies and taking full advantage of being the youngest of four.)

Olsen studied acting at NYU’s Tisch School of the Arts after high school. In 2011, her performance as a young woman who’d escaped from a cult in Martha Marcy May Marlene earned the then 22-year-old crit­ical acclaim and indie-darling status that had nothing to do with her famous last name.

Fast-forward five years and Olsen has managed to strike an enviable balance in Hollywood. She has scored herself a steady paycheque with an ongoing role as the Scarlet Witch, a quirky sorceress in the Marvel superhero pantheon. Olsen originated the role in last spring’s Avengers: Age of Ultron and reprises it this spring in Captain America: Civil War, out May 6. (“So, so fun” is how she describes her experience.)

And while she’s thriving in big-studio productions (she was also in 2014’s Godzilla), she still manages to squeeze in smaller films, like this spring’s Hank Williams biopic, I Saw the Light, during her months off.

“The only thing I care about is if the team is great, the script is good and the character is someone I can connect to in my gut. After that, it’s just a fun fucking job,” says Olsen, who does say she probably would have made more “interesting” decisions after the success of her first role if she’d believed the next-big-thing hype around her. “I don’t have any regrets—I was just so happy to be working—but I was forcing myself not to give power to ‘the system.’” And then, with a flash of the level-headed pragmatism Olsen displays over and over again in conversation, she adds: “But the system does have power, and I’ve learned how to use it. It’s smarter than to ignore it.”

What Olsen means by “using the system” isn’t as mercenary as it sounds—it’s just being choosier about dir­ectors and producers than she was when everyone kept telling her Martha Marcy May Marlene would change her life and she couldn’t quite believe them.

Something that she says she won’t regret holding out on is social media: Olsen has famously been disinterested, and that’s not changing anytime soon. She doesn’t have a presence on it and has no plans to start, despite the growing pressure for actors to have huge numbers of followers. “I just have an old-school mindset. Also, girls I look up to, like Jennifer Lawrence, Rooney Mara and Alicia Vikander, don’t have it, and it hasn’t affected their careers remotely.”

Olsen acknowledges that celebrities can use social media for things like drawing attention to pet causes and connecting directly with fans, but it’s that “celebrity” factor that gives her pause. “I’d rather live as private a life as I can. I’m not trying to be a mysterious person, but I’d rather be seen as an actor from job to job,” she says. “I’ve never lived my life trying to be an influencer; I’m happy keeping my own opinions for fun dinner conversation.”

For Olsen, the “sacrifice” of opening her life up to public scrutiny outweighs the potential for doing good. Nor does it seem to be a tempting avenue for setting the record straight when it comes to her love life. (Since breaking off her engagement to actor Boyd Holbrook in 2014, Olsen has been “linked” to Chris Evans, Alexander Skarsgård and, most recently, her I Saw the Light co-star Tom Hiddleston.)

Olsen says it’s just something that is “in her bones” and influenced heavily by her notoriously private older sisters. “From an outside point of view, people have an interest in people they’ve seen grow up,” she explains. “But no one in my family has ever cared to feed into that or make it more interesting than it is because, really, it’s not.”

Unsurprisingly, Olsen also isn’t a huge lover of fan mail. “When I’m filming on location, our production office is listed and people send stuff. It makes me uncomfortable. I don’t want people to know what I’m up to or where I am.”

It’s also why Olsen is still renting in L.A. (She lives with a roommate, a bestie since middle school whom she loves to cook for, FYI.) “The moment I own a house, it becomes public knowledge,” she says, going on to describe the “crippling” nature of paparazzi in L.A., where, after being spotted, she won’t go home for several hours in case they follow her. “It’s pretty violating. At night when you can’t see anything because the flashes blind you, that’s really disconcerting.”

It’s no wonder, then, that when it comes to her style, Olsen talks about wanting to feel “safe” on the red carpet in front of photographers. But that’s something she’s working on overcoming. “I’ve been very conservative, but I’m trying to allow myself to feel confident with being sexy,” says Olsen, who shopped for flannel shirts and cargo shorts in the boys’ department at Gap when she was a kid because being a tomboy made her feel “tough.” There was also an Annie Hall phase in high school where she wore suspenders and blazers.

“Now I like being a woman and I like wearing dresses, but my comfort zone isn’t frilly and girlie,” says Olsen, who admits she felt a little “uncomfortable” with the pastels and ruffles she wore for our photo shoot. “Diane Keaton is sexy as hell, and I haven’t seen her neck in years,” she says, laughing. “I think feeling empowered as a woman is so different for each person. It’s a personal preference.”

Another woman Olsen admires intensely is the “incredible” Scarlett Johansson, her co-star in Captain America: Civil War. “She has had the ideal career,” says Olsen. “She’s still able to work with the Coen brothers and Spike Jonze and be the lead female in one of the most successful action films around.”

Before ScarJo-level world domination, however, Olsen needs to learn how to use her iPhone. “I need help! For the longest time, people would send me text messages and it was all just alien faces. And then my friends were like, ‘Lizzie! Update your emojis!’”

The one aspect of the wired world she is all about? A “very practical” (of course) app that sends a masseuse to your house on demand. “That’s pretty fucking cool to me! What more do you need?”

EXCLUSIVE: Iggy Azalea as you’ve never seen her before