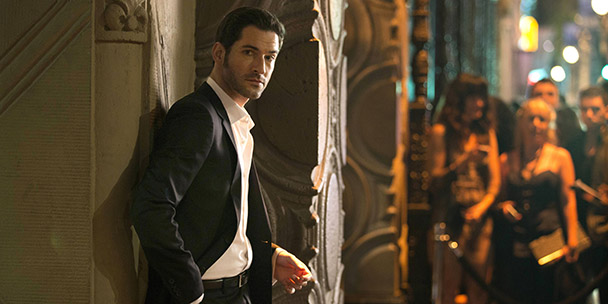 For audiences elsewhere, the Londoner’s visage will soon conjure up something very different. (Think the devil himself…literally.) Ellis plays the title role in the FOX series Lucifer—a sexy, charming imagining of what happens when heaven’s most famous fallen angel leaves hell and takes up residence in the City of Angels (with a sideline as a detective)—which premiered this week on CTV in Canada.

“It’s the ultimate redemption story,” says the 37-year-old father of three. “Lucifer is a classic case of labelling: Am I bad because dear old Dad [a.k.a. God] says I am, or am I inherently evil? That’s what we explore in the series.”

Here are four more reasons to be tempted by this “devilishly cheeky” actor.

2. He’s ready to leave Gary Preston behind.
“To be in a show like Miranda that captures everyone’s imagination is amazing, but it’s hard when people can’t see beyond that. I started travelling to North America because Miranda was so popular in the UK; I always knew I wanted to challenge myself and not go for the obvious roles. A lot of actors will tell you it’s a lot more fun to play people who are morally ambiguous than it is to play the good guy.”

3. He’s not Australian.
“Every time I get in an Uber in L.A., they’re like, ‘Oh, great accent. Are you from Australia?’ I constantly have to repeat myself when I’m in North America because no one understands a word I’m saying. I’m like, ‘We [British] invented this language!’”

Actress Stella Maeve dishes on your next magical TV obsession