Everything We Know About the Royal Baby 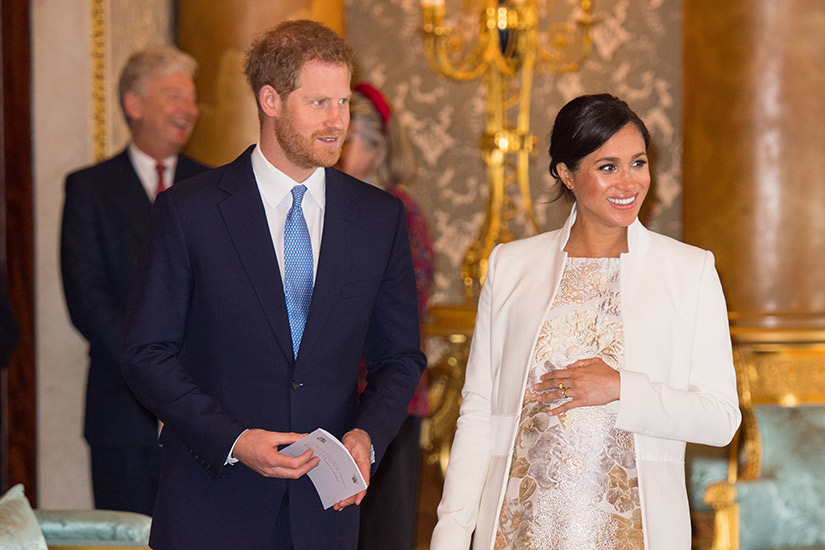 That’s right—Meghan is officially on maternity leave, awaiting the arrival of her first child. Here’s everything we know about the soon-to-be newest addition of the royal family.

Back in January, Meghan revealed that she was six-months pregnant to a crowd in Birkenhead, England. This would put Meghan’s due date at the end of April or early May a.k.a soon.

When did the royal family find out about the pregnancy?

According to royal correspondent Rebecca English, Meghan and Harry told the fam at Princess Eugenie’s wedding in October. William and Kate are “delighted” for the couple, as is the rest of the royal family.

Where will the baby fall in the line to the throne?

Any of Meghan and Harry’s children will, of course, fall right behind Prince Harry in the line of succession. Harry is currently sixth in line to the throne, so Baby Sussex will be seventh. If Prince William and Kate have any more children, then both Harry and the baby will move down the line.

Meghan and Harry’s firstborn will always keep its spot behind Harry in the line of succession, regardless of whether the baby is a boy or girl. This is thanks to changes in legislation introduced in 2013, boys will no longer move ahead of their older sisters.

Of course, Meghan and Harry won’t offer any insight into what they’ll actually name their child until the birth, but that hasn’t stopped English bookkeepers from setting odds. Most recently, U.K. bookkeepers Ladbrokes have set Elizabeth as the most likely name, provided that the baby is a girl, with Diana following closely behind.

Last year, however, historian and royal expert Carolyn Harris told us that because Harry and his children are further down the line of succession, he and Meghan have a little more freedom when choosing names. That means they could pick something more creative instead of sticking to the traditional royal names—maybe just not as untraditional as, say, anything fruit-inspired.

What will the baby’s title be?

One thing is certain: they won’t be a Prince or Princess—unless the Queen steps in. As per royal tradition, only the eldest son of the Prince of Wales’ son—so, Prince George—gets an HRH title (although Queen Elizabeth granted one to both Charlotte and Louis as well). If Baby Sussex is a boy, he’ll likely take on Harry’s second title, Earl of Dumbarton (also given to him on his wedding day), while a little girl will likely receive the title of Lady Mountbatten-Windsor, the personal surname of the Queen’s descendants.

Where will Meghan give birth?

Rumour has it that the staff at the Lindo Wing at St. Mary’s Hospital in London—where both Princess Diana and The Duchess of Cambridge gave birth to their children—have been asked not to take holiday in April, according to The Telegraph. It makes sense that Meghan and Harry would head there to welcome their little one into the world. Close friend of the family Amal Clooney also gave birth to her twins at this luxe, private maternity ward complete with in-house chefs and celebratory high tea or champagne. Labour doesn’t sound so bad after all.

Where will the royal baby be raised?

Meghan and Harry will make Frogmore Cottage—gifted to the couple by the Queen—their official residence. Don’t let the word “cottage” fool you: the 35-acre Windsor estate is undergoing extensive renovations costing between $4.3 to $6.6 million (that’s Canadian dollars) as first reported in The Times. Vicky Charles, Soho House’s top interior designer, is reportedly leading the charge to transform Frogmore into Meghan and Harry’s country-chic dream home. Possible features include a yoga studio, a green-energy unit and lots of extra space for Markle’s mom, who will reportedly be staying with the couple for those initial what-do-I-do-with-this-newborn weeks.

Who are the potential godparents?

As we’ve seen with Will and Kate’s kids, royal babies typically have several godparents representing both sides of the family. We wouldn’t be surprised to see at least one of these people among the pack: Meghan’s Canadian BFF Jessica Mulroney, Princess Diana’s sister Lady Jane Fellowes, Harry’s cousin Zara Tindall—who recently made Harry a godfather to her youngest daughter Lena—maybe even the Clooneys. (Okay, that last one is just wishful thinking on our end. In February, George joked to Australia’s Who magazine, “Oh yes, I’ll be the godfather of the royals apparently,” followed by an immediate, “No!”)

Don’t expect to see Will or Kate make the list either. Members of the royal family don’t typically choose their siblings to be godparents. Plus Uncle Harry isn’t a godfather to any of Will and Kate’s children, so it’s only fair.

What have Meghan and Harry said about raising their baby?

Both the Duke and Duchess have given small insights into their parenting philosophies at various events. During his speech at The Commonwealth Youth Roundtable, Harry spoke about how becoming a soon-to-be father has made him “acutely aware of our social responsibility to make this world more resilient and its inhabitants more accountable.” And when Meghan was a speaker on an International Women’s Day panel, she joked about feeling “the embryonic kick of feminism,” and was open about wanting their child to be a feminist: “Boy of girl, whatever it is, we hope that’s the case,” she told the audience. We hope so too!

Anything else we should know?

Here’s a fun fact: Spring sure seems like a good time to have a royal baby! If Meghan gives birth in April, Baby Sussex will share a birthday month with cousin Prince Louis, who was born on April 23 last year. Also born in April? The Queen, who will be celebrating her 93rd birthday (NBD) on April 21. And if Baby Sussex keeps us waiting until later this month/early May, Princess Charlotte—who was born on May 2, 2015—could have a fellow Taurus playmate.